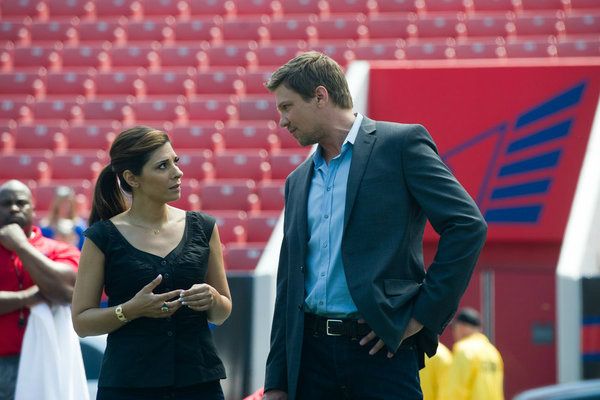 Well, Team USA fans, it’s the end of the road for populist television enthusiast Juliet Litman. This will be the last entry in her rough guide to the lawyers, spies, and rogue medical practitioners of the USA Network. If you’re not ready to say good-bye, we suggest a Suits marathon to ease the pain.

There’s just one show left from USA’s summer slate that has yet to get its time in the spotlight: Necessary Roughness. I’ll admit up front that I don’t watch this show. Though I enjoyed Mehcad Brooks on Desperate Housewives, his presence alone was not enough for me to dive into the orange-hued Long Island of psychiatrist/hypnotherapist/“hot doctor” Dani Santino when Necessary Roughness premiered last year. But ignoring even a single show from this vision quest seems like it breaks an unofficial code. Thus, I decided to give this one a try by rewatching the pilot and a random episode from the current season.

This is the show for you if you like: Grey’s Anatomy. This show opens with the Black Keys’ “Howlin’ for You” playing while soon-to-be-cuckolded Dani Santino (Callie Thorne) wakes up in bed with her husband. (Within minutes we find out that he is cheating on her.) The tone, complemented by the hip music, is strikingly similar to what you might find in a mid-season episode of Grey’s in which Meredith might be circumnavigating and narrating the drama, and I wouldn’t be surprised if this pilot was crafted out of a rejected spec script. Alas, Dani is no surgeon. Rather, she’s a therapist who, while being a supposedly talented shrink, put her family first instead of pursuing a more prestigious career route. However, now that she is getting divorced and her kids are in high school, she’s ready to rise to the top of the psychology game as a sports therapist, specializing in mental cases. Her first, marquee client is Terrence “TK” King (Mehcad Brooks), the star of the New York Hawks football team. I think it’s safe to assume that Ron Artest’s 2010 interview following the Lakers’ Finals win inspired this show, and he should be fighting for an EP credit.

The person you are most likely to recognize from a previous show or movie: If you don’t recognize Scott Cohen, a.k.a. Max Medina from Gilmore Girls, go Netflix the first two seasons of that show now, and then disregard all of his work on Necessary Roughness. Cohen was perfect as Max, Rory’s teacher and Lorelai’s fiancé — in fact he was so perfect that I suspect (or perhaps want to believe) that he was barely acting at all. Now, he has been cast as this show’s Michael Clayton: He cleans up TK’s messes and keeps Dani on track. Except he is not Clooney and this show does not reside in the same hypothetical motion-picture universe. (On the other hand, only in a different universe could one contemplate Scott Cohen as a slightly mysterious, often terse fixer, and that alternate universe may be the USA Network.) There’s a coterie of other recognizable faces — Evan Handler (Sex and the City), Gregory Alan Williams (Remember the Titans) — but no other casting is as egregious.

The basic plot you need to know: Dani Santino is now not just a therapist for one athlete, but she is the go-to therapist for all athletes in need of tough love. Meanwhile, her first patient, TK, is recovering from a gunshot he suffered at the end of Season 1. So now he’s a head case with physical injuries. Dani has already been in a relationship and has broken up with the Hawks’ athletic trainer (the same guy who led her into sports therapy anyway), and now they are dealing with the breakup. And like Emily the Bachelorette mom, Dani is very dedicated to her teenagers and their attendant drama. Her daughter started as the wild one, but now her son is — GASP — having sex.

Final argument: Ultimately, Grey’s Anatomy this show is not. Haters may take issue with that show’s heavy-handed, thematically linked medical subplots, but they not only offer structure that has helped keep the show running for many years, but they also allow for filler dialogue that sounds plausible. When the legal jargon comes out on Law & Order, it’s technical and specific enough so that you don’t completely understand it but you buy into it. The problem with Necessary Roughness is that Dani’s work is too transparent and implausible. The effort to make her seem like an effective and talented therapist is quite shallow. Maybe Dr. Hank on Royal Pains is a magical doctor who can cure anyone over the course of an episode. Fine, we can believe that. But the patients who Dani treats cannot be healed in 42 minutes, and the language she uses to talk to and about her patients is not sufficiently exotic. As far as I know, that’s not how therapy works. USA shows hum along because the structural conceit is innocuous enough to become a mild concern. The absurd therapy sessions here, coupled with the preposterous casting already discussed, are too distracting.

Randy Travis Gets Arrested In a Trans Am While Drunk and Naked, Accidentally Fulfills Country's Rebel Outlaw Stereotype