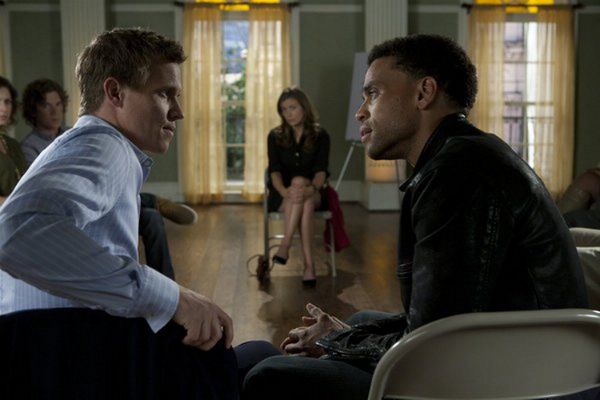 It’s officially August. The fall shows are coming. You’re holding your breath until Connie Britton makes a triumphant return to network television in Nashville. What will you do until then? It’s the perfect time for a television marathon! Fortunately, USA’s newest original series Common Law premiered this summer, and though it started back in May, using On Demand, iTunes, and some creative Internet sources that we in no way encourage or endorse, you can easily catch up before the season finale on August 10. Given the wacky USA scheduling system, season 2 (or season 1, part 2?) can’t be too far off.

This is the show for you if you like: Starsky and Hutch and you’ve run out of episodes of White Collar. Common Law seems to be USA’s answer to TNT’s Southland, though, of course, it’s not quite as dark, tonally or visually. Travis Marks (Michael Ealy playing the functional equivalent of Hutch) and Wes Mitchell (Warren Kole playing the functional equivalent of Starsky) are Los Angeles detective-partners sent to couples therapy (cue the innocuous-yet-retrograde gay jokes) because they constantly bicker. They’ve been working together for five years, and somehow, this small twist feels like a refreshing variation on the odd-couple cop conceit. Don’t we usually meet these partnerships as they’re forming? Wes and Travis are almost a bizarro version of Neal and Peter from White Collar: instead of fast-paced banter on the slick streets of New York, these detectives drive around Los Angeles trying to one-up each other.

The person you are most likely to recognize from a previous show or movie: Michael Ealy or Sonya Walger. Both of these actors should be more famous. After the two Barbershop movies, Ealy seemed bound for higher profile, consistent work. Maybe this will be his decade: After bouncing around from FlashForward, The Good Wife, and Californication, let’s hope he settles into his “bad cop” role. Sonya Walger is another FlashForward alumna, and on this show she plays the very wise therapist who leads the couples group sessions each week. But more important, she will forever be Penelope “Penny” Widmore from LOST. As a devoted Penny-Desmond ‘shipper, I thought Walger and Henry Ian Cusick easily could have been LOST’s breakout stars. But maybe because of fans like me, Walger will never be able to escape the legacy of the show. All I can say is, four years later, I’m not over this:

The basic plot you need to know: This first season has been propelled by the relationship drama between our two cops. Travis is the leather-jacket-and-henley-wearing playboy who has slept with virtually all of his female coworkers. He was raised in eighteen foster homes, which is why he is now the more reckless partner. (If there are any lessons to be learned from this summer-long exercise, it’s that, on cable, absentee parents can explain any socially destructive or unexpected behavior, and that a professional background in high-level insurance makes you a savant.) Wes is the suit-no-tie-wearing lawyer turned detective who has not moved on from his divorce. He has had no serious relationships in the 18 months since his separation and won’t even commit to a new home or apartment. Ultimately, they try to make their partnership work because they are committed to justice. They are cops, after all!

Final argument: Common Law takes cues from almost every other USA show. It has White Collar’s team aspect, and Travis and Wes fight like the brothers on Burn Notice. Each episode features a literary quote meant to shed light on the particular dynamic in play, which is akin to Michael Westen’s thematically relevant voice-overs on Burn Notice. Travis is reckless like Covert Affairs‘ Annie Walker. Both guys are ultimately softies who want to do the right thing, like Mike and Harvey on Suits, and they even have a benevolent supervisor (played by Jack McGee) like Jessica Pearson. And yet, Common Law does not feel like the USA-show blended-smoothie that it could. Maybe it’s because this is the first show set on the West Coast. More likely, Common Law remains enjoyable because the plots are not necessarily recycled, but rather the most interesting character traits have been repurposed. Apparently this is an effective strategy.