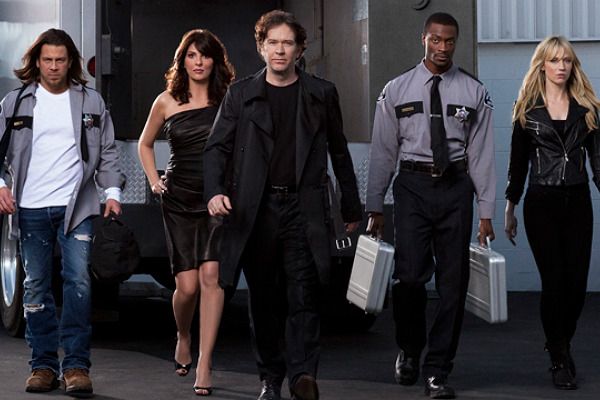 This summer, populist television enthusiast Juliet Litman is watching the best shows that the fan-loved, yet often critically overlooked, USA Network has to offer. Each week, she’ll give you a rough guide to the lawyers, spies, and rogue medical practitioners on summer’s favorite channel.

We’ve reached a crossroads with this Team USA endeavor. On July 15, the fantastic Leverage returned for its fifth season. On TNT. However, Leverage is the true summer cable television gateway drug: It’s almost like the proto-USA show. You can jump in at almost any point, there’s a stable of vaguely familiar regular actors, a bevy of former celebrities who pop up for short arcs, and non-competing single-episode and season-long plot arcs. If I had to guess, the only reason why Leverage was not picked up by USA is because the sky is rarely blue. This season is set in the cloudy Pacific Northwest, but it seemed like it was always gray anyway.

This is the show for you if you like: Robin Hood and Ocean’s 11, but you don’t have the patience for a long con. Each episode of Leverage brings you a new caper. Timothy Hutton plays Nate Ford, the leader of a five-piece band of thieves who use their respective skills to help the needy people that official purveyors of justice don’t serve. Usually in the first or second act of the show, Nate declares, “Let’s go steal a _____!” and the crew sets off on their mission to bring down crooks of varying threat levels. The team consists of Sophie the grifter, (Alec) Hardison the hacker, Eliot the hitter (a.k.a. the muscle), Parker the thief (she really excels at rappelling down tall buildings; she’s a cat burglar of sorts), and Nate the mastermind. In the pilot they were supposedly going to work just one job as a team, but five seasons later, they’ve relocated to Portland together. An occasional two-parter aside, each episode delivers a tidy con, a moral reckoning, and the essential reveal of how the con was executed. If you only watched this past Sunday’s episode, you would not know that there is a nefarious subplot afoot. Leverage is concerned with the here and now.

The person you are most likely to recognize from a previous show or movie: Aside from Timothy Hutton, who is legitimately famous and now riding out his career on TNT, you might know Aldis Hodge, and if you don’t you should. He had an arc as Ray “Voodoo” Tatum on Friday Night Lights, among many other television appearances. Of the five principals, he is most likely to break out of the basic-cable barn. Like his brother Edwin Hodge, who has graduated from B-list television (you’ll always be A-list to me, Jack and Bobby) to the upcoming Red Dawn, Aldis seems primed to make that leap. Peep his scarf game: 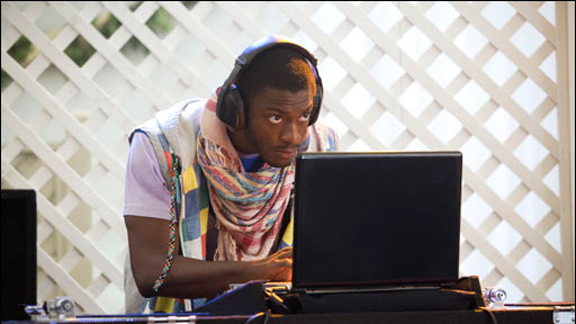 The basic plot you need to know: Leverage is probably the one show on television that requires the least amount of backstory to be enjoyed, because it’s — wait for it — character-driven. Whose characters are welcome now, USA? The wonder of this show comes from the fact that each character has been slowly fleshed out over five seasons. We know enough about each one to care about them, yet somehow there are still huge gaps that don’t affect enjoyment of the show. So, let’s get to know our favorite criminals:

Nathan Ford: Nate started out as an insurance assessor/risk management pro until a mistake he made led to the death of his son. He’s a recovering alcoholic, though the recovering part is often in question. He chooses the marks and somehow his experience in risk management makes him an expert con man, which is a concept cosigned by White Collar. He is our tragic hero.
Sophie Devereaux: She of ever-shifting British-ish-accent, Sophie is the all-purpose grifter, taking on a different persona central to the con each week. She has an on-and-off love affair with Nate, which is currently on, and she’s the maternal center of the group. At one point, Sophie fled to Europe, and the other four secretly called her because no one can survive without her guidance. Five seasons later, I have no idea where Sophie is supposed to be from, because her speech patterns are more confusing than Ryan Gosling’s.
Eliot Spencer: Eliot is simultaneously the most mystifying and the least interesting. He’s a muscle man with a heart of gold. Moving on.
Parker No Last Name: The main thing we know about Parker is that she doesn’t know how to make friends, which can be attributed to her upbringing in foster homes. She once attended some AA-type group (or was it a book group? Who knows. Irrelevant) as part of a con and she had to be coached by Sophie in how to interact with other people. She made her first friend here (outside her Leverage crew, that is), but of course, it didn’t last. For four seasons, Parker and beloved Alec Hardison have had a lovely and gentle flirtation, which has now blossomed into a full-on relationship.
Alec Hardison: Like his new girlfriend, Parker, Hardison is a product of foster homes. As the techy geek, Hardison is frequently steering the con, monitoring everyone else from some control room. As a result, he has become the comic relief of the show, the character afforded the most quips and witticisms. Hardison is the heart of the show, the Pacey Witter of the group.

These guys would have made a great Real World cast back in the day. They have the kind of variety that the Bunim-Murray producers would long for, though not enough drama. It’s fun to watch these five because they have relatively minimal infighting. However, that might change. The only sheer plotline you must know about is this: At the end of this season’s premiere, Hardison and Nate are seen together in a dark room. Hardison is carrying out some sinister, secret, techy action that only Nates knows about. Hardison says he is uncomfortable with it — especially keeping it from his new girlfriend, Parker — but Nate coaxes him into it anyway. That’s all we know so far …

Final argument: I would not be a USA Network devotee were it not for Leverage. A few years ago I began watching to fill a void, and I fell hard for this low-responsibility show. Unlike some other shows, you feel compelled to keep up with the plot through its many twists and turns, or the prestige cable shows that beg you to think about them for many hours after, Leverage is the easiest hour of your week. With uncomplicated villains, clear ethical choices, and truly lovable characters, Leverage is anathema to everything critics mean when they talk about the so-called golden age of television that we are currently in. It’s actually much more akin to a previous revered age: the network television of the 1970s with Mary Tyler Moore and her ilk. You come back for the characters because you like them, not because you are looking for a facsimile of what life is or was like. Somehow this trifle of TV show has carved out a niche.