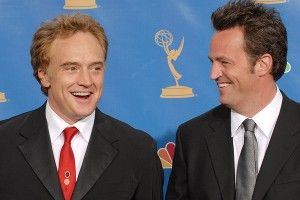 As THR points out, Bradley Whitford is appearing in an upcoming episode of Matthew Perry’s Go On — which, considering the, uh, less than pristine reputation of Aaron Sorkin’s one-and-done SNL-y-drama, is the closest we’ll most likely ever come to a full-fledged Studio 60 on the Sunset Strip reunion. Soak it up, Strip-Heads!

On the oft-maligned Bizarro–30 Rock, Whitford and Perry played the co-producers of the show within a show, but no word on whether we’ll get an actual reference back to Studio 60 on Go On; the only confirmed detail here is that Whitford is shooting an episode for some point this season. Oh, and Perry also tweeted, “Working with Bradley Whitford again is so much fun. I mean, I wish we weren’t in a hot tub together, but you can’t ask for everything.#GoOn” And then, like a roaring, all-consuming California forest fire, the #GoOn hashtag burned down the Internet.

By the way, the best part of the Whitford-Perry tag-team reuniting? THR using the opportunity to point out the other Studio 60 actors working today (“Sarah Paulson is starring on FX’s American Horror Story: Asylum, Columbus Short co-stars on ABC’s Scandal and Amanda Peet has been recurring on CBS’ The Good Wife … ”) as if we’re expected to applaud them and find inspiration in their willpower for having defeated a grave, grave illness.