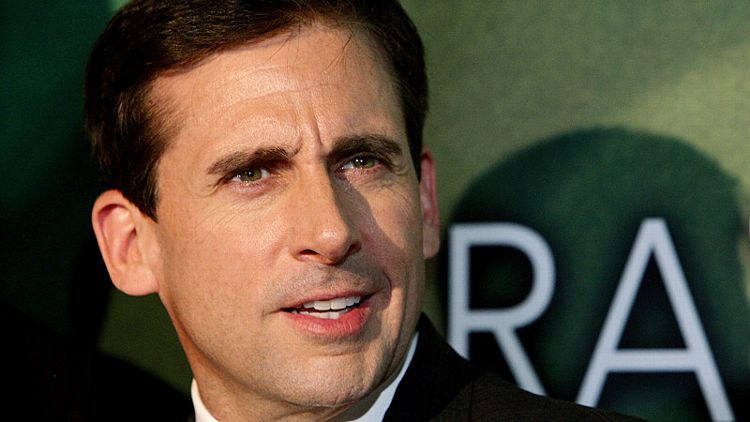 Steve Carell will star in Bennett Miller’s Foxcatcher, the long-gestating movie about John du Pont, paranoid schizophrenic heir to the du Pont chemical fortune. In 1996, in the wrestling-training facility he built called Team Foxcatcher, du Pont shot and killed his friend David Schultz, an Olympic gold medal-winning wrestler, then shut himself in his mansion negotiating with the police over the phone for two days. Wait — Steve Carell is going to murder someone? He better be practicing his serious face. Grade: A- [Showblitz]

Woody Harrelson is in talks for Now You See Me, a heist movie also starring Mark Ruffalo, Jesse Eisenberg, Morgan Freeman, Isla Fisher, and Melanie Laurent. Woody would play a magician who uses his Jedi-mind-tricks style in the services of the Four Horsemen, a crew of gentlemen-illusionist-bank-robbers who pull off their heists during their performances, then dole out the money to the crowds. Oh, you crazy-ass sounding movie, you had us at “Jedi mind tricks.” Grade: A [Showblitz]

Ellen Page has joined The East, a thriller written and starring industrious newcomer Brit Marling (Another Earth). The film revolves around a private firm that combats radical protest organizations for big corporations. Marling plays an agent for the firm that infiltrates an anarchist organization called The East, at which point she starts falling for its leader, Alexander Skarsgard. Page’s character, Izzy, used to be Skarsgard’s girl, and becomes jealous when he starts focusing his attention on Marling. There’s no Jedi mind tricks or anything, but this movie sounds pretty dope too. Grade: A [Showblitz]

They’re remaking Mortal Kombat! The classic fighting video game got a movie adaptation in 1995, and now it’ll come to the big screen again via director Kevin Tancharoen (Fame). The notable thing here is that it took Tahncharoen’s lobbying to get the project rolling at all: Kev made a ten-minute short on his own dime to show off his vision for another MK project, which eventually led to him being hired to helm a web series, and now to direct this movie. Heartwarming. Grade: C+ [HR]

X-Files creator Chris Carter is returning to the TV with Unique, a mystery police thriller with a female lead and — yessir — a supernatural element. The series is set up at Media Rights Capital, and will have Carter as a writer and executive producer. When asked what he was up to during his hiatus from television production, Carter explained that he had been spending a lot of time pitching for the Oakland A’s and playing linebacker for the Pittsburgh Steelers. Grade: B+ [HR]

Lost’s Carlton Cuse has teamed up with celebrity pastor Rob Bell to sell Stronger, a spiritual drama, to ABC. The show will have autobiographical elements from Bell’s life and revolves around Tom Stronger, a musician and teacher, as he sets out on his spiritual journey to become a guide to others. “Tom Stronger?” You sure on that one, guys? OK. Cool. Just checking. Grade: B [Deadline]

Malin Akerman will star in the Canadian dark comedy Cottage Country, as the lady to whom Tyler Labine would like to propose at his family’s cottage. Things go awry when Labine’s character’s brother, played by Daniel Petronijevic, and his wackadoo girlfriend, played by the ever-game Lucy Punch, show up. No magic tricks, anarchist organizations, or famous showrunners returning to their craft? Not your day to shine in Grading the Trades, otherwise-totally-fine-sounding Cottage Country. Grade: B [HR]

Filed Under: Grading the Trades, Now You See Me, Steve Carell

Dubstep Is Having the Worst Week Ever