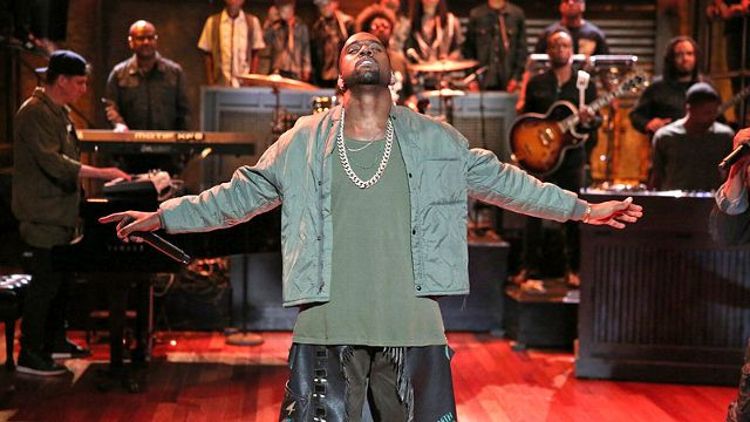 I didn’t write about “Bound 2” when I reviewed Yeezus in June because I didn’t know what to make of it. The album’s closing track is obviously gorgeous and superficially reassuring as a callback to West’s soul-sampling College Dropout aesthetic. But given what comes before that song on Yeezus, I couldn’t buy into the popular theory that “Bound 2” was somehow a “happy” ending to an otherwise diseased, exorcistic record. To me, “Bound 2” was like a warped parody of the “good” Kanye that people prefer to the more authentic “bad” Kanye that presides over the rest of Yeezus. (Only in the context of Yeezus could a line like “I wanna fuck you hard on the sink / after that, give you something to drink” pass for chivalrous.) “This might be what you want from me,” he seemed to be saying, “but can you really believe this bullshit after everything I’ve just shown you?” Watching the overtly cheesy video for “Bound 2” — dig the omnipresent Ellen logo, which only adds to the flimsiness of the presentation — confirmed this theory for me. “Bound 2” isn’t a love song, it’s a garish pantomime of love scoring cheap visuals and stiff “romantic” posturing. It’s a phony denouement to a downbeat story that passive-aggressively rubs the audience’s nose in its fakeness. I know people want to laugh at this video, and they should, because it’s knowingly stupid. But never forget: Nobody exploits the public’s need to feel superior to Kanye West better than Kanye West. He laughs harder, and more bitterly, than all of us.

This Halloween, instead of doing its customary set covering a classic album, Phish debuted a collection of strong (dare I say “surprisingly strong”?) new songs. Dubbed the “Wingsuit” set, it’s been in constant rotation at my house lately, particularly “The Line,” which has the best “extended instrumental coda” moment in any rock song since Deerhunter’s “Desire Lines.” Mark my words: If Phish just went ahead and released the “Wingsuit” set as its next album, it would signal a major creative resurgence for the jam-rock institution.

When I caught these Swedish pop-Satanists live for the first time last spring, I remarked to a friend that Ghost B.C. is like the ABBA of metal bands. I thought this was a mildly clever/insightful comment at the time, but in reality Ghost B.C. was already way ahead of me. This cover of a deep cut from ABBA: The Album (and the B-side to “Take a Chance on Me”) comes from Ghost B.C.’s new Dave Grohl–produced If You Have Ghost, which also includes covers of songs by Roky Erickson, Depeche Mode, and Army of Lovers. Apparently in Sweden, nobody can hear you scream — because it always comes out sounding so damn pretty.

Midnight Reruns, like yours truly, hail from Milwaukee, so I’m already inclined to love them. But what makes me truly love them is that the group’s excellent self-titled debut aspires to add to the great lineage of Midwestern power pop, aiming for the sweet spot between the first Raspberries record and Cheap Trick’s In Color. (I also detect a trace of Milwaukee’s entry in the ’90s poppy emo sweepstakes, the Promise Ring.) In “King of Pop,” Midnight Reruns pay tribute to NYC power pop godhead Paul Collins, though the drunken, hot dog–fueled revelry depicted in the video could only originate from my beloved Brew City.

The first time I heard this song, the antiseptic interplay between the faux-funky guitar scratches and ice-cold rhythm section immediately sent my brain scurrying for a reference point. The best I could come up with was the antisocial, death-jazz sensuality of Steely Dan’s Gaucho. The estimable Tom Breihan of Stereogum instead likened Blood Orange’s beguiling new record, Cupid Deluxe, to The Chronic in his review this week. I think Tom wins this one.

Horisont, “Writing on the Wall”

Your mid-column heavy metal smoke break, courtesy of yet another worthwhile Swedish band, Horisont, and its new album, Time Warriors.

Marissa Nadler makes stark, gothic metal with the volume turned off, so it makes sense that her forthcoming record July is being released by the punk/metal indie label Sacred Bones. “Dead City Emily” is typical of Nadler’s style — she may gently coo her way through the song’s ethereal mist, but the underlying intensity hits just as hard as a Marshall stack.

Not to nitpick, but it would be more accurate to call this “Sounds Like Prime-Era Jawbreaker.”

As a member of the legendary found-object rock band the Shaggs, Dot Wiggin was an early pioneer of outsider pop, guilelessly exploring the possibilities of music situated beyond structure, melody, and even basic instrumental competency. The Shaggs’ sole album, 1969’s Philosophy of the World, is prized as much for its lack of self-awareness as its bizarre originality. “Banana Bike” from the recent Ready! Get! Go! — Wiggin’s first solo effort, recorded in collaboration with a band headed up by New York musician Jesse Krakow — is far more aware of itself and a lot less original, tending toward traditional (if decidedly loopy) garage rock. It’s still a whole lot of fun, and I imagine probably closer to what Wiggin originally intended Philosophy to sound like way back when.

Last week, Aaron Freeman posted a small batch of demos representing his final work under the guise of Gene Ween. For fans who still haven’t accepted Ween’s breakup, this represents the most definitive sign yet that the late, great band is finished. My heart is heavy as I type this, but I think it’s time to finally pour one out for ol’ Gener.

Filed Under: Kanye West, Music, Songs of the Week