Songs of the Week: The 10 Most Important Eurovision Finalists 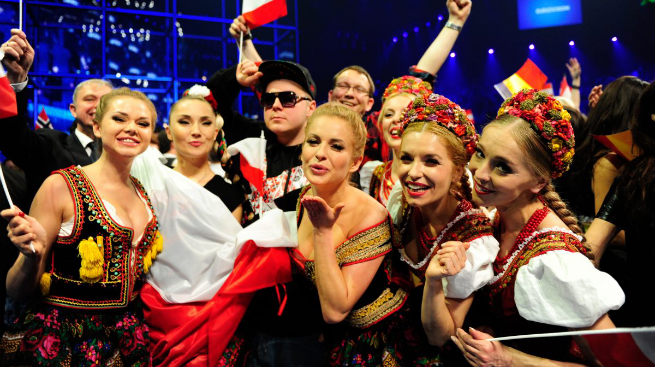 Where do cheesy pop music and fervid nationalistic competition meet? At Eurovision, of course! The annual televised song competition is always packed with sentimental ballads, and I happen to be more partial to the uptempo jams that attempt to merge historical local folk music traditions with more current musical trends (dubstep drops, prost!). Twenty-six countries remain in the competition for this weekend’s Grand Final, and in choosing my top 10 I’ll admit I laid off the more serious fare and Mumford & Sons clones in favor of the novelty songs. I know that you, like me, are most interested in songs with titles like “Cheesecake” and “Moustache.”

Nothing like a song that starts all pianissimo and builds to incorporate strings and horns, and then suddenly when you least expect it two minutes in WOMP WOMP WOMP WUB WUB WUB (dubstep) and then just nonstop climaxes and then shhhh.

Conchita Wurst is an Austrian drag performer who performs with a beard. Wurst graduated from the Graz School of Fashion, and has become an Austrian reality star, participating in shows like The Hardest Jobs of Austria and Wild Girls. The selection of Wurst as Austria’s contestant has been controversial at home, which is all the more reason for her to RISE LIKE A PHOENIX AND FLY ABOVE ALL THE HATERS!

Listening to Teo pronounce “Jennifer Grey” is a highlight. Apparently Teo gets compared to Robin Thicke a lot, which I didn’t know until the Eurovision website told me, and then it all made sense. Teo had to take “Google Maps” out of this song, because mentioning brands by name violates Eurovision policy, which was a caveat that Valentina Monetta learned in 2012 when she had to change her entry’s name and lyrics from “The Facebook Song” to “The Social Media Song.”

A whimsical pop-punk song about tolerance and how everybody “looks the same on the inside.” The video is charmingly art-directed, reminiscent of the Supergrass video for “Pumping on Your Stereo.” Who knew Iceland, home of Björk, could be so … normcore?

This is basically what would happen if “Country Grammar” mated with the Pussycat Dolls. It’s so weird and atonal and sexy yet offputting, so naturally I love it. Accordion, reverb-y claps, and cleavage-y butter churning. The elderly women interspersed with the video babes might be a nod to Russia’s Buranovskiye Babushki (“Buranovo Grannies”), who took second place at Eurovision in 2012 with their song “Party for Everybody.” This is my personal favorite this year. I like how it expresses its nationalism by declaring that vodka is superior to other liquors. “We’re the Slavic girls / we know how to use our charming beauty!”

Part of the fun of Eurovision is buying into its whole trashy aesthetic, refined through decades of variety shows. Twin Twin understand how to play the game; by making your song about mustaches and setting it at an ’80s game show. This party rocker could be a legit summer hit on its own merits. Aren’t we at the point where it’s time to start getting nostalgic for early-2000s nostalgia for the ’80s? Ironic mustaches and trucker hats are back! C’EST COMME CI, C’EST COMME ÇA!

This terrifying Russian pop duo is what would happen if the twins from The Shining grew up solely on Kylie Minogue. This is a perfect Eurovision entry in every way, from the dated-looking video to the matching dresses, glitter, and triumphant, meaningless chorus.

This song is so horrible and catchy, I’m pretty sure it was built in a lab to drive people crazy. Imagine Bruno Mars and Maroon 5 Jell-O wrestling with Jason Mraz. It could totally win.

OK, one Mumfordstep song. But just ONE. This has banjo and whistling because, I don’t know, there must be a Swiss bluegrass scene? If you tolerated OneRepublic’s “Counting Stars,” you’ll be able to tolerate this. The name “Sebalter” is just so Swiss. Sebalter “played the bass in a Swiss hard rock band called ‘The Stalkers’, specialized in covers of early ’70s groups as Uriah Heep, Deep Purple, Led Zeppelin, etc.” before getting into folk.

Of course I had to include the singularly named “Molly” (last name: Smitten-Downes) and this Game of Thrones—scented cosmic dubstep epic. Why not just get Ellie Goulding though, U.K.? She’s already on the queen’s payroll and does this specific genre of pop song better than anyone in the game right now. I keep mishearing the chorus to this as “Chillin’ in the universe” and I choose to continue hearing it that way.