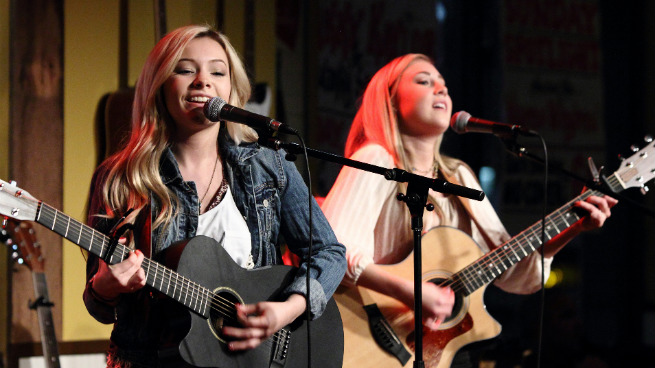 It’s social justice, y’all! Ever since Kacey Musgraves broke through, it’s been open season on country music’s traditional values. Maybe the Dixie Chicks really deserve the credit for busting open the whole “Okie From Muskogee” straight-and-narrow stereotype that pervades the mainstream country industry. Maddie & Tae offer a heartfelt plea to bro-country singers to cool it with the video hoes.

Jenny Lewis is Gram Parsons and Emmylou Harris rolled up in one candy-airbrushed rainbow pseudo–Nudie suit. “The Voyager” is the title song from Lewis’s new album of the same name, a long-playing record stocked with existential burners you can sip sweet tea to.

Although it is not the Mariah Carey song of the same name, Drake signee PartyNextDoor’s “Thirsty” is also very refreshing, particularly when it turns into a Jodeci song about three-quarters of the way in.

This dancehall song about the dietary supplement spirulina by Chronixx is the best dancehall song ever about pressed juice. I’m like 90 percent sure spirulina isn’t a euphemism for weed in this context.

Penney, cofounder of the New York avant-garde drag collective Chez Deep, has a vulnerable voice with a romantic Bryan Ferry quiver. Produced by Nick Weiss, a.k.a. Nightfeelings, “I Remember” is the latest single from Penney’s debut, Window. The video stars Penney and drag performers Dia Dear, Glamamore, and VivvyAnne ForeverMORE lip-syncing the instantly iconic chorus: “When I’m singing I remember, when I’m dancing I remember.”

Forget about Katy and Ariana. This summer’s true queen of the breezy pop hit is Becky G, whose “Shower” is this year’s “Call Me Maybe”: frothy, endlessly catchy, perfect for BBQs and roller skating.

Call it the Lorde effect. Blame it on Flying Nun or OMC if you like, but pop music from New Zealand is here to stay. Broods are the sibling duo Georgia and Caleb Nott, whose “Bridges” already peaked in Australia and New Zealand but is just hitting the U.S. charts.

Harnett is a singer-songwriter who did the vocals for Disclosure’s “What’s in Your Head” and “Boiling.” Harnett is a soulful dance diva with a Lisa Stansfield voice and an Everything But the Girl melancholy tinge. “No Other Way” is a collaboration with U.K. production duo and fellow Disclosure affiliates Snakehips.

Coronel is a banda singer from Tucson who gave up boxing in favor of a singing career after a video of him singing in the ring after a match brought him fans on YouTube. He was signed at the age of 16, and at 18 is the social media–anointed prince of the regional Mexican radio format. The video for “Tenerte” depicts an American Graffiti–style ’50s fantasia, with Coronel as the Archibaldo Gómez at the center.