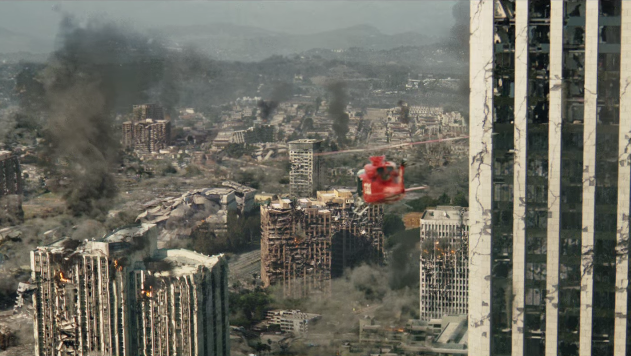 What does a disaster movie sound like? Besides the panicked screams of horrified bystanders, the cacophonous mélange of thundering explosions, and the incessant whirring of rescue helicopters, you can almost always count on an irritating pop song designed to remind you of the “unbreakable human spirit” in the face of bloody calamity.

The newest entry in the explodo-porn genre, Dwayne Johnson’s San Andreas, has just about every cliché in the disaster book, but is missing a schmaltzy theme song. How is there not a theme song? Was the director asleep during postproduction? Is this amateur hour? Is this even a disaster movie? They couldn’t get the modern equivalent of Celine Dion to cobble together a few stanzas about “eternal love”? Was Christina Aguilera really that busy? For god’s sake, can I borrow a feeling?!

These films need sentiment to balance out the nihilism that comes from watching civilization crumble in exacting detail over and over again. Without rousing music and a hot make-out session between the romantic leads at the end, you’ve got The Day After or, worse, real life.

Like an oncoming wall of flames you can’t escape, here are the most memorable songs in the disaster movie genre, in no particular order.

“My Heart Will Go On,” by Celine Dion (Titanic)

One of the earliest examples of the disaster genre, 1936’s San Francisco1 had a theme song, though it’s not particularly romantic. During the disaster-movie boom of the 1970s, the themes for The Poseidon Adventure and The Towering Inferno became chart-topping successes and were nominated for Academy Awards for Best Original Song.2

A year after the release of Independence Day, James Cameron’s Titanic sent the second disaster-movie boom into overdrive in 1997. And what would Titanic be without Celine Dion’s indomitable, irritating masterpiece? I hate this song. When I was 13, this song was at every school dance, on every radio, and carved into the Trapper Keeper of anyone who was obsessed with Titanic (i.e., everyone). Where Independence Day was about wisecracking bros punching aliens in the face, Titanic was an epic love story that spanned decades. It should be no surprise which one was more popular.

“I Don’t Want to Miss a Thing,” by Aerosmith (Armageddon)

Probably the GOAT of disaster movie theme songs. As important as “My Heart Will Go On” is to the genre, “I Don’t Want to Miss a Thing” is bigger, bolder, grander, and has the added benefit of not being sung by Celine Dion. I am not ashamed to say that those first string notes make me want to run into the middle of the street, naked and crying like the day I was born.

Also, this freakin’ music video! Aerosmith, an orchestra, and some primitive CGI interspersed with scenes from the movie and shots of people watching Steven Tyler make love to his microphone 3 on their television screens. The lyric “I don’t want to miss a thing” isn’t just a reference to hunky A.J. Frost trying to stay alive so that he can spend every waking moment with his beloved Grace. It’s also a command for all of us in the audience to stay in our seats and keep our eyes open like Malcolm McDowell in A Clockwork Orange so we don’t miss even a second of hot, hot spectacle. GOAT movie, GOAT song. I love you, Armageddon!

“Come With Me,” by Diddy & Jimmy Page (Godzilla)

This is not quite a love song, unless you consider the love between Diddy and money expressed by his decision to draw and quarter Led Zeppelin’s “Kashmir” for the soundtrack to the abominable 1998 Godzilla. Like the Pied Piper of Awful Movies, Diddy commands us to come with him to the local multiplex, where they are showing Godzilla on all 15 screens and the popcorn flows like wine. Come with Diddy to a land of enchanted Brodericks, where iguanas walk the earth and everything hurts.

The film industry waited 34 years to remake The Poseidon Adventure for the big screen, but only nine years to make a grab for those sweet, sweet Titanic dollars with another sinking-ship film. Poseidon was a huge bomb, but not for lack of trying. The crew of the SS Scrublord included Kurt Russell, Richard Dreyfuss, Andre Braugher, and Stacy Ann Ferguson, a.k.a. Fergie of the Black Eyed Peas. You don’t hire a singer for your summer movie unless you expect them to belt out a pop song as part of the deal. Fergie performed two tracks for the Poseidon soundtrack: “Bailamos” and the Celine Dionesque ballad “Won’t Let You Fall.” The latter is so generic, so cheesy, and so manipulative that just one listen will make you beg for that 10-minute loop of the intro to “Come With Me” instead.

This song is like a boiling pot full of tomato soup and old Doc Martens. It tastes and smells awful!

“Humans Being,” by Van Halen (Twister)

I don’t even know if Twister counts as a disaster movie, since there’s not much to destroy in rural Oklahoma besides a few tractors, Bill Paxton, a shed or two, and that one flying cow from the trailer, but let’s just run with it anyway. This song marks the final material Van Halen recorded prior to Sammy Hagar quitting the band.

Legend has it that after the record label heard this song, it attempted to have all copies of the master recording destroyed and the band brought to trial at The Hague, but President Clinton stepped in at the last second and cut a deal in which Hagar and the rest of Van Halen would be forced to part ways until the end of time (or at least until the reunion tour). Also, Sammy Hagar’s Cabo Wabo Cantina was Bill’s idea.4

Here’s one jam that STILL gets me right where it counts. Talk about a disaster! Did you see the grosses for this thing? The box office returns for Wild Wild West make global warming look like your sister’s beachside quinceañera!

Whose Fault Is This? Learning to Like the Mega-quakes in ‘San Andreas’ and the Sloppiness of ‘Aloha’

Lowbrow Highlights: Hook-up Theories and Concussion Drama on ‘The Bachelorette’