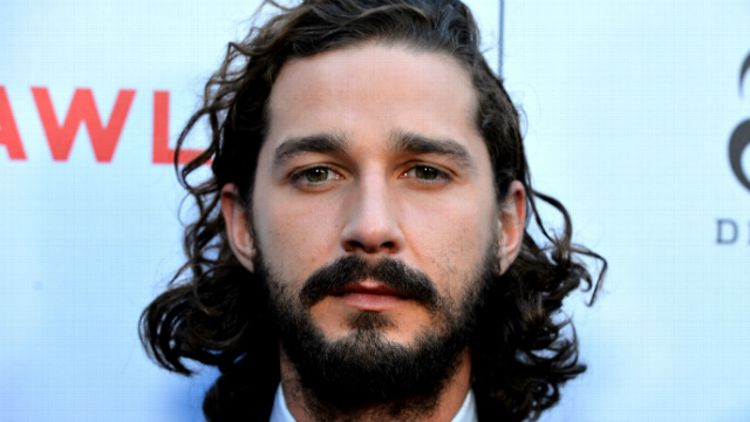 The flagrantly odd third act of Shia LaBeouf’s still-young career reached its to-date pinnacle earlier this month, when the scruffy young star made it known in no uncertain terms that, soon, he’d be having sex onscreen. Speaking about his role in Lars Von Trier’s Nymphomaniac, a telling of the sexual history of a 50-year-old woman, LaBouef said, “[The movie] is what you think it is. For instance, there’s a disclaimer at the top of the script that basically says we’re doing it for real. Everything that is illegal, we’ll shoot in blurred images. Other than that, everything is happening.”

Well, actually, according to the production company, no, it’s not: All sex scenes, a rep says, will be shot “with the help of body doubles and visual effects.”

But forget that. A trifling technicality.

Shia followed up his “real sex” revelation with a “real drug” one, offering up how, for his role in The Necessary Death of Charlie Countryman, he for real tripped balls: “There’s a way to do an acid trip like Harold & Kumar, and there’s a way to be on acid. What I know of acting, Sean Penn actually strapped up to that [electric] chair in Dead Man Walking.”

Then there’s bootlegger drama Lawless, out today, for which LaBeouf Method-boozed to the point where, he boasts, his love interest Mia Wasikowska almost quit the movie: “She was calling her attorney, like, ‘Get me the fuck out of here.’ I was really pretty aggressive about it, and not in any kind of weird, strange way, but I don’t think she had ever experienced anything like that.”

Meaning: Whatever organ is legally allowed to enter whichever orifice once the camera’s rolling on Nymphomaniac, you can rest assured Shia will find a way to get involved.

Wait. Hold up. OK, yes — everything up above is cartoonishly, cringe-inducingly over-the-top. Go ahead, doubt the technique. But let’s maybe give him the benefit of the doubt on the motivation. Early on in his life, LaBeouf was handed a lot of commercial success. And it freaked him out. For a minute there, he reacted like maybe 99 percent of us would in the same situation — he drank, he screwed around, he got in dumb bar fights. And then he settled down, and decided he wanted to try to make good movies. Now he’s really, really, really committed to making that happen. And what’s not admirable about that?

Why a sex movie, Shia? “Because [von Trier] scares me. And I’m only going to work now when I’m terrified. “Now,” as he tells it, now he’s cast off the shackles of the studio system, and huffed out into the darkness — with only his conscience, like a flickering oil lamp, to guide him — in pursuit of TRUE ART.

Lawless, a bloody dramatization of the real-life bootlegging brothers the Bondurants — said to be “invincible” by the hardworking innocents of Franklin County, Virginia — is LaBeouf’a first salvo in this self-proclaimed Serious Shit Only period. LaBeouf actually had a big part in shepherding the movie into existence, first staying with it when financing issues led the likes of Ryan Gosling and Michael Shannon to drop out, later landing Tom Hardy to headline. Lawless looks and sounds great, but it never quite rises to the fever pitch of “violent allegory of unassailable truths of will and justice” to which it aspires. That said: It is, according to my back-of-the-envelope calculations, roughly 7 billion fuckloads more entertaining than Transformers: Dark of the Moon. And Shia, playing the guileless, youngest Bondurant, might be the best thing in it.

Seeing LaBeouf get past Disney was curious, like watching the well-intentioned dweeb from down the street become, you know, a movie star. The second act, the normal-fame part, was predictably boring. Since he decided he was done with the robots, though, things have gotten good again.

First, LaBeouf started not being able to shut his mouth, ever, about anything. Over and over he crapped on Transformers, on Indiana Jones 4, and on all the other big-ticket gigs that presumably have made him financially solvent forever. His latest bit of harrumph might be his best: “There’s no room for being a visionary in the studio system. It literally cannot exist. You give Terrence Malick a movie like Transformers, and he’s fucked … [Major studios] give you the money, then get on a plane and come to the set and stick a finger up your ass and chase you around for five months.” Stick a finger! Up your ass! (Related: I could listen to him sheepishly admit to sullying the sanctity of the Megan Fox–Brian Austin Green coupling for the rest of my life.)

All that shit-talking? The way I see it, it came from a candid place. When he said “[Yo]u could put Frankie Muniz into any of the movies I’ve been in and those movies still would’ve still been No. 1,” I heard that not as the unwarranted dig at poor, middling Malcolm it became, but as an honest admonition. “Most actors on most days don’t think they’re worthy,” LaBeouf has said. “I have no idea where this insecurity comes from, but it’s a God-sized hole. If I knew, I’d fill it, and I’d be on my way.” I have done nothing of merit, young Shia was confessing, in his own histrionic fashion. But my day shall come.

For a while, though, it was all bluff. Fast-forward a bit, and suddenly LaBeouf is growing a raggedy beard, a guy-who-makes-instructional-guitar-solo-YouTube-videos ponytail, and getting naked in Sigur Ros art videos.

It’s just mind-numbingly, just jaw-droppingly pretentious — OK, now this you laugh at. But look here: LaBeouf’s putting himself out there, and he’s doing it dong-first. He’s swinging aggressively from one pole (Lawless director John Hillcoat: “He made some comment about wanting to explode if he had to do one more [CGI scene] with a green tennis ball”) to another. So he still needs to calibrate the approach. And things are gonna get a bit messy now and again. The only thing that should matter is whether his pursuit of TRUE ART equals good movies. We can give him Lawless. That’s one in the bag.

For years now, LaBeouf has talked about making a biopic of his friend Chris Palko, better known as the rapper Cage. On his way to becoming an underground hip-hop fixture, Palko, 38, suffered through a hellish childhood and adolescence. When he was 8, he was tying tourniquets for his abusive, heroin-addicted father. When he was 16, and already a veteran of LSD and mescaline and booze, he was sent to a psychiatric hospital, where he was used as a subject to test the then-new Prozac, and where he later became suicidal. Eventually, he fashioned himself into a controversial cult MC, using his own history of mental illness and drug use as fodder for his music. The plan, which is still technically in the works, is for LaBeouf to direct and star, as Cage.

In this video below, while the two kill some clay pigeons, Shia explains his fascination with Cage: “He’s that smoky figure, and we don’t have a lot of them anymore. That Jack Kerouac, Jake LaMotta type — the guy who was handed all the shittiest cards in the world and was able to play.”

Ignoring for a moment the problematic personality references, you can see what’s maybe happening here.

After his own troubled childhood — his father was an addict as well — LaBeouf lucked out, big-time, when he got cherry-picked as a Hollywood darling. But that didn’t sync with his worldview. His idols were always the ones bucking the system. His luck makes him feel guilty. So he needed to justify that good fortune. He needed to prove he’s not just another Frankie Muniz, in the right place at the right time. He was put here for a reason; he’s an artist, rebellious and true. LaBeouf wants to be that smoky figure, too.

I don’t know if he’ll ever quite get there. But he’s my dude, and he’s trying hard to make some good flicks. I wish him the best.

And now, presented without context, via the Shia LaBeouf fan page I stumbled upon while Googling him for this post: