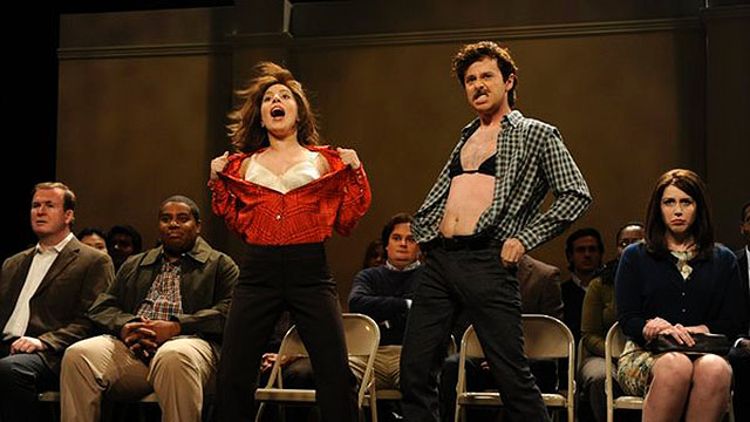 This weekend, Lady Gaga hosted SNL for the first time. She had appeared as a musical guest twice, once with Ryan Reynolds and once with Justin Timberlake, and popped up in couple of digital shorts (“3-Way (The Golden Rule)” always deserves a link), but it’s kind of surprising she hadn’t been a host before, especially during her 2008-09 promotional circuit for The Fame. Her excitement at joining the cast for a night was palpable, as though a 19-year-old Stefani Germanotta had taken over, and she approached her gig with earnest eagerness. In fact, a lot of Saturday’s material seemed tailored to Gaga-esque themes, revolving around precocious theater kids and what it means to age out of relevancy (not that Gaga’s over the hill by any means, but the way she played a septuagenarian had enough layers to reveal she’d thought a lot about it). She rolled over to allow us (and R. Kelly) to perform push-ups on her abdomen and poke fun at her image, and even when she was striving a little hard to make her eyeballs THIIIIIS BIG as a dorky Apple Genius, she committed to everything she did as a double-duty host and musical guest (and she didn’t hang on the cue cards at all, impressively).

You knew it was coming: Bobby Moynihan as Rob Ford in the cold open. This is an opportunity SNL just couldn’t pass up. In a CBC interview, Ford attempts to redeem himself after his series of cringe-worthy press conferences and photo opportunities (sometimes his “neck is missing”) with more of the same, which inevitably puts him in a worse place than he’d started (don’t negotiate a deal with your crack dealer while hiding behind a lectern unless it’s on the stage of your safe space, 60 Minutes). Morphing his face into a mayoral Grumpy Cat frown, Moynihan made this a much better sketch than I’m sure it was on paper. Could it have been pushed further? Maybe: I mean, there’s infinite material to work with. But while I could take or leave some political openers, this one I liked. “I goofed up!”

Gaga pranced onto the stage for her musical monologue in a glittery flapper dress and a blonde bob. After explaining that she appreciates applause in any form, she launched into “Cheap Applause,” which celebrates the kind of clapping that results from lines like “Give it up for New York!” She winked, she flounced, she was lifted and spun by backup dancers, and then she wandered into the audience, where she interacted with the plants from the cast. After segueing into “New York, New York,” she slipped in the line “I got my tuck just right” because she hears you when you talk smack, Internet. Gaga rarely lets you down when it comes to musical performances, but the studio audience didn’t seem to respond super-warmly to this number. Maybe that was because we all expected something shocking, but other than the tuck line this was pretty standard fare.

Man, is SNL going hard on Obamacare! The fake ad for Second Term Strength Paxil began in black and white, picturing the president (Jay Pharoah) mid-gloom before his prescription changed his mood into the glee reserved for when “you’re giving a speech at a college campus in 2008” (that Technicolor feeling!). As fake ads go, this was not my favorite, but I did enjoy “Waking Up With Kimye,” which cast Nasim Pedrad and Pharoah as the power duo. In an effort to play up Kim’s intelligence and craftiness, Kanye, wearing an infinity scarf, showcased her macaroni necklace (“She just changed the game! Food is jewelry now!”) and stylin’ Givenchy dress (she was reluctant to wear it, so Kanye slipped it on her while she was asleep). Gaga played Karen, a special guest and Apple Genius bar employee, and despite her ability to shape-shift into a minuscule nerd (so tiny!), she was acting extra hard in this scene. Obviously, Gaga relishes any chance to play an out-there character who isn’t herself, but she was working her eyeballs to the point of distraction, though I did like when she slyly commented that people who try to get attention with their wardrobe choices “are maybe hiding something.” I’m always happy to see Pharoah bust out his Kanye, and something about the league of Kardashians playing triangles and boxes of rice endeared this skit to me.

With hermaphrodite rumors and wardrobe exhibitionism out of the way, Gaga tackled the hoary “Born This Way”/”Express Yourself” issue in an impressions catch-all. Anchoring the commercial for the “Whaaat? The Worst Cover Songs of All Time” compilation CD was none other than Adam Duritz (Taran Killam), who ushered in a parade of cover artists from Britney Spears (Noël Wells, covering Leonard Cohen’s “Hallelujah” with a mess of “oh aoh”s) to Lil Wayne and Susan Boyle (Pharoah and Kate McKinnon’s stirring rendition of “We Didn’t Start the Fire”). Though accusations of Gaga’s plagiarism are a little stale, I assume this was the hardest blow for the Lady to endure, because although she never seems to take herself too seriously as a person, she’s protective of her image as an artist. Though the material didn’t push anything too far, approaching “Born This Way” as a bad Madonna cover couldn’t have been too palatable for Gaga, and her willingness to go with it seemed indicative of an overall desire to stow her ego for the night.

You may already know I am a big fan of Artpop’s “Do What U Want.” When Gaga entered for her first musical number in a pantsuit cut to her navel and an unwieldy wig, I was primed. R. Kelly stalked onto the stage like a wildcat in a white outfit that paid homage to my favorite trend, the skirts-on-pants phenomenon, and then proceeded to dance with Gaga as she grabbed her crotch and tried to make her hair behave. At one point, he handed his glasses to a lip-licking attendant, then got back to his duet in order to perform push-ups over Gaga’s body, hike her into the air, and finish the song off with a sensual hug. They shared a moment; I 'ship them now. Her second song, “Gypsy,” did not feature Kelly, but what it did have going for it were a butterfly/sprite-on-acid architectural outfit and a shirtless man in purple leggings playing the tambourine.

Two guests stopped by the Weekend Update desk: Mr. Senior (Kenan Thompson), who took to the street to halt obnoxiously premature Christmas marketing in a prerecorded bit, and Jebidiah Atkinson (Killam), a critic of The Gettysburg Address who was transported to Seth’s side from the year 1863. Mr. Senior’s field reporting was good enough, but Atkinson’s complaints about Jesus’s Sermon on the Mount (mmm, “mountaintop fish on a hot day”) and bitchy disses of Mary Todd Lincoln (“don’t even get me started on that beard”) were even better. While slamming FDR, Killam flubbed his line (“BORING ASS!”), almost broke, and then saved himself immaculately.

I think most of us can agree the clunker of the night was “Coop Board,” in which a pair of hopeful buyers face a motley crew of New York condo residents who aim to alienate them even more than sky-high HOAs would. Kyle Mooney and Aidy Bryant kick off the meeting as an elderly couple who want to hear the newbies’ sex moans through their shared walls, but the sketch never quite gets off the ground from there (though I loved McKinnon munching on her newborn, played by a head of broccoli). This seemed like an excuse to use Gaga’s excellent impression of Marisa Tomei in My Cousin Vinny, but surely there was some other way. Any other way but this.

“Spotlightz!: Acting Camp for Serious Kids” was much better. Whatever primal access Vanessa Bayer has to the portal of preadolescence is a special gift: She gets everyone from the bar mitzvah boy to the Gap-sweatshirt-wearing young drama queen. Gaga, in pigtails and braces, has a similar gift, and when she performs her PG-rated version of Training Day (“King Kong ain’t got doody on me!”), she’s clearly comfortable in the role of a middle school doofus with her eye on the prize.

One of the new developments during this rebuilding season has been video shorts with an almost melancholic tone. In memoriam to Blockbuster (may it rest in peace), a group of store employees sadly confront the death of the video chain by removing their name tags and ear gauges and taking to the streets with a cardboard cutout from The Croods for a mourning march. Luckily for them, they find a Blockbuster camp in the woods, complete with a bonfire and Lady Gaga waiting in a tent with a stash of Red Vines.

“4th Grade Talent Show” may have been Gaga’s best performance of the night, and it was also the best use of new cast member John Milhiser so far. Playing the stage parents of Ashley, a child performer we never see, the two mimic their daughter’s choreography from the audience in a routine that includes finger-licking, breast-caressing, and shirts ripped open to reveal both Milhiser’s and Gaga’s bras. There was a lot of room for error here, but Gaga didn’t miss a beat.

“Upper West Side 2063” was an interesting take on Gaga’s favorite topic, fame. Playing a kind of Norma Desmond, Gaga was a hunched-over future version of herself with an archetypal old-person afghan and smeary red lipstick. She greets Thorgon (Thompson), her building’s super, who had been summoned under the pretext of fixing a broken lamp, but was in actuality just her solo audience for piano versions of past hits and mini-monologues about the time she hatched from an egg. No bells are rung for Thorgon until he remembers “Born This Way” from a laser toilet cleaning ad (“I’m such a clean toilet/I was born this way”), but when Gaga is finally left alone with her tiny metal applause machine (come on, future! You can do better. We need glossy applause robots!), it feels like the most heartfelt self-send-up yet. Gaga has always been aware of herself, her image, the reactions to what she does, and the shelf life of celebrity. Her performances always have an element of subversiveness, as though she’s beating you to the punch. To be able to pull this off without condescension is pretty remarkable; she has incorporated every possible criticism into her persona without bitterness. That didn’t mean that “Upper West Side 2063” didn’t seem a little bittersweet (oh, shriveled Mrs. Germanotta!), but Gaga never stopped enjoying herself, which made for one of the better episodes this season.

But who could end a show on martini lamps in a fading star’s apartment shrine to herself? We were offered an after-dinner mint in the form of the RoséZone, a reality-TV highlights show that mimics the format of sports-centered RedZone. Don’t think of death and irrelevance, think instead of the prospect of hot garbage 24/7 without the filler (“no tedious recaps, no makeup lunches”). I’m baffled by why this doesn’t already exist, because how much better would Real Housewives of Beverly Hills be without all the tie-ins to the stinkingly terrible Vanderpump Rules or fork-shots from catered events? As Bryant’s character said, “Sometimes bitches just be standin’ around and thinkin’, and mama ain’t about that.”

He's Effing Out: The Excellent Eastbound & Down Series Finale