He’s Effing Out: The Excellent Eastbound & Down Series Finale 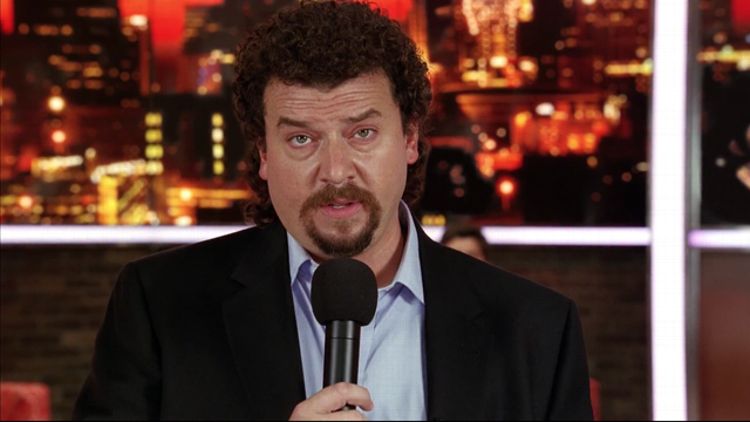 When we first met Kenny Powers, four years and 28 chapters ago, he appeared more caricature than character: a couple catchphrases, a mullet, and two proudly erect middle fingers. As with many of the projects to vaporize out of the heads of Danny McBride and his frequent collaborators, there was a distinct eau de dorm room about the whole thing. McBride hated sports and had no idea how to throw a baseball, he just liked the idea of an unreconstructed dummy getting by on velocity and bullshit. Peacocking around in Kenny’s cleats seemed like a promising way to get him and his buddies paid for giggling about their favorite things: Southern suburban malaise, herculean drug use, and cursing in front of children.

Let me be clear: I would have had no trouble with Eastbound & Down had its lone storytelling goal been to make stoners laugh until they sneezed Cheeto dust. Plenty of sitcoms aspire to much less. But the hunger for greatness burning inside Kenny Powers began as more than mere munchies in the minds of his creators. Jody Hill and fellow director pal David Gordon Green had visions of cinematic grandeur, treating each half-hour installment as a mini-movie, replete with the beats and bumps of a ’70s blockbuster. And with the goateed, hyper-verbal K.P., McBride created the perfect avatar for his louche precision. (Nobody delivers gassy nonsense with the delicacy and rigor of McBride. He’s like a Swiss whoopee cushion.) Thanks to their efforts, Eastbound crossed over from making fun of its hyper-specific milieu to having fun with it. That first season, in which a humbled Kenny, exiled from baseball, returns home to work as a substitute teacher and wrestle with the twin shackles of failure and humiliation, managed to be that rarest of flowers: something that celebrates the very thing it’s satirizing. In McBride and Hill’s hands, a lonely Jet Ski ride was imbued with pathos, not pity. It was funny because it was sad, sure, but that’s the easy part. It was also sad because it was so terrifically funny.

The subsequent seasons had their moments — particularly any moments that involved Will Ferrell’s plum-grabbing albino Ashley Schaeffer or “La Flama Blanca” on the mound — but they tended to veer into silliness and abstraction the farther they strayed from the show’s home base of Shelby, North Carolina. Kenny’s larger-than-life personality works better when it’s tethered to a highly specific existence. The stakes may have been greater in the wilds of Mexico or the neon glow of Myrtle Beach, but to me Kenny’s puffery always seemed diminished by the larger world. The show was essentially about squaring one’s past with one’s present, and the time it spent with Kenny as he chased after an impossible, fastball-throwing future was rarely as rewarding as the year he spent chasing after April Buchanon.

Thanks to a return to Shelby, this fourth and final season was a revelation. Not many shows get better as they get older; most, like Kenny rubbing up on April at Cutler’s BBQ way back when, shoot their wad early and are unable to recover. And yet, like Breaking Bad, that other great series about resentment, chemicals, and profoundly screwy father-son relationships that ended in 2013, Eastbound found a new gear as it hurtled into the homestretch. Kenny Powers the baseball player was gone, his vision of himself as a “handsome white Jesus” was fading. Married to April and the proud-ish father of two, he was, in the immortal words of Henry Hill, just another schnook living in Middle America. The brilliance of this final season was the way it took one of TV’s constant, frustrating obsessions — the suffering of the average white male — and recast it as something more interesting and self-aware. Kenny wasn’t so much raging against the dying of the light as he was furious about relinquishing the possibility of darkness. The game-day uniform may have been hung up in the closet, but all the other outward signifiers of his invented identity remained: the slicked hair, the puke-green sports car, the swimming pool, the rosin-bag-size stash of coke. Who was Kenny Powers if he wasn’t allowed to break bad? He was a wolf, not a domesticated bichon. You couldn’t keep him chained up in a tract house forever.

Last night brought the series to a close on an ecstatic, deeply satisfying high. (And Eastbound knows from the other kind of high. Just ask Jason Sudeikis’s Shane.) After trashing Christmas and watching his best friend shoot off his prosthetic chin — it’s been four long seasons of jaw-dropping grotesqueries for Steve Little; he deserves a vacation and some comprehensive therapy — Kenny finally seemed to learn that being the bigger man isn’t always the same thing as being the biggest man. He trapped Dakota and returned him to the kids. He gifted a robot to the Janowskis. All that was left to do in “Chapter 29” was to make peace with April and, more importantly, with himself. Doing so involved squaring off against the latest (and, I suppose, last) in a line of swinging-dick antagonists, though Sacha Baron Cohen’s Ronnie Thelman, a giant prick who showed us his own in the teaser, was by far the most literal. The owner of the network that broadcasts Sports Sesh, Ronnie arrives with Jerome, his “friend’s son,” in tow, with the sole purpose of transforming Kenny from star to superstar. After past successes turning Ellen into a lesbian and Ryan Seacrest straight, Ronnie gives Kenny his own show (The Powers Hour) and a mandate: Get Guy Young onto the set with the promise of forgiveness and then do the same thing to him that Jerome did to the fat guy in the blue shirt.

That Eastbound was steering itself toward a profoundly conventional ending — man learns to appreciate family — wasn’t a surprise. The unconventional path it took to get there was well worth it. Baron Cohen — drink in hand, cold sore on lip — assassinated his scenes, but, in her own way, so, too, did Katy Mixon, a lioness in a push-up bra. Kenny’s sober — well, quasi-sober; it’s not like he’s gonna say no to one of Stevie’s vikes — on-set admission of all the pooches he’s screwed was a long time coming. But Kenny’s neatest trick was the way the relative tidiness of the resolution still left room for his messy genius. The extended, invented screenplay coda was outrageous and hilarious; it felt like a game of insanity Jenga built higher than the sun. In Kenny’s perfect ending, his children grow up to be Alexander Skarsgard and Lindsay Lohan, his mullet goes gray, and April is gunned down, Martha Wayne–style, by random burglars. After bottoming out on skid row skag, he cleans up, moves to Africa, grows a long white beard, and gratefully enjoys a second act spent conversing in click dialect and sowing multiple seeds. Upon his death, Stevie and the children remove his ashes from a space crystal, with Stevie rubbing some on his gums, and toss them into the heavens.

It was a garish fantasy and it was ludicrous; it was deeply affecting and kind of perfect. In actuality, Kenny Powers’s final chapter remains unwritten. At episode’s end, he’s living with his family in Santa Fe, Kokopellis on the walls, MacBook on his desk. There’s no need for a blooper reel. The last thing we see him do, before we, the audience, go apeshit, is put down the baseball. It was touching that one of the most remarkable cultural creations of the last few years didn’t go out in a blaze of glory or a blast of hot shame. He was simply placed back on the shelf, in a better place than where we found him. Though his dreams stayed twinkling in the wide sky above the savanna, it was clear he no longer needed them to survive reality. The traditional hero’s journey traces the evolution of a man into a legend. Eastbound & Down, by contrast, told the story of a legend who eventually became a man.