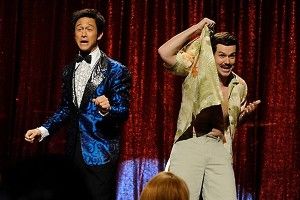 It would have been difficult to judge any host based on the sketches of this past Saturday Night Live. Opening monologue and bizarrely satisfying hypnotist segment aside, this was the kind of episode where you think, Oh, thank God, it’s “Weekend Update.” That’s not usually a good sign. But it’s also not the host’s fault: Besides the fact that Gordon-Levitt slayed it in a Magic Mike–themed opener, he also glided unself-consciously through a terrible version of the sometimes-great “guys having a beer and sharing unsettling stories and then singing the chorus of popular songs” skit and almost made the semi-weaksauce two-part “Tres Equis” scenarios fun. That is a good idea! The Son of the Most Interesting Man in the World should have been sensational! But, for some reason, the best joke was a tie between “he’s got five different styles of fedora” and the fact that he goes by Dildo Baggins when he orders his macchiatos. SNL, come on. At least match the caliber of lines like “his blood smells like cologne.”

In the interest of full disclosure, I had a crush on Mr. Gordon-Levitt in junior high school and was in close enough proximity to him on a few occasions to do things such as peek at him through venetian blinds as he passed, tell him about my pet lizard, and lie about my roles in school plays in casual conversations. This has no bearing on the fact that he was a good host, however, because now we all know that I was not a courtesan in A Funny Thing Happened on the Way to the Forum, I was in the chorus, and that I had a pet lizard, and was a creeper. Blackmail is off the table. After a stale parody of Live! With Kelly and Michael — Kelly Ripa, played by Nasim Pedrad, is small and compact! Michael Strahan (Jay Pharoah) is much larger, and doesn’t have to wear a cup for a living! And repeat! And repeat! — JGL took the stage, plugged Looper (the young Bruce Willis accent lingers), and got right to the point: His favorite superhero movie of the summer was Magic Mike, and his favorite part of Magic Mike was the stripping, fog-machine, gyrating “It’s Raining Men” part. It would have been a perfect opening monologue even if not for the fact that as the host and his backup dancers ripped off their vests, Bobby Moynihan was wearing another vest underneath. But that was a nice touch. The double-vest.

This was followed by an Undecided Voter political ad, which featured discerning undecideds posing such tough questions as “What happens if the president dies? Has anyone ever thought about who would replace him?” and “What is oil, and what is it used for?” This ad, as well as one for GOB tampons, the menstrual solution from the white sexagenarian women’s body experts in the Republican Party, were solid. It was hard not to compare them to the digital shorts of yore, though, and to fall into the Saturday Night Live oldster sofa trap that makes up past-cast nostalgia. And then came “Tres Equis” número uno: the smarmy progeny of the Dos Equis man who “can make a woman cringe just by entering the room” and whose facial-hair resemblance to Captain Morgan should maybe inspire his barfly mother to order a DNA test. Gordon-Levitt had the intense stare and rakish eyebrow down pat, but the sketch fell just short of delivering. It wasn’t worth revisiting later on, either, when Jason Sudeikis as Dad Equis showed up to get into a heavily accented argument with his son for what seemed like quite a while. The sequel took up precious real estate in a show that I was hoping desperately would feature something — anything — addressing Fiona Apple’s mug shot. You know who I bet totally gets Fiona Apple? Joseph Gordon-Levitt.

“Private Detective,” with Bill Hader as a PI whose evidence is presented as street artist caricatures and the culprit’s name, Kevin, spelled out in floating blue dolphins, wasn’t bad so much as flat. Hader and Gordon-Levitt had great chemistry and impressive matching noir sideburns, but there weren’t enough jokes to keep the segment afloat. It ended abruptly and on a weak note (“This is insanity!” “It’s not insanity, it’s Little Armenia!” — you wouldn’t want to go with Koreatown?), but at least this time the cup of pencils placed precariously on the desk didn’t go flying off into space to break the fourth wall. I am shocked that those pencils were asked back after their behavior last time. I would have assumed the union would have dropped them.

Luckily, at this point Tommy Bergamont, master hypnotist, stepped in with my favorite sketch of the night. I recognize the fact that this might have been a divisive one, because it was weird and cut from a different cloth than most recent SNL offerings. Maybe corduroy. This was also my favorite performance by Taran Killam in a while, playing a look-alike cousin of Ron Burgundy who was immune to Tommy Bergamont’s (Gordon-Levitt) spangly, glitter-outfit-emblazoned efforts to hypnotize him and silently mouthed giggly asides to the audience at the hypnotist’s expense. Despite being in control of his faculties, he screamed like a raptor and stripped down to his skivvies, crawling all over audience members to go along with his own joke and paying only with his dignity. I have immense admiration for an actor who is willing to hump someone on camera in slightly worn briefs to the extent that Killam did while rawring with his tiny dino arms flailing. Are the Emmys over? That’s too bad. Give him all the Emmys. Gordon-Levitt was smoothly hammy in this, but Killam stole the show. I saw the meteors that killed the dinosaur hurtling toward me through my television and one-half inch of off-white cotton as he mounted someone in a chair. This is a form of bravery that we cannot overlook in a viral age.

Unfortunately, this sketch did not continue for 90 minutes. We broke for Mumford & Sons’ first performance, “I Will Wait.” They were great, if that’s your thing. It is hard for a person of a certain constitution to not be distracted by imagining, while watching Mumford & Sons, a circle of folksy tweenagers at a sleepover playing an endless game of FMK with all of the members of this band. Who gets the banjoist? And what sensitive soul weeps nightly for Front Man in Vest? My ears turn into Dream Phones and it’s impossible to concentrate.

“Weekend Update” featured a mutation of “Really?!?!” called “What Are You Doing?” aimed at President Obama. The cadence of these is always enjoyable even without Amy Poehler around to administer her varsity-level withering looks. Bashar al-Assad’s two best friends from growing up, Armisen and Bayers, stopped by to whisper smack talk about their dictator buddy’s bad manners at a baby shower, but it was Kate McKinnon’s electric impersonation of Ann Romney, a Bay-on-say fan and chronic chair swiveller, who made this “Weekend Update” a great one. She had just the right amount of crazy eye in her “Countdown,” and I officially love this woman. She’s a great addition to the cast and as soon as Scarlett Johansson ends up in the news again, her impression will become an inception. Jay Pharoah also delivered on a screamy Stephen A. Smith impersonation (see: 1:11), in which his hairline was not receding, but rather running away from the loudest mouth in the world.

“Weekend Update” was followed by a bland installment of the pub singing sketch, this time to “You’ve Got to Hide Your Love Away,” set at JGL’s bachelor party. No actor can be blamed for this old pony, which trotted onstage again after so many spins on the SNL skit carousel, this time sporting a woven blanket of lamer punchlines (Bill Hader as Jerry Sandusky’s son, a vibrator’s batteries forgotten in Sudeikis’s character’s butt). Gordon-Levitt offered up a breast-juggling mime that, you know, is the badge of conviction. Because there was no way to end this drag, everyone hustled off into the audience beyond the cue cards on the final refrain. I’ve seen that before! Very recently, it seems!

“The Finer Things” was only slightly better, with Pharoah and Thompson as hosts of a hip-hop/fashion overlap talk show and JGL as their Hermès-bag-toting, fingerless-gloved guest. Again, in remembrance of SNL’s past, I yearned for something on par with “The Barry Gibbs Talk Show,” but this was not it. At least Marc Jacobs’s “sparse styles, black and white, brutal simplicity — Jacobs is back, y’all!” got a few laughs, as did Pharoah posing with the bag, in a shade that I’d argue was not “fall cappuccino” but more like a vanilla meringue, but whatever.

Mumford & Sons came back with “Below My Feet.” I tried not to hear a Brittany somewhere arguing with an invisible Emily over the blond one and succeeded long enough to decide that this was one of the better SNL musical performances I’ve seen recently. It was unself-conscious in a way that that music stage rarely allows musicians to be. I will take the keyboardist. Did I mention my pet lizard?

It appears as though the incestuous Vogelchecks have been murdered and replaced by a family that markets their teenage daughter, Evelyn (Gordon-Levitt in ’90s era dELIA*s drag), to a potential suitor with a haunting ballad while Evelyn interpretive-dances. “We present her to you,” sing Armisen and McKinnon, “with all of her flaws, we present her to you.” McKinnon and Gordon-Levitt had some moments in this weird beast, like when McKinnon sang the lyrics “she was once inside me, and now she’s outside me” or when Gordon-Levitt force-fed his date crackers and cheese, but there was really nothing to be done. Now we can only try to forget. The show concluded with Burt (Tim Robinson) and Blair (Nasim Pedrad) Powers, real estate agents whose advertisements had been defaced by phalluses (airplane-style and regular), pleading with their graffiti-artist adversaries to stop drawing dicks on their faces. Their son Carmine (Gordon-Levitt) saunters over to describe having seen an image of his mom eating a fart as his dad munches a wang sandwich, then starts defacing their promotional poster as his parents try to get to the final punchline before time runs out on the show. But it does. Which is not so bad this time.

It’s possible that the load of having a second SNL “Weekend Update” Thursday hampered this episode’s material a bit, and it looks like we’re due for a Jagger rerun this Saturday. I cannot fault the dreamy-armed host for a bad pub sing-along. Next time, on October 6, Daniel Craig hosts; James Bond doesn’t often drink beer, but when he does, he prefers to be paid a zillion dollars to do so.