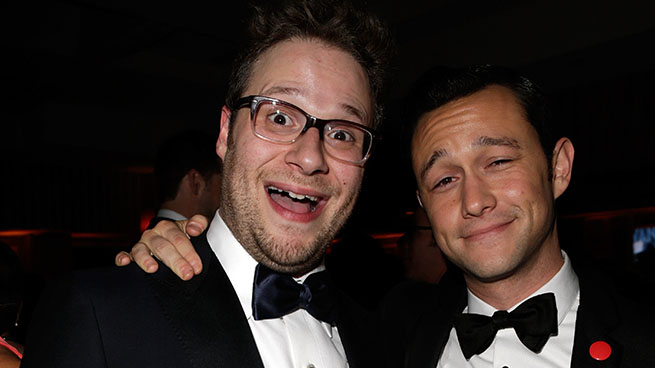 Sure, they did the 2011 cancer comedy 50/50 together, but now Rogen and JGL are officially making their buddyship a thing. They’re all set to reteam with director Jonathan Levine (Warm Bodies, The Wackness) for an untitled comedy “about three childhood friends who get together again in NYC to renew their old tradition of going out on Christmas Eve.” Cancer buddies and Christmas buddies — how nice.

You’ve heard about True Detective’s insane six-minute tracking shot from Sunday night’s episode. Here it is for your enjoyment again/for the first time. (Perhaps only temporarily.)

Hugh Jackman will host the Tonys a fourth time. His last hosting gig was in 2005.

Maggie Gyllenhaal will make her Broadway debut across Ewan McGregor in a revival of Tom Stoppard’s The Real Thing, about “a playwright (McGregor) who leaves his wife for another woman (Gyllenhaal) and questions whether life is imitating art and if their love is the real deal.” It’s also McGregor’s first time on Broadway.

These are the 15 comedians getting half-hour Comedy Central specials this year.

Rickrolled by a dessert = lickrolled. [via]

Bob Costas’s creepy red Olympics eyes? INFECTED. He’s sitting out a night while Matt Lauer pinch hits. “I’m walking around, I might as well be playing ‘Marco Polo,’” Costas says. “I have no idea where I am.”

Jimmy Fallon would like to jam with Fred Armisen’s band on Late Night With Seth Meyers.

30 Rock’s Katrina Bowden will costar with Ed Burns in Public Morals, a drama pilot at TNT.

Leonardo DiCaprio tells Variety about being considered for Moulin Rouge at one point: “To be honest, I’m not really prepared to do a musical, simply because I think I have a pretty atrocious voice. But [Baz Luhrmann and I] had a friendly thing where it was me and him and a piano player, and we tried to sing a song together. It didn’t go too well. I think it was ‘Lean on Me,’ and when I hit the high note, he just turned to me — ‘Yes, D, I don’t know if this conversation should continue.'”

And now there’s House of Cards Against Humanity.

Breaking Up Is Easy to Do, With Hollywood Movie Titles!