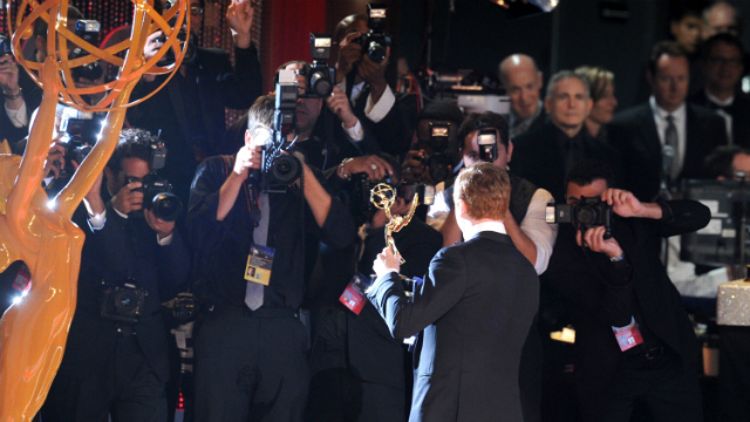 It’s a neat trick to manage to be predictable even while surprising, but that’s just what the Emmys were able to pull off last night in Los Angeles. Smooth host Jimmy Kimmel attempted to punch up the proceedings — or at least get punched — but not even the prone, non-nunchaku-bearing corpus of Tracy Morgan could trip up the parade of familiar faces and well-telegraphed upsets. But I’m not here to point fingers — that’s best done inside the comfort of a mani-cam, anyway. After last year’s a cappella–induced atrocity, the 64th Emmy Awards were a competent, serviceable affair. Cable may be ascendant, but the three-hour ceremony — on the dot! — was a tribute to old-fashioned network professionalism, eschewing innovation for slick proficiency. And the unscripted moments mostly followed suit: Jon Cryer and Julia Louis-Dreyfus had never won in their respective categories for these roles before, but their victories certainly didn’t feel fresh. The calm competence of director Tim Van Patten (Boardwalk Empire) silenced the nervy genius of Vince Gilligan (Breaking Bad). The best comic bits — Louis-Dreyfus swapping speeches with Amy Poehler, Jimmy Fallon tackling Jon Stewart, the way Kerry Washington said “David Strathairn” — felt DIY and fleeting. And when the diciest moment of a live broadcast is a puffy Tom Berenger scatting about raccoons and garden gnomes while soft jazz attempted to play him off, you’re doing something right behind the scenes, even if we’re fighting to stay awake in front of them. At one point, in a meta-twist the Emmy-less Community might appreciate, ceremony director Glenn Weiss won an Emmy while directing the Emmys. It was an appropriate symbol for a night that was all reward and very little risk.

With visions of Morena Baccarin’s sternum still dancing in my head, here are my takeaways from a very long, very punctual evening:

Mad Men entered the night with 17 overall nominations — the most of any program — and had won the previous four Best Drama statuettes. In June it completed what may have been its strongest, strangest season to date. But the moment a posh ginger bounded to the podium to accept the Bryan Cranston Memorial Award for Best Actor in a Dramatic Series — thus dooming the extremely deserving Jon Hamm to another miserable, purposeless year with nothing but his amazing looks, ferocious talent, and hilarious friends for solace — the writing was on the wall, crazy Carrie Mathison–style. Damian Lewis may not have exploded on Homeland, but his big win blew up the Emmys last night, presaging a remarkable sweep for the freshman series. (The last show to win both Lead Actor statues and Best Drama was Picket Fences back in 1993.)

Homeland — and particularly its star, Claire Danes — was a deserving victor; its first season was a remarkable achievement in melding cable brains with network brawn. Showrunner Alex Gansa, who began his partnership with co-executive producer Howard Gordon when they were seniors at Princeton in the ‘80s, was extremely gracious in sharing the “best night” of his career with his talented cast, writers, and network. (The biggest winner by far at the 64th Emmys, other than the sunlight-averse administrators of celebrity cleavage websites, was Showtime, a perpetual prestige bridesmaid suddenly transformed into a competitor-stomping bridezilla.) Even if Homeland’s Best Drama statue would make more sense with the word “new” wedged in there somewhere — going by merit alone, it’s awfully hard to argue against Mad Men or even Breaking Bad, whose rough subject matter makes it unlikely to win big but will likely never surpass its face-melting fourth season — it’s always worth celebrating when the Emmys embrace fresh blood. Still, the more interesting story here just might be why Mad Men showrunner Matthew Weiner’s Jaguar sputtered out so ruinously inches before the finish line.

Voter fatigue is just as common as viewer fatigue, of course. It’s very possible that the members of the television academy simply grew tired of rewarding the same bald man year after year and moved on to a new non-fair-haired boy. (The only drug the Emmy voters were never able to kick was John Larroquette.) But the halls of TV power are bitchier and more backstabbing than those of Sterling Cooper Draper Pryce. Weiner has ruffled quite a few creative feathers with his treatment of junior writers (most showrunners rewrite everything, but few of them put their name on nearly every episode, thus denying a full share of residuals to employees), and last year’s mammoth Mad Men contract renegotiation put other AMC creators in a worse financial pickle than the one in which Lane Pryce found himself. In public and in interviews, Weiner has defended himself quite articulately, and the quality of his series — the only metric that really matters — hasn’t suffered in the slightest. But the gossip persists. Last night, Homeland won for its brilliant narrative about a man who may not be exactly as he appears. It’s worth wondering if Mad Men lost for a similar reason.

About a third of the way through the proceedings last night, ABC (disclosure alert: the network, like Grantland, is owned by Disney) interrupted the parade of frog-marching Modern Family winners with a pre-taped comedy bit. The thrust of the video was that tiny Aubrey Anderson-Emmons, who plays Lily, actually menaces the set like the world’s cutest bully. The gag was fine but the inference redundant: Modern Family itself is already the world’s cutest bully, relentlessly hugging its more-deserving comic competition into unconsciousness. Repeat winners Eric Stonestreet and Julie Bowen are plenty worthy, but co-creator Steven Levitan’s bottomless satchel of acceptance speeches has proven to be more consistent than his show, which stumbled in its spotty third season. Heralded by both the Obama and Romney campaigns as a sign of what’s right on the small screen, Modern Family is at risk of becoming more symbol than sitcom. Consensus isn’t the same thing as excellence.

But the Family power is nothing compared to the totalitarian rule exhibited in other categories. The Amazing Race won its ninth trophy for Best Reality Competition (in 2010 it was temporarily flambéed by Top Chef) and, in the Best Variety Series category, The Daily Show with Jon Stewart took home an unprecedented 10th straight title. It’s tough to quibble with TDS’s consistency or its excellence, but it’s surprising that neither the equally consistent and excellent Stephen Colbert, nor one of the ascendant twosome of Kimmel and Fallon, have managed to interrupt Stewart’s decade-long monologue. Still, fans of the 2012-ineligible Newsroom can take solace in the fact that at least one version of fake news never goes out of favor with Emmy voters.

Although it has yet to be 100 percent confirmed, there’s a strong rumor that Julianne Moore only took the role of Sarah Palin in HBO’s Game Change to fill a gaping, gold hole on her otherwise well-decorated mantlepiece. In fact, all of the acting winners in the Drama and Movie categories last night were sure things, mainly due to their enormous success in other mediums — Dame Maggie Smith’s win was as unsuspenseful as the Dowager Countess’s dominance at the Downton rose festival, as was Jessica Lange’s — although her speech, in which she described a surprise phone call from Ryan Murphy, sounded scarier than anything the Rubber Man ever did on American Horror Story. And I’ve been joking about Kevin Costner’s inevitable podium trip since nominations were announced in July, but he still managed to set a new standard for movie star slumming, rambling about Romania and tossing off failed Olympic one-liners like residual checks from Dances With Wolves. Over the past decade, television has surpassed cinema as the dominant storytelling form of our age, but it still falls to pieces at the sight of any faded celluloid glamor. It’s telling that movies spend their awards show telling everyone how great they are. TV, the younger sibling, is still just so, so grateful you’re here!

As with the Oscars, the writing categories have become the go-to place for “makeup” awards, the shadow categories where the critically acclaimed can be recognized without pulling too much of the spotlight away from the actually popular. Last night, the hard-fought Comedy Writing category was won by Louis C.K. for “Pregnant,” the first episode of Louie’s outstanding second season. There can be no credible argument made that Louis C.K. isn’t deserving of an Emmy. But I’ll make the argument that he didn’t deserve this Emmy: Every other nominee in the category was a better-written episode of TV, from Amy Poehler and Michael Schur’s episodes of the trophy-less Parks and Recreation to Lena Dunham’s sly Girls pilot and Chris McKenna’s complicated and brilliant “Remedial Chaos Theory” installment of Community. “Pregnant,” in which Louie’s sister’s bun in the oven turns out to be flatulence, wasn’t even the best instance of giving birth to gas on the small screen this year. (I see you, Game of Thrones!) The fact that Louis won a second, more deserving trophy later (for his Live at the Beacon Theater stand-up special) proved that this category was the product of the darkest possible timeline.

5. Quality Lives Higher on the Dial

This morning my inbox was filled with two different types of crowing PR blasts. There were the ones from newer, splashier nets like Showtime (“impressive … unprecedented … historic … Patinkin”) and the ones from the old guard like CBS, bragging about the record number of trophies it earned for airing things like the Tony Awards and the Kennedy Center honors. It’s been much remarked upon how this was the first year in which there were no traditional broadcast series nominated in the Best Drama category. The larger and more salient point is that it definitely won’t be the last. Other than the occasional purple-state comedy success like Modern Family, the networks seem more and more resigned to their role as big tent content curators, the place where you can see Neil Patrick Harris sing and Bristol Palin dance, but not much more in terms of storytelling. This quality creep to the other end of the dial doesn’t stop there, though: Once-proud HBO cleaned up in the movie category with the slick, back-patting Game Change, and nabbed an acting statue for Veep’s Julia Louis-Dreyfus, but was shut out of the other major awards. The triumph of Homeland — and, to a far lesser extent, Louie — could serve as a wake-up call to arms for comfortable outlets: They’d better start taking more chances if they ever want to get back to taking home gold.

Forget Carrie and Brody, Bates and Anna, and Roger Sterling and his singing bottle of vodka: This is the only thing we’re ‘shipping now, the tear-stained lovefest between the night’s most deserving winner and its most gracious runner-up. As Jesse Pinkman sagely (and profanely) noted in the junkyard, opposites do attract.