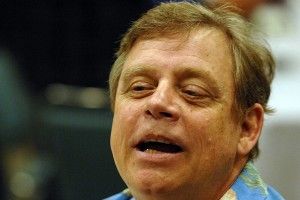 A piece of unsolicited advice for any enterprising young pop culture reporters looking to break into the game: Between now and 2015, when the first new Star Wars movie is slated to drop, set yourself up in some sort of work/live RV type thing and follow Mark Hamill around wherever he may go. Let’s just say Hamill, the ostensible star of the original trilogy, is not quite as in demand these days as some of his fellow Rebel Alliance’ers, and seems quite willing and quite able to share the minute details of his every sequel-related correspondence. A couple of years on the Hamill beat and a couple of big Star Wars scoops later, and who knows? That Paris Bureau gig might just be yours, kid.

All of which is a long-winded way of saying that Hamill (by way of promoting the DVD release of a film called Sushi Girl, of course) talked with ETOnline this week and happened to share some juicy details. The big takeaway: The powers-that-be have reached out to see if he, along with the rest of the OG cast, would be interested in at least some sort of cameo role.

They’re talking to us … George [Lucas] wanted to know whether we’d be interested. He did say that if we didn’t want to do it, they wouldn’t cast another actor in our parts — they would write us out … I can tell you right away that we haven’t signed any contracts. We’re in the stage where they want us to go in and meet with Michael Arndt, who is the writer, and Kathleen Kennedy, who is going to run Lucasfilm. Both have had meetings set that were postponed — on their end, not mine. They’re more busy than I am.

Aww, Mark Hamill, being endearingly self-deprecating about how un-busy he is! Well, now I feel terrible about that whole intro bit above. Anyway, that Kennedy wants to get Hamill and the rest of the gang involved isn’t surprising, exactly. Harrison Ford, by way of side channels, has already expressed some receptiveness to the idea, and he’s the biggest fish in the pond; if he’s down, why not everyone else, too? Plus, anyone who remembers spontaneous bursts of applause in the theaters at the first sight of R2D2 during the prequels knows that Star Wars nostalgia is the most mighty kind of nostalgia of them all, and Kathleen Kennedy would be remiss not to tap into that kind of power.

As for what Hamill will actually be doing if he shows up in the new flicks — well, your guess is as good as his. But actually, his guess is pretty good. OK so maybe his guess is, relatively, better than yours. But it’s still a guess. Definitely still a guess:

I probably learn more from Entertainment Tonight than I do directly from Lucasfilm — like for instance, when George told us he wanted to do the next trilogy, he didn’t tell us it was going to be done for Disney. He saved that little nugget, and I read it online like anybody else … I said to George that I wanted to go back to the way it was, in the sense that ours was much more carefree and lighthearted and humorous — in my opinion, anyway. And another thing I’d want to make sure of is are we going to have the whole gang back? Is Carrie and Harrison and Billy Dee and Tony Daniels, everybody that’s around from the original [returning]? I want to make sure that everybody’s on board here, rather than just one. I guess I’ll have to tune into your show to figure out who’s on board.”

I’m assuming, because I haven’t talked to the writers, that these movies would be about our offspring — like my character would be sort of in the Obi-Wan range [as] an influential character. … When I found out [while making the original trilogy] that ultimate good news/bad news joke — the good news is there’s a real attractive, hot girl in the universe; the bad news is she’s your sister — I thought, ‘Well, I’m going to wind up like Sir Alec [Guinness]. I’m going to be a lonely old hermit living out in some kind of desert igloo with a couple of robots.’

So there you have it: New Star Wars movie to prominently feature a sand igloo.

The Americans Season 1, Episode 4: 'In Control'