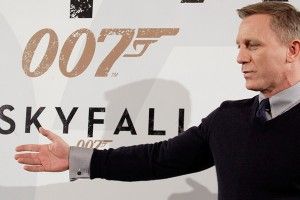 Last weekend, Skyfall had yet to open in America, and had already pulled in around $287 million. This weekend, while cruising past the $300 million mark internationally, the latest Bond flick finally dropped into Stateside theaters, where it also did large, large numbers: $87.8 million, to be exact, good for the biggest Bond opening. Ever!

As MTV reports, that makes it the fourth-biggest opening this year (behind The Avengers, The Dark Knight Rises, and The Hunger Games), and the seventh-biggest of all time. That also tops Daniel Craig’s previous Bond outing, Quantum of Solace, which pulled in $67.5 million back in 2008 (a particularly impressive number when you consider that that movie, thanks to the writers’ strike, had no script). And does that mean Skyfall now stands a chance of besting Thunderball as the biggest Bond ever, no matter what economic metrics you are using? In 1965 Thunderball pulled in $63 million, good for an inflation-adjusted sum of $500 million. Skyfall might not crack half a billy, necessarily. But it’s certainly sitting pretty so far.

When reached for comment on the good news, Daniel Craig, ever committed to his historically dour take on the character of James Bond, responded by smiling mirthlessly and silently snapping a low-ranking adversary’s neck.