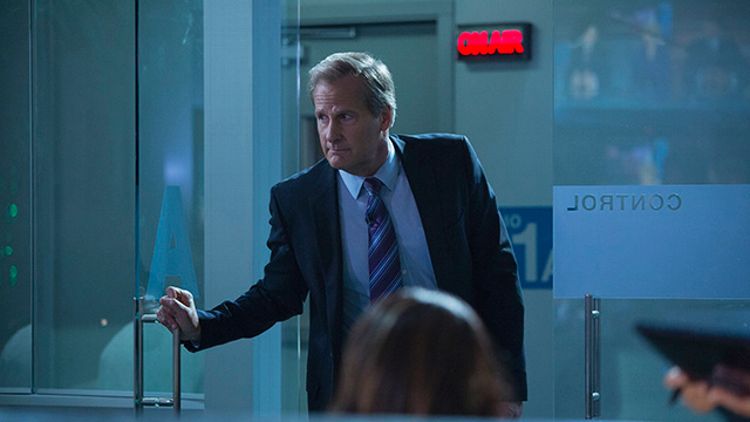 I am drowning in a sea of 'ships! It’s time to change up the format, to better bring you up to speed on where all the most important love connections stand as we head into an uncertain, possibly Newsroom-less future. But don’t think about that right now. Let’s live in the moment with our ACN buddies. Pop the champagne, light a Cuban, and and let their love open the door to your heart.

Those of you who were certain that Mac could never marry Will because of how torturous her name would be if she took his are still futzing with the parental controls on your cable so that you never have to hear the words “MacKenzie Morgan McHale McAvoy” again, and those of you who were certain Mac could never marry Will because HE IS A HORRIBLE, EMOTIONALLY ABUSIVE MAN, well … you probably stopped watching this episode as soon as you saw that flash of Tiffany blue. Only the twisted mind of Aaron Sorkin could dare to make us believe that a woman could go from barely restraining herself from delivering a righteous pummeling to her asshole ex after discovering he planted a wedding ring in his office just to fuck with her, to accepting a marriage proposal (real this time) from him 30 minutes later. (I’m on record as being overwhelmingly uninvested in this 'ship, but even I had to watch that scene from the other side of the room so as not to inflict similar damage to my television.) At no moment did Will McAvoy ever have to admit or come to terms with the fact that he had ever acted unreasonably, save for some grave faces in the dressing room that really just read as “Gosh, Mac, look what kind of bad things you’ve driven me to do.” His proposal is painted as an act of heroism because he finally found it in himself to grant Mac the forgiveness she will never deserve for making him feel small at one point in his life. And she would be a fool to turn him down, because despite every immature, petulant, nasty thing he’s said and done, he is made of truth and magic and she should be so lucky to be able to call herself his wife.

Still, there was one chance to save this situation from Vomittown, USA: How amazing would it have been if Will and Mac giddily stood before the staff and made their announcement, only to be met with icy, ominous silence and a smash-cut to the credits? There was an opportunity for a brutal Graduate-esque cap to this season, but alas, it was not meant to be. The whole office knew that Will and Mac had an emo past and would probably always be at each other’s throats until they died lonely, hateful shells of themselves, but this week we were reminded that everyone in the world of the show actually loves that dynamic and actively roots for it. I know you may want to, but please never forget that Willkenzie will always win because the whole world obsessively 'ships them.

Since most of us guessed the resolution of the riveting “silent auction book with fake German signature” plotline shortly after we began teething, we had a lot of time to think about what would be next for Slon after their inevitable moment of truth. And it turns out we had more time than Sorkin, who basically tossed them an impulsive kiss and then dropped the plot altogether. I don’t want to come off as unappreciative of this landmark moment in the most important fictional relationship on pay cable in the last three months, but c’mon, Aaron, the people demand more Slon! Even people who think the rest of your show is about as fun as listening to Neal recap a phone conversation he had with an employee of an auction house! Gosh, I sure hope you’re not holding out because this whole time Don was already taken … by his CAREER!??!

I wanna keep doing the news. Here. With Elliot, for Charlie; I wanna keep arguing with Mac and Will. I want Dantana to iron his clothes while wearing them. — Don Keefer

Hope you all drafted Passionate Don in the Don position on your Fantasy Newsroom team, because he really turned out to be Most Valuable Don (no shots at Sassy Don, obviously).

The question of whether Maggie cut her own hair became a major issue this week, I guess because Jim needed something he felt like he could fix. Jim Harper was like a benevolent self-esteem leprechaun this week, leaping about the office and dispensing reassuring words to its most broken women. He tousled Maggie’s awful hair and told her not to worry, that she was just as big and strong and tough as he was, and then she told some story about how she fell in love with him when he clicked a news alert that was, would you believe it, a mere yellow! Yellow, I say! Thankfully, this conversation and accompanying mini–clip show felt more like the last rites of their romance than a rekindling of a flame; I think even Sorkin knows at this point that there’s something kind of regressive about a Jaggie endgame, even though it seems like that’s what we’ve been building to for the past two seasons. Jim’s work here is done; Maggie is now fully aware of the eternal importance of clicking on things and maaaybe ready to put away the tribal necklaces and start growing out her hair again.

You’re working two jobs. You’re thoughtful and you’re authentic. And I have never seen you sneer at anyone or anything. There is, believe me, no one you’re not good enough for, and there’s hardly anyone good enough for you. Including, it turned out, me. — Jim Harper

A career in fashion: Don’t do it! Even if you appear to be reasonably successful in your foggily defined clothing job, you will still need to pick up night shifts as a cater-waiter to make ends meet. Also, you are probably dumb. Not so dumb that you’re not well aware of your dumbness, but definitely too dumb to have sex with known genius Jim Harper. If you’re lucky, though, he might come find you at your degrading second workplace and pull you aside to reassure you of your self-worth, which is a nice consolation prize if you can’t date the world’s second-most magical man after Will McAvoy. Just try to ignore the fact that he’s pretty much lifting the breakup spiel Sean Lowe gave to the one-armed girl on the most recent season of The Bachelor verbatim. (And I know you know what I’m referring to, because you watch The Bachelor, because you are dumb.)

Remember when Leona called Rebecca “Becca” that one time? I’m not ready to say goodbye to these two.

Whoever snuck that camera phone into the election watch party knew for sure that they were capturing ACN’s darkest days when they witnessed Charlie Skinner let a bunch of alcohol fall on the floor. Truly an embarrassment.