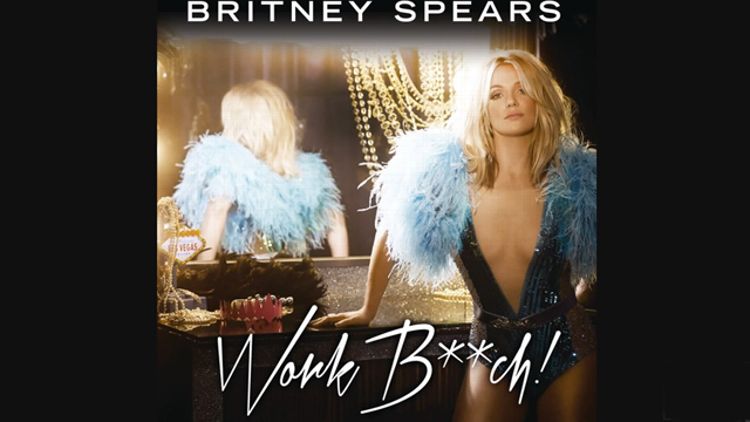 Perhaps taking a cue from Miley Cyrus channeling the Prodigy’s Keith Flint at the VMAs, the new Britney Spears single, “Work Bitch,” has Britney chanting motivational commands at you like a demented spin class instructor in a faux-British accent. It has given me the urge to hear Britney cover “Firestarter” so we can hear her yell “I’m the bitch you hated, filth infatuated” in her Limey stage voice. While “Work Bitch” pays lyrical homage to the “big beat” genre, it’s more of a standard modern EDM track than any kind of purposeful throwback. We’ll just have to keep waiting for Britney the junglist. “Work Bitch” sounds similar to current club music tracks, specifically Swedish House Mafia’s “Greyhound.” The arpeggiated acid house melody circles around Britney’s vocally frayed assurance that “You better work, bitch” if you’re trying to “party in France.”

It’s the natural extension of Brit’s work with Will.I.Am on “Scream & Shout,” which allowed her to cast off any auspices of a return to the old Britney in favor of playing to her current strengths. After a 2004 knee injury, Spears could no longer dance the way she had once been able to, and used her much-needed break from performing to get into trouble (K-Fed, rehab, Sam Lufti, the infamous head-shave/umbrella-car-smash double play) that she is still really recovering from. Despite a disastrous VMAs performance of “Gimme More” for which Spears was lambasted for being out of shape, failing to dance, and seeming generally dazed and confused, 2007’s Blackout was an artistic triumph and a high-water mark. Blackout became a fan favorite because of its darker sound and innovative beats. Will.I.Am, who is executive producing Britney’s still-untitled eighth album, was clearly paying attention. “Work Bitch” works its hard-edged beat, pervasive chorus, and airy bridge to the fullest. Britney sounds both adorable and authoritative, and a songwriting credit means she might have had some input into lines like “here comes the smasher,” pronounced in her Brit-British accent as “the smasha.”

What’s the deal with that British accent, anyway? It’s an epidemic among blonde female pop icons like Madonna and Lady Gaga. My theory is that pop stars are so concerned about sounding dumb that they overcompensate by trying to sound British, assuming a fake posh accent will lend them some kind of intellectual credibility. Nobody ever takes on a Cockney lilt, for some reason. While Madonna and Gaga clearly have some Europhilic hangups, in Britney’s case there has been a lot of speculation that British Britney is a dissociative tool. Pretending to be a character other than herself might make Britney feel more comfortable on the stage. When Britney was just being “herself,” she was pretending to be a virgin.

But wildly speculative psychological diagnoses aside, Britney’s British accent just sounds cute and funny. Despite the machinelike beat and Britney’s processed voice, there’s a lot of character in “Work Bitch.” Maybe Will.I.Am realized that letting Britney use her accent on “Scream & Shout” was the highlight of that song. Her pronunciation in “Scream & Shout” of “club” as “clob” was, dare I say, iconic? It seemed less like a mentally ill person coping through multiple identities than just a lifelong performer having a goof. “Work Bitch” is a goof, too, in the best way possible. Not every catchphrase catches on, but Britney’s repetition of “You better work bitch” is undeniable and impossible to get out of your brain afterward.

“Work Bitch” should have no trouble exploding on the speakers “in the clob,” as well as at the gym, the two environments where clob bangers are made or unmade. Spears is set to perform on GMA, when we’ll find out whether her team’s press push that Britney will be dancing again at full capacity are true. Frankly, I don’t care if she dances or just walks around onstage pointing at things like she has done in recent years — as long as she walks around and points at things with an attitude. Britney’s greatest talent is the way she brings her own exact vocal style to everything she does. It seems simple enough to follow, but is actually impossible to duplicate. That’s why lesser pop artists always fail in the presence of Britney. They’re trying too hard. She makes it look easy, even though you know it’s hard work (bitch).