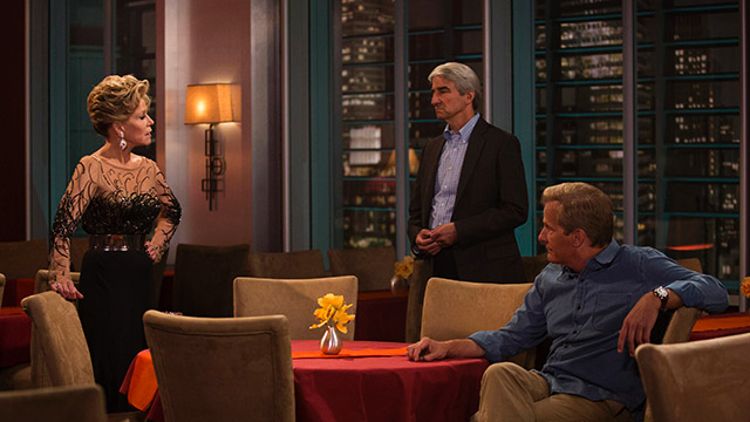 I’m gonna be honest, the better this show is, the harder it is to ‘ship report it. Oh, the pitfalls of doing a recap column with a perilously fuzzy sincerity threshold! “Red Team III” was a solid hour of workplace intrigue and a relentless documentation of the cause-and-effect that led to the firing of Jerry Dantana and all of our most beloved ACN players filing their resignations, and as such it was pretty damn suspenseful. Sure, the Sorkinese was predictably out of control, and perhaps Rebecca Halliday overdid it a little while trying to cattle-prod the Jim/Maggie/Don drama to death, but in general, there was too much work to be done to leave any time for any one of our 129 romantic subplots. Will this stop me from writing about it? I was worried that it might, until the 52-minute mark, when LEONA LANSING (missed u, gurl) stormed in with a Hail Mary of a semi-interactive monologue and saved the episode from almost certain believability. Remember how Jane Fonda is sometimes on this show? I bet you do now.

“You look like Daniel Craig, get up. Oh. You look less like him now, sit down.”  —Leona Lansing

As previously observed, this season has seen a somewhat troubling uptick in characters declaring an irrational, apropos-of-nothing dislike for things, mostly peoples’ given names. It was about time we had a character declare an irrational, apropos-of-nothing adoration of something, and Leona’s heretofore undisclosed lust for our reigning blond James Bond was the jolt of positivity we needed. It’s hard to tell how much of Leona’s fervor was fueled by the Dantana situation and how much was fueled by her Sandy-impeded attempt to give Craig a quantum of her solace, but all’s well that ends well, because it got her truth-bomb barrage off to a rollicking start.

“You will resign when I fire you out of petty malice, and not before.” —Leona Lansing

Charlie and Leona were definitely the original Will & Mac. Sometimes I remember that this isn’t a vampire show and we’ll never get flashbacks to a series of their torrid Victorian-era affairs, and that makes me sad.

“And Twiggy over here? McMac? Can I call you McMac? Doesn’t matter, I’m gonna anyway, McMac. Your head’s up your ass. Guy comes in here, into my hizzy? Guy comes in here, cooks an interview, no remorse, 30 lawyers vet the story, goes on air, you … I don’t know what you do to Sherlock Holmes this thing. I wouldn’t be able to figure it out and I’m the smartest person in the room.” —Leona Lansing

It may take you a few rewinds, but despite all accusations of cranial autokeistering, what Leona is trying to say is that Mac, like the rest of the ACN team, is misguidedly self-flagellating over something that not even someone of her intellect could have prevented, and that’s some genuinely high praise. Leona and Mac need to have a power brunch, and we need to be there to witness it. We haven’t seen Leona interact with any of the female staff, and that’s probably intentional, but now all I can think about is how much I need a brutally honest “get your life together” pep talk from Leona to Mac or Leona to Maggie, or really from Leona to any of the female staff aside from Sloan, who is going to be JUST FINE. Such a talk would be grody and didactic coming from, god forbid, Will or Charlie, but it’s about time some real tough-love solidarity [for white women lol] started forming in this hizzy. (Also, not positive, but I think Leona reads these recaps?)

Charlie: Leona, are you stoned?

Leona: You know, my makeup lasts a long time.

“Guy comes into my house, which I love — which I bet you guys didn’t know, but I love it. I love ACN. You don’t make me a nickel, and you cause headaches for the divisions that do, but you make me … you make me so proud.” —Leona Lansing

I mean, what didn’t this scene have? The take-no-shit Judge Judying toward the people she cares about, the unfettered rage at the people she doesn’t, the brief Craig-stan asides, and finally, the sincere, tear-jerking expression of faith and pride in our protagonists. Bitchy waters run deep. Of course, she’s doing what she has to, just like in any sci-fi story when warring nations must drop their conflicts in order to defeat invading aliens from D.C. But I, for one, am glad to have Leona finally in a productive relationship with the ACN team. In this dark hour they need her moxie, her experience, and her kickass courtroom outfits. Move, Becca, get out the way. This is Stoned Leona Lewis’s honorable thing.