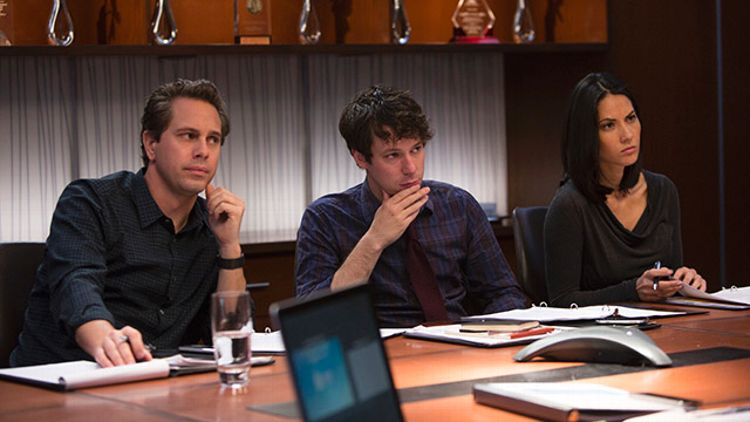 So finally we get a straight answer from Don about why he hasn’t gone after Sloan, and it is a pretty inarguable one: Sometimes, when she fills in for Eli, Don is her boss. Bless Don’s little heart for being so morally upright in this matter. I guess the only solution is for Sloan and Don to both quit ACN and move to Chicago … Oh wait, there’s another option? Some alternate way for Don to have his emotional needs met while Sloan adventurously works her way through the hulking arms of the Giants’ starting lineup? Why of course, he can’t date someone who works for him, but he can totally date someone he works for!

There’s no way I’m making up this love connection, right? We spent a long time with Mac and Don last night as they got progressively toasty and cozy, even taking their conversation from the bar to the more intimate corner couch as they spilled their hearts to one another. And not just about their love lives, either — about ethics and religion and Jerry Dantana and then:

Don: You should go out.

And then Don looks down at the melting ice at the bottom of his Black Label, and Mac falls silent, gazing at his profile and wondering if she already has.

Look, I know I’m a committed Slon-ist, and that hasn’t changed — but the beauty of this ’ship is that it doesn’t have to be in conflict with Don and Sloan’s. I’ve heard you loud and clear, Sloankenzie ’shippers, and though I haven’t had a chance to acknowledge it yet in this column, I must admit your argument is very convincing. What do you say we meet in the middle and ’ship …

Yes, Booze is already in a committed OTP relationship with Charlie, but Maggie is making an aggressive enough move that it bears some mentioning in this space. The problem with Maggie’s boozing is that she is young, yet she spends all her time with extremely wealthy, out-of-touch old people, so she takes her cues for how to drink alone from them and goes to what appears to be the quietest, most boring hotel bar in Manhattan. This is a phase for Maggie, but it’s where Charlie has made a life for himself. For Maggie, booze is just a stepping stone to get to the smokin’ beardo tourist who will teach her how to love again, or a lonely Japanese businessman who also has never before laid eyes on blonde hair, or … sigh … Jim.

I mean, if I had been dragged up to that fire hazard of a candlelit hotel room for some “discretionary time” with some guy who still can’t seem to find a comb even when I have gone to the trouble of getting myself done up in cocktail attire, and who makes a lengthy, highly unnecessary pit stop to visit his drunk ex in the bar of the hotel — to what? To just say “hi” and manufacture an awkward situation because that’s just part of his lifestyle? — I’d fake a press conference too.

“I have to do two things. I have to write a huge check to Sloan-Kettering, and then I absolutely have to break up with you. They’re both important. I get why the first one has to come first, but the second one has to come right after, no delay.” — Will McAvoy

On the one hand, after seeing poor Ms. Howard guzzle the Cabernet and try to feign interest in watching Will watch himself before draping herself over him like a regifted Snuggie, I was ready to start make 200 FREE NINA shirts on CafePress and hand them out underneath the nearest For Your Consideration HBO billboard. She was doing such an admirable job of playing Will’s validating, intellectually inferior placeholder, and it looked absolutely miserable. She not only listened to his navel-gazing, but she got invested in it and even made up some advice, which actually wouldn’t have been bad had Will not acted like an insolent child during his morning show appearance. (By the way, they would not have sprung that football thing on him without going over it with him beforehand, would they? Especially if their guest was known to be completely humorless and defensively overintellectual?)

But though Nina deserved to get out of that relationship, she didn’t deserve to be the dumpee, let alone dumped so unceremoniously. This one left a bad taste in my mouth, guys. Farewell, Nina Howard, thoroughly competent career woman and most thankless character on The Newsroom, may your media savvy and tolerance for assholes be sufficient to land you a husband someday. Now let’s just hope Will doesn’t move on from Nina fast enough to sabotage any chances of MacSlon happening.

OTP: Mac & A General Lack of Command Over Physics (Macklumsy)