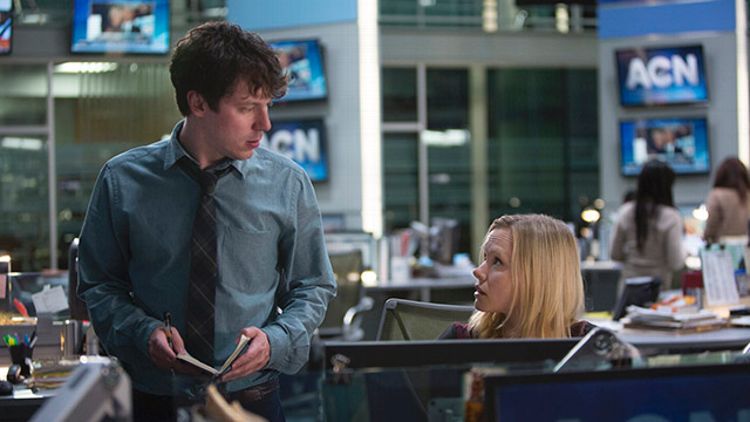 “The country is divided into people who like sex and people who are utterly creeped out by it. I’m one of the sex people.” —Maggie Jordan

I can’t even begin to imagine how much Alison Pill’s nude Twitpic scandal turned Aaron Sorkin’s world upside down, especially in the wake of Olivia Munn’s similar scenario earlier that year. Here were two women he’d deemed competent enough to play educated, nonsexual professional women, letting their hormones get the best of them and making dumb tech mistakes IRL. How would Season 2’s credibility be affected by the knowledge that these book-smart yet charmingly awkward ladies of the small screen were in fact common harlots on the smaller screen?

Or maybe none of this was in conflict with Sorkin’s view of women. Accidentally tweeting a nude selfie seems like a pretty Maggie thing to do, and don’t worry, girl, it’s normal to lose a few IQ points after a one-night stand — such are the occupational hazards of slutitude. Nevertheless, Sorkin bravely decided to face this irredeemable humiliation head-on last night, both with Sloan’s nude photo scandal and Maggie’s Sandra Fluke–inspired pro-coitus stance. Apart from the new throaty rasp in her voice, I frankly find it hard to believe that Maggie Jordan is capable of having a hard-partying phase, and the conversation she had with Jim about casual sex was too much Tell and not enough Show (not that I particularly need to be shown, but an actual sex scene on this show would at least give my brain some time to rest between monotone news ticker recitations). But that’s not Pill’s fault, it’s the fault of the writing in every episode up until this one. Oh, and what the hell is going on with her hair? So glad you asked.

Here, I’ll help you understand why Maggie’s hair is back with a simple timeline.

“You’re really … you’re impressive. I have to make a phone call.” —Don Keefer

I don’t know how many more platonic dimly lit office heart-to-hearts I can handle between these two, but it’s also nice that Don didn’t seize upon Sloan’s post-sex-pic vulnerability to make his obvious feelings known to her. Instead he listened to her story, only lightly judged her taste in men, and then aided and abetted a field trip to AIG for a righteous pantsing. All in all, a stellar week for Don.

Don doesn’t judge Sloan or get wildly jealous because at some point over Christmas she tried something kinky with an ex. He appreciates that she is a mature woman who is being disproportionately punished for something silly and utterly unrelated to her professional life. Don doesn’t have to write a column or give an impassioned speech about how pro-sluts he is. He’s already living that life every day.

OTP: Will McAvoy & His Haters (McHaters)

“It should be obvious to you by now that fundamentally small people are going to try to raise their profile by standing on your neck.” —MacKenzie McHale

Ever since Will McAvoy discovered social media in late 2011, he has fallen into a trap that is all too familiar for any of us who put ourselves out there on the Internet on a daily basis: the sweet, addictive, cruelly renewable resource that is haterade. A person’s handling of a hate binge completely varies according to the baggage they bring to it — if they are fundamentally misanthropic, the experience can be quite enjoyable, and can even reinforce one’s pessimistic beliefs both about themselves and their audience. But Will, for all his faults, is no misanthrope, and he will never cease to be surprised when someone, anyone, even the most fundamentally small Internet Girl, finds him anything less than affable. He had a complicated, abusive relationship with his father in the Midwest! Doesn’t that make anyone automatically relatable?

Will’s relationship with his haters is like a twisted funhouse mirror, and Will, like an especially deluded Narcissus, cannot tear his eyes away, too hung up on the disconnect between how he feels and how he looks. The real battle for him will not be about reforming the smugness he is so frequently accused of, but maintaining that he is a nice person stubbornly and for long enough that everyone just forgets about the concrete proof they have to the contrary and believes him.

(It should be noted that I have already declared Will & America as OTP, but this pairing is not in conflict with that one; McHaters is essentially the Charmander to Willmerica’s Charizard.)