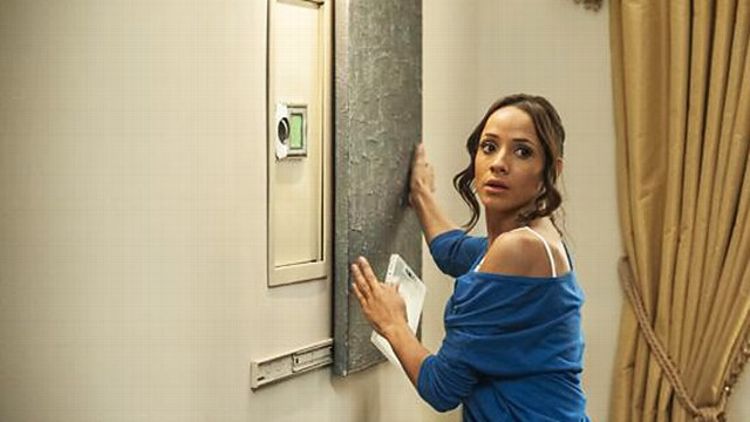 I watched a movie once called The Human Centipede 2. Have you seen it? It’s about a very disturbed, cosmically gross, wholly unlikable fellow who decides it’d be a good idea to kidnap 12 people and then sew them together, mouth to butt to mouth to butt, all the way down the line until he’s created a real, actual human centipede. I would describe it for you, but even its most tame parts are simply too explicit to discuss. Just know: It is, to be sure, the most unsettling movie I have ever seen. Also know: I would gladly trade places with any person in the centipede if it meant that Episode 8 was the last of Devious Maids. Alas, it is not. Devious Maids is the infinity of space. Devious Maids is the endlessness of the numerical integration. And watching it is the equivalent of trying to swim across the Pacific Ocean with someone’s butt sewn to your mouth. Pray that I die before next Sunday.

Marisol revealed she’s an English professor and Rosie got super mad and yelled but then was very chill, and so then Rosie started helping her figure out who killed Flora. Carmen slept with the Black Man Maid she worked with. Zoila didn’t do anything and neither did Valentina because the Rich White D she stays chasing was shipped off to rehab for his insta-cocaine addiction.

Rosie: Rosie, a maid working undercover as a different maid, watches nine sex DVDs starring Flora, the murdered maid from the first episode. While she’s doing that, the Rich White Woman she’s investigating steals the baby she’s supposed to be taking care of. So, just in case you’re keeping score: Rosie left her own baby in Mexico, and then she had another baby she was watching get shoplifted. Advanced Statistics: That’s a net minus-2 RBLs.* That’s pretty terrible. I don’t imagine she’ll be in the league too much longer with stats like that.

*An RBL is just like an RBI in baseball, except instead of batting a run in and your team scoring a point, you’re losing a baby and ruining some family.

Carmen: Carmen fully befriends the One-Legged Russian House Manager after figuring out that she has cancer. I’m almost certain a conversation similar to this happened in the pre-series writers meeting:

A: Yo, OK, since we have all the non-whites working as help and all the whites as rich, successful people, should we try and level that out somehow?
B: Hmmm. Good point. What about if we have one or two of the Latinas not be maids?
A: Come on. Don’t be ridiculous, bro.
B: My bad. You’re right. OK. How about if we make one of the maids just full-on white?
A: Now you’re just dicking with me. Nobody’s gonna buy that.
B: OK. Umm … I know: Let’s make her Russian. Close enough to white without technically being white.
A: Smart.
B: And then we just dump a bunch of bad shit on her to make the non-whites feel better.
A: Go on.
B: Like, OK, let’s give her one leg.
A: I like it, I like it. But that’s not enough. OH! LET’S GIVE HER CANCER TOO!
B: Cancer! Yes! Go ahead and start writing your Emmy acceptance speech, my brother.
A: Or rather, mi amigo. [LAUGH LAUGH LAUGH.]
B: [LAUGH LAUGH LAUGH.]
A: Oh man. Good one. I almost had to take my hood off so I could breathe.

Zoila: Zoila spends the whole episode chastising the Rich White Woman that she works for because she’s lying to the 79-year-old blind billionaire that she’s all of a sudden engaged to. Near the end, Zoila accidentally reveals the Rich White Woman’s age to the man and he gets mad and sad and is about to leave but then he remembers he’s 79 years old and that maybe not that many chicks are trying to see a 79-year-old D so he sticks around.

Valentina: Valentina accidentally talks to the Rich White Woman’s blind boyfriend and expresses an opinion and the blind boyfriend is so impressed that she’s able to speak in full sentences and stand upright and use her thumbs even though she’s a Latina that he eventually asks the Rich White Woman to tell Valentina he wants one of her eggs so he can use it to make a baby inside the womb of (I’m guessing) a good, Christian Rich White Woman and they can be a family and Valentina and Zoila can shuffle off and die in an alley. That’s a little thing called a true love story.

Bangerz vs. Prism vs. ARTPOP: A Pop-Album Battle Preview