Bangerz vs. Prism vs. ARTPOP: A Pop-Album Battle Preview 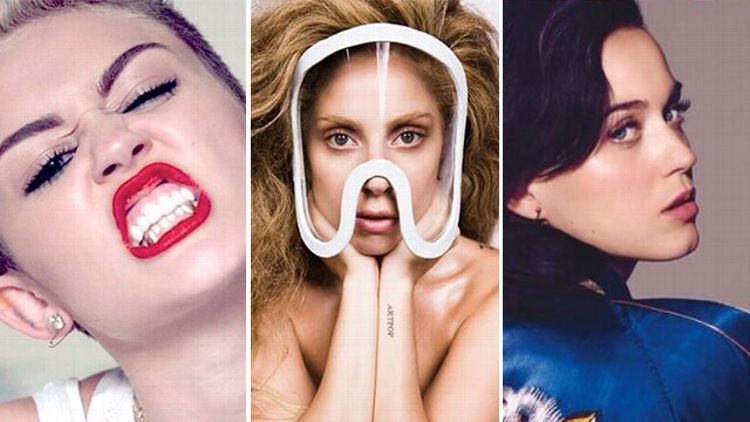 As summer winds down and school supplies start to line store shelves that once held water guns, it’s only natural to start looking toward fall. Autumn contains football, prestige films, and this year it’s also the season of huge pop albums. While big pop stars might traditionally lean toward summer hits, there’s nothing like a good fall-into-winter jam. Katy Perry, Lady Gaga, and Miley Cyrus all have albums due out in the same quarter. Perry’s Prism is set to debut in October and Lady Gaga’s ARTPOP in November. Miley Cyrus’s album Bangerz doesn’t have an official release date, but considering first single “We Can’t Stop” is finally topping international charts, it could be expected that the album will drop soonish.

Pop album rollouts are meant to be lavish, masterfully engineered spectacles, but so far there have been a few bumps in the road for all three stars. Cyrus dealt with criticism over the bathroom bumps of coke and molly-fueled dancing she not-so-slyly alludes to on “We Can’t Stop.” Her less-than-slick response was an initial denial followed by a later retraction. Despite or because of her attention-hungry antics, “We Can’t Stop” had a long, slow burn, overcoming its initially tepid reviews and twerk fatigue to become a smash.

Lady Gaga’s promo problem is that she overhypes the music on Twitter, setting up absurdly high expectations instead of just putting out the product. Her first ARTPOP single is called “Applause,” but earlier this week a long-rumored track called “Burqa” leaked. “Burqa” is also known as “Aura,” and it is mercifully not a reworking of an earlier Lady Gaga leaked demo called “Cake Like Lady Gaga (Burqa Swag),” which saw her doing an embarrassing joke rap about her wealth over a rudimentary trap beat. This “Burqa” doesn’t get to the titular garment until the very end of the song, when it serves as the peak, a last loop on the electropop roller coaster before the final drop.

Gaga uses the burqa as a metaphor for her own persona: The “veil is protection” from showing her real self. In 2009 she wore a pink hooded cape with a veil, and last year she wore a burqa-like garment made out of fur to London Fashion Week. The problem with Gaga’s controversy is that there is no message behind it other than Gaga’s desire to attract controversy. She’s not the first white pop star to get into Orientalism as a way of expressing her own narcissism; see Madonna’s whole Ray of Light era, or David Bowie and Iggy Pop’s “China Girl,” which Bowie has called satirical, despite its very stereotypical video and interpolation of the “Oriental riff.”

But it’s embarrassing that Gaga mistakes her own privileged bubble for something resembling the real world, and that she thinks wearing a pink burqa to draw attention to herself has any connection whatsoever to the issues of Islamic feminism. Gaga claims that she is appropriating the Islamic garment as a statement of liberation, and some critics have agreed with her. But her insistence that the statement can only be read one way, and never as “offensive,” smacks of the uninformed white-lady feminism that ruined the second Sex & the City movie. It’s not the first time the pop star, who brands herself as being all about acceptance, has done something that belies her complete ignorance. Nor is it the first time she’s responded to being called out with defensive claims that critics just don’t get her art.

ARTPOP’s official first single, “Applause,” comes out next week, but a seven-second snippet leaked conveniently right after Katy Perry’s “Roar” did first. Gaga has been tweeting potential “Applause” lyrics like “Pop culture was in Art now ART’s in POP culture, in me! I live for the Applause!” that make the song sound like something Lucille Austero would sing. Gaga also blasted the mixed response to her new work with a subtweet aimed at bloggers: “Dont focus on ANY blogger criticism. I have been a producer/songwriter/musician for over 10 years. Trust the artist bloggers are not critics.” It’s a little tacky, considering that bloggers are the ones who really propelled Stefani Germanotta into an empire called Lady Gaga.

Even the generally extremely well-oiled machine that is Katy Perry clocked some snags. In promotion of her new album, Perry’s team sent a gold 18-wheeler emblazoned with Prism‘s release details out on the road. The truck is making a series of stops across the country to raise Katy Perry awareness, but at a Walmart parking lot in Pennsylvania just down the way from the Whitman family whorehouse, a drunken driver in a semitruck collided with the Prism truck. Luckily, no one in either vehicle was hurt, which makes the mishap sort of funny instead of horrible. Perry released a series of Heathers-y short teaser videos for Prism‘s first single, “Roar,” that show her with doing things like torching the blue Bettie Page wig from her Teenage Dream era.

Those of us hoping that “Roar” would signal the beginning of Perry’s mall-goth phase were disappointed when the song leaked and turned out to be another “Firework”-type inspirational song, sadly lacking in minor chords. It’s my fault for getting prematurely excited about the idea of a dark wave Katy Perry album. “Roar” surfaced on the Internet two days before its official release date of August 12. Its reception was (Dr.) lukewarm. Perry had promised a whole new sound for the album, but “Roar” fits right in with her previous jawns.

A number of online commenters pointed out the similarities between “Roar” and singer-songwriter Sara Bareilles’s “Brave,” which Bareilles cowrote with Jack Antonoff from Fun. The songs do sound alike, but they also both sound like a number of other generic pop songs that are currently popular on the radio. After Perry’s promises of a darker, angrier, grungier Katy Perry, the rollout of the fairly safe-sounding “Roar” felt a little bit limp. Gaga, Katy, and Miley need to make sure their games get on point. Otherwise they’ll all be screwed when Rihanna’s eighth album drops out of nowhere in November.