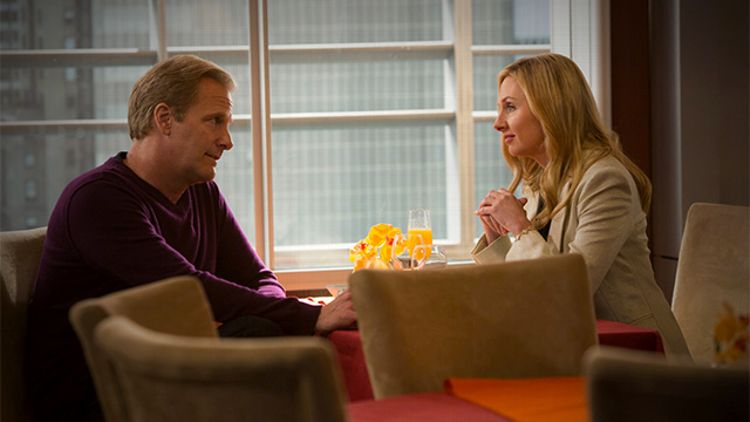 Will McAvoy: Don’t mock this.

This was one of those weeks in which Mac goes back to caring a lot about whether or not Will still loves her — and I’m not just talking about a brief, reflective furrowed brow before bedtime, I’m talking all-out, raving, maybe-switch-to-the-doxycycline mania. And this is all while she and Dantana are investigating a potential WAR CRIME! I guess if you need to get your mind off of something as stressful as all that you have to convince yourself that the distraction, i.e., your stalled love life, is up there with gassing civilians on the atrocity scale. Her sudden increased concern over Will’s voice mail (voice mail is the new SATC bus YouTube, y’all!) was not without cause, however: We all saw how her eyes lit up after Will’s tirade against the GOP debate audience. There is no greater aphrodisiac for Mackenzie McHale than some good old-fashioned hot speechifying. They can snipe and bicker whenever they want as friends and colleagues, but the times she truly misses and fears she’ll never get again were those private, intimate moments after a couple drinks when he’d take her back to his place, dim the lights, put on some smooth classic rock, and share ALL his opinions with her.

FWIW, I actively hate this ‘ship.

To paraphrase a commenter last week, in the Season 2 premiere we had Nice Guy Don, and last week we had Passionate Don. We’re still waiting for Sassy Don to return, but this week we at least got his close cousin, Neurotic Don. Neurotic Don puts tires on his chair and has way less of a filter and even gets visited by the OG office slut Falling Down. (If snark is “the idiot’s version of wit,” that make pratfalls … what? The thinking man’s jump off a 30-story building?) Consequentially, we didn’t get much in the way of Slon heart-to-hearts this week, though we did find out from Sloan’s producer “Zane” (Who? Was Charlie too busy with Phonetapgate to be the requisite cartoonishly misogynistic Sloan antagonist this week?) that Don has the ability to “put shit in her head,” so that’s something. No, the casual viewer would probably still file this ‘ship under “steady,” but the casual viewer doesn’t rewind and replay split-second moments of lightning-fast Sorkin dialogue five times to make sure their ears didn’t deceive them.

Don may have had to throw a few non-wife-beating book agents under the bus in the process, but it was worth it, because we’re now officially within a week or two of some serious Slon escalation. It’s not the tortured Slon-tana triangle I would have hoped for, but I can’t pretend I’m not very excited about this.

“Will done CIVILIZED Nina Howard,” read my notes from this episode, and that was even before she walked into Will’s Situation Breakfast Nook in a negligee for some polite, rational pants action. I’m not exactly sure how she got there, seeing as she knows that Will is still in love with Mac and she and Mac seem to have a pretty chill, cordial relationship at this point. Of course, I had forgotten to take for granted that Will is sexually irresistible and beautiful, successful women will fall over themselves for a chance to sleep with him. And that because Nina writes about celebrities instead of politicians, she is evolutionarily required to be his sure thing. This will last exactly as long as Will’s professional slump, but if I were Nina I’d start looking for rebounds in the ACN Newsroom immediately. She has to hang on to that connection; they’re going to need someone with her expertise in 2012 to break the TomKat divorce and then redeem herself with some dogged investigative reporting on Scientology that goes a little too far and eventually requires her to be airlifted by Charlie Skinner from Giovanni Ribisi’s Los Feliz compound. Look, I just wrote a fanfic about a character I don’t even care about. That’s just how crushingly boring this episode was.

I think about Jerry Dantana a lot at this point. You could call me “obsessed,” and I would cop to that. I am obsessed with Jerry Dantana. I love saying and typing the name “Jerry Dantana.” I find Jerry Dantana fascinating, I love how he always sounds like he’s talking through clenched teeth, I’m beyond frustrated that he’s the only character without a hint of a romantic subplot. I believe that Jerry Dantana goes home every night and cries himself to sleep, and I want to see that onscreen, but more than that, I want someone to comfort him. Here are my top five questions for Jerry Dantana.