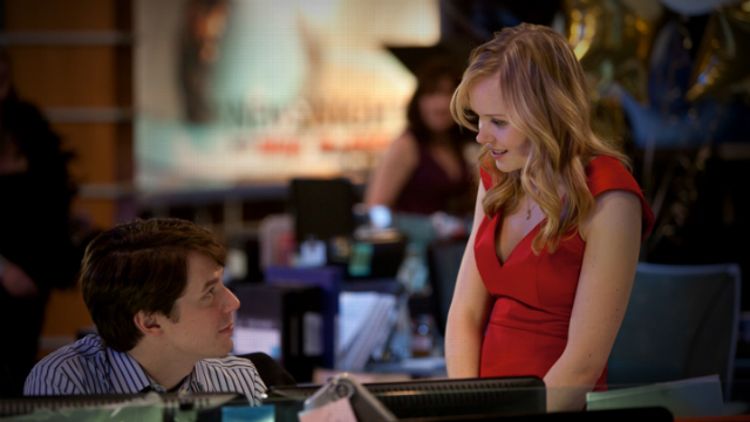 With the summer TV pickings so terribly slim this year, Hollywood Prospectus editor Emily Yoshida has had to get creative in the search for some scripted romantic intrigue until her CW shows come back. Here’s your week in ‘ships on HBO’s The Newsroom.

Mac asks Will if it’s OK for her boyfriend Wade to pitch a story to Will, because this is The Newsroom and we’re supposed to see the characters’ inability to stop thinking about current events and integrity even 10 minutes before midnight on New Year’s Eve as some kind of mark of indefatigable professionalism, and not a form of psychosis. This one has some legs, folks. Mac should know better than to leave these two alone in the cozy confines of Will’s cigarette-stale office together, especially when the champagne is flowing and the housing crisis in still in full swing.

Will: Countrywide? I don’t know what to tell you. You’ve got guys flooding the market with bad mortgages, lying to investors, making billions of dollars, but most incredibly, discussing it by e-mail. I don’t mean to insult you, but how do you not get a fraud conviction?”

Man, Wade basically walked into that office dressed in a purple muscle tee and eyeliner and asked to be truth-banged.

Hey, have you heard? Will McAvoy is on a mission to civilize, and if I remember anything about British imperialism, those always end well. “I would have more respect for you if you were a heroin dealer,” he tells Nina Howard, editor at gossip rag TMI, a.k.a. AWN’s Integrity-Free Zone. “You just missed out on a sure thing,” she counters sourly, which is exactly the kind of tacky thing an avid follower of The Real Housewives of New Jersey or, apparently, any woman who doesn’t work for Will McAvoy, would say. The once-proud bachelor and serial dater has discovered what perhaps wiser men have known for centuries: If you don’t have anything nice to say about the programming on Bravo, don’t say anything at all. (I hope by the end of this season Will makes a guest appearance on Watch What Happens Live to publicly apologize to Andy Cohen.)

Hottest speechifying: “I was the victim of an unwanted sexual advance! More importantly, I was fighting the good fight.”

Will & Carrie the Southern Liberal

It could have ended there — Will might have learned to pick his battles, especially when it comes to trying to talk some kind of female Harvey Levin into trading crotch shots for congressional hearings, but for a little bit of cheerleading from good old Charlie:

So Will continues to nail himself to his civility cross, which also means sacrificing a night in the sack with Kathryn Hahn as Sloane’s saucy single friend. After dining on $135 mac and cheese (“It’s the same as Stouffer’s macaroni and cheese with $134 of shaved truffles on top.” That McAvoy — truth teller to the end!), Will discovers a gun cozied up next to the one-hitter in her purse and proceeds to viciously firearm-slut-shame her. Don’t worry, Will was able to identify the manufacturer and model number of the gun later when rehashing the date with Sloane, and there was at least one “packing heat” joke.

Carrie: Well, if I’m walking the streets of Manhattan and a guy your size wants to rape me, then this is gonna happen. [Aims gun at Will.]
Will: Actually, statistics show that this is going to happen. [Flips gun out of her hand and aims it at her.]

I don’t necessarily disagree with you, Will, BUT SERIOUSLY WHAT STATISTICS. WHERE. (BTW, cool trick.)

Ironically, this one was a dead ringer for Dana Wilkey from The Real Housewives of Beverly Hills and I guess knowing that makes me a bitch, too.

MY WILD NIGHT WITH WILL MCAVOY: Chocolate soufflé, $135 mac and cheese, Brigadoon on LaserDisc!

So let’s get this straight: Jim knew that Don was playing him the whole time by setting him up with Maggie’s roommate, and he still invited her back to his place for some pantsless public-policy banter? Dude, you KNOW she “works in fashion” and only has about 15 minutes of stimulating conversation before she curls up for a nap and it’s just you, your laptop, and Politico for the rest of the night. I guess we already know that the only company he’s had in the bedroom for some time has been that fax machine, but still.

Lisa: “I can talk about other things. I don’t have to talk about fashion.”
Don: “What’s happening with the Greek debt crisis?”
Lisa: “There’s a huge crisis in Greece, there’s a lot of debt.”
Don: “That’s more than most people know.”

Granted, Jim was a little preoccupied this week, but you could still totally feel the chemistry between him and Mags as they gazed across the room at each other during the would-be assassination of Gabrielle Giffords. I personally don’t know how you witness something like that and don’t grab the nearest warm body for some survivalist-sex in Will McAvoy’s Soundproof Glass Office, but Maggie and Jim are Professionals.

I was really looking forward to Neal and Julian Assange going somewhere on this thing, but Neal’s wandering eye has veered off further down the Asperger’s scale and right into the warm and inviting arms of Bigfoot. Sure, there was the “unrealistically hot” non-girlfriend he brought to the NYE party, but it’s pretty clear at this point that we’re not supposed to give Neal’s human relationships more than 15 seconds of airtime per week. Sorkin just throws him someone attractive so that he doesn’t look pathetic, but he certainly won’t get any Will/Mac/Maggie/Jim/white person–grade angst. It’s OK, Neal’s clearly not ready to settle down yet, anyway. Just wait, Bigfoot. This time next week you’ll wake up bleary-eyed, only to find yourself fifth on his Google recent-search list in favor of shiny new things Casey Anthony, Rebecca Black, and turduckens.

Hottest headlineifying: “Anchor Rancor!” beats “The Face That Launched a Thousand Bottles” by a long shot.

I’m starting to think that The Newsroom is just one big spec script for Smash in disguise.