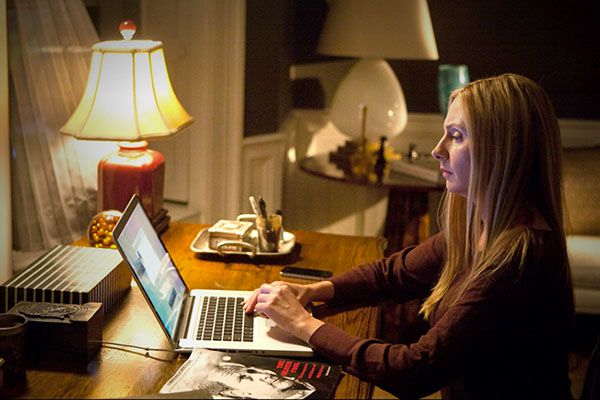 Shut. It. Down. I seriously gotta hand it to Sorkin and his “writing staff” — this ‘ship has been built up so sneakily and subtly that the the whole “I’m single because you haven’t asked me out, Don” (really, aren’t we all?) moment felt like the best kind of going-away present. Seriously, it’s like we’ve been refreshing our Google Alert for Bigfoot news only to have the Loch Ness monster swim right up to our cubicle. I’d also like to point out that Don was inexplicably swinging a knife around during a large portion of their conversation, which was like the Loch Ness Monster showing up with cupcakes. Don and Sloan are supposedly the most people-stupid in a show full of people-morons, but they’re also the most self-aware, so they might just beat Jim & Maggie to the consummation finish line. (That’s the added bonus of having months go by between episodes: It’s a lot like NBC cutting to commercial during racewalking — you can’t be mad because it’s the one sport in which we can be reasonably certain not much happened while we were away, save for a bunch of people walking around quickly and occasionally falling down. Phew, glad I could get in such a timely joke before the end of the season.)

Sloan has conveniently neglected to mention that she has a third Ph.D. in Emotional Science.

If it weren’t for all the Sloan and Baba O’Riley action this week, I would put this moment at the top of my list of Newsroom Finale Eruptions of Joy and Reasons for Living and/or Watching Television. That Sex and the City bus is real, of course (Sorry, Girls fans, you gotta DIY), which means Jim paid $48 to ride a bus full of shrieking, cosmo-swilling foreigners (Mac was strangely absent) so that he would have something to talk about with his fake girlfriend Lisa. I don’t know if that’s sweet or st— J/K, it’s stupid. Obviously Sorkin has nothing but contempt for the lies and the materialism peddled by Carrie et al., and decided to get it off his chest via a far more realistic creation, the 26-year-old who doesn’t know what LOL stands for. After watching this scene, I no longer know what irony is.

“I’m the typical single woman in New York City. I don’t wear heels to work because the typical woman’s job doesn’t exclusively involve gallery openings. And I know Carrie must’ve made boatloads writing her 800-word column for some newspaper nobody’s ever heard of, but I just spent my last seven dollars having a bite with my best friend who, by the way, is not available at 3 p.m. on a Wednesday to console me about some guy because she, too, has a job, and mostly when you fall for a guy and he’s going out with your best friend, it doesn’t work out, and things get really sad.”

… And minutes after delivering her impassioned speech railing against fake New Yorkers on TV, Maggie & Don go and re-create the Friends room-full-o’-candles proposal except for moving in together instead of marriage because everybody’s kind of ineffectual at doing relationships on this show. No Eric Clapton slow dance, either, as the music budget was clearly already blown. Thank god for Sloan; otherwise I wouldn’t have a very compelling reason to root against these two.

Let’s just get this straight: Jim goes along with Lisa’s “I forgive you, let’s get back together” thing in last week’s episode even though he had shown up at the door with the sole purpose of asking Maggie out, then tells Maggie that she should stay with Don AFTER MOUTH-KISSING HER, and by the way, this is all with full knowledge that Don has been getting all manner of ladyflowers unbeknownst to Maggie, for at least a few months? I think it’s pretty clear by now that Jim doesn’t really like Maggie that much.

Will left what we can only assume was a declaration of love on Mac’s phone while he was high on marijuana, Vicodin, and the blood of our enemies, and Mac revealed that she was not a twee hallucination from the Northwestern incident, but neither of these revelations helped move this ‘ship forward because they were too contaminated with boring non-romantic plotlines about phone-hacking and professional integrity. Plus, I don’t know that that was a good move on Mac’s part — “IT’S NOT”/”BUT IT CAN BE” is not too different from The Window Entrance: a classic romantic move originated by Shakespeare and perfected by Joey Potter that’s nice to daydream about, and that would absolutely freak you the fuck out if someone did it to you in real life.

“You’re melting, aren’t you? Your heart is full.”

I’m not sure if fan service can really exist on a show with only 10 episodes, but we had two OG Newsroom ‘ships come roaring back to life tonight, and I can’t help but think that the recitation of entire stanzas of Man of La Mancha and a running Camelot theme were Sorky’s way of showing us how much he cares. By “us,” I of course mean the fans; I’m assuming the critics can still eat a hot bag of season renewals, of which I will now be happy with no less than six, and a Broadway musical, obviously.

As Mac, Lonnie, and the doctor tried to put together the pieces of Will’s broken stomach lining, it was clear there was something missing, and as Charlie realized what it was, his eyes softened. When someone utters the name of an old flame you haven’t thought about in years, sometimes the mind has a way of only recalling the good times, the laughter, the warm nights by the fire, as if clinging to the last remaining hope that it wasn’t all for naught. Why would Will take enough Naproxen to land himself in the hospital? “To get rid of the migraine headache that comes from taking too much Effexor and bourbon at the same time,” the words poured out of Charlie and it was as if he could feel the oaky warmth in his stomach and the splitting pain in his head right then and there. And he wasn’t sure he didn’t miss it.

Brown Sugar? Ketchup? I think this was significant? I’m sorry, there was too much going on in this episode.

Nina was feeling so many things when she deleted that voice mail, 98 percent of which had nothing to do with the illicit nature of how she obtained said voice mail and everything to do with the fact that she, like Dr. Habib, realizes how important and fascinating Will and Mac’s relationship is. Welcome to the Willkenzie fan club, Nina. We are legion and we forgive everything. Join us.