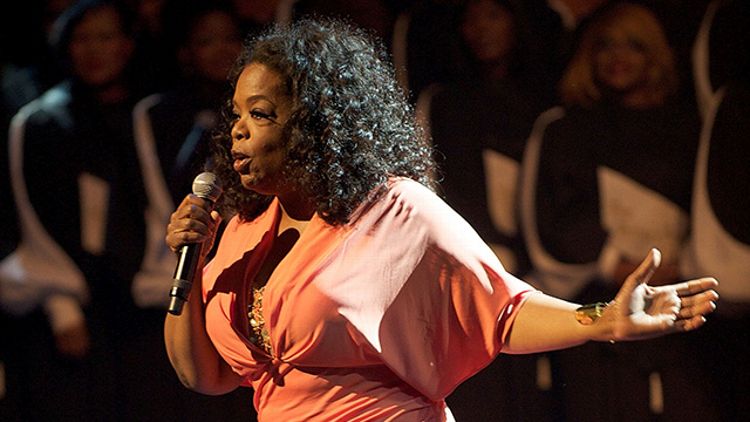 Today Forbes unleashed its list of the highest-paid celebrities. The most recent list, which charts cash monies acquired between May 2011 and May 2012, is an amazing list, mainly because it’s full of surprises. I CAN’T WAIT TO TELL YOU WHAT THEY ARE.

A joke, eight years ago:

At the time of this joke, Oprah’s net worth was already over a billion dollars, but Bill Gates’s was 46 times that amount. While Chris did make a decent point in this critique of the gap between their respective finances, you still have to give Oprah a ton of credit in the present day for continuing to find ways to make all of the money. This year was especially impressive, because she kept her top celebrity spot for the fourth straight year, even after the end of her show. As the article points out, Dr. Phil, Rachael Ray, and Dr. Oz still have to raise their hand and then give her $50,000 every time they speak directly to her, and although her ingeniously named OWN (Oprah Winfrey Network — we get it, Oprah, you own us) hasn’t exactly been a mainstream hit (that is, until Rihanna graced the channel looking like a 99-cent bodega purchase), she still found a way to net $165 million in a 12-month span. Yes, the piece notes that this could potentially be her last year atop this list, but I have chosen to not allow those words to register.

I always forget what Michael Bay’s face looks like. I seem to stumble upon a picture of him every two years, and due to that infrequency, I always go back to imagining him resembling a more refined Dog the Bounty Hunter.

This man does not look like Dog the Bounty Hunter. I have to start remembering that. Oh, and he made a cool $160 million in the 12-month span.

Where I get the money for this? Don’t think rhyming. — Cam’ron

Would you finish Detox if you made $110 million off headphones in 12 months? I know I wouldn’t. You know what I would do? I’d lift weights (just because I could), wear only black, headline Coachella, hang out with a hologram, not make Detox, and let very talented young rappers write my verses whenever I felt like being on blogs for a week. Good to know Dre feels the exact same way. Now if I could only figure out how this urban lampshades business venture is going to land me on the 2013 list. IT’S ALREADY AUGUST.

There is supposed to be only one black person in front of Tyler Perry on this list, and her name is Oprah Winfrey.” — Tyler Perry, probably

This party crash by Dr. Dre has to have Tyler upset, not only because he wasn’t invited, but because now, with $5 million more made in the 12-month span, Dre gets to sit closer at the dinner table to Oprah. It’s no surprise that T.P. is on this list, because his budgets are low, his ventures make money, and he pays actors in promised future roles, but no. 6 just isn’t cutting it. By Friday, expect seven new TBS sitcoms on the air, all complete with stale jokes, kitchen shenanigans, and monstrous laugh tracks.

5. Three of the Top Six Are Black

If this Forbes article were the first web page I’d ever been to and for some reason my Internet went out after the sixth person on the list, and then it never came back on, and then I never went to another website ever again, I’d be forced to assume that this 50-50 black-white split would ring true through the full list of 20. Right?

Well this wasn’t supposed to happen. Where’s Jay and Diddy? Will? Jaden?

No. 21: Tiger Woods. Thank you so much, Eldrick, for winning a tournament and not losing all of your sponsors. We needed this, and by “we,” I mean “Tyler hates you, too.”

Maybe this is terribly insensitive, but I thought she had lost all her TRL-era funds and was living on a shrimp boat in the Gulf. Wow, was I wrong.

9. Just When You Thought Christina Aguilera (No. Somewhere Between Adam Levine and Cee-Lo’s Cat) Was Finally Beating Britney by Being a Host on The Voice …

You click a link and find out that Britney Spears went from absent on the 2011 list to making $58 million in 12 months. And her rank is bound to climb, now that she is netting millions more to be a judge on The X Factor. Poor XTina.

10. Your Decision to Not Have Friends and Stay in on Saturday Nights Makes Dick Wolf (No. 14) Millions

$70 million between May 2011 and 2012, to be exact. Yes, the still-on-the-air Law & Order: SVU is still bringing Tricky Dick mounds of cash, but the fact that an episode from one of his many imprints is always on television, and we’re always watching at least one at a time means that Dick will never stop making all the money. The guy might be on this list forever.

Sequeltology Day 2: Why Your Favorite Movie Didn't Make It Into Sequeltology