Sequeltology Day 2: Why Your Favorite Movie Didn’t Make It Into Sequeltology 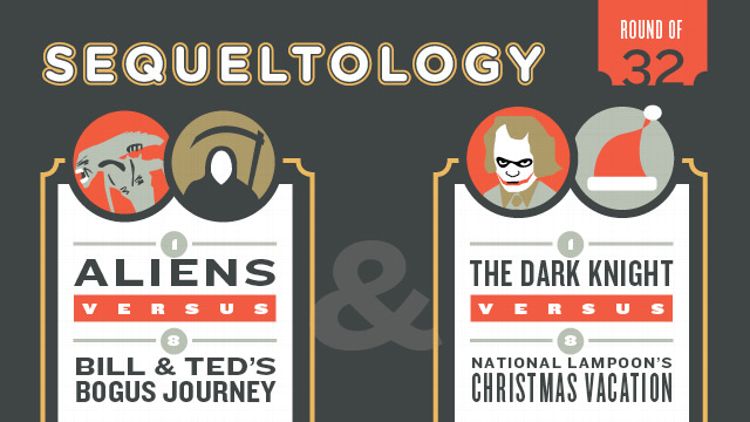 There’s a very specific, fleeting kind of glee around the Grantland offices on Bracket Day, heady moments the editors greedily drink in as we creep toward the cliff’s edge to lash our latest single-elimination tournament to a stake, waiting for the churning waters of the Internet to part as the Kraken of our readership rises up to consume its sacrificial offering. We know the feeding is coming — after all, we are the ones summoning the slumbering leviathan from the deep — but we’re always a little surprised at the violence of the ritual; within moments, Facebook and Twitter feeds are flooded with gore and the staff is swept out to grisly @-deaths in an unforgiving sea freshly chummed with our newest, dumbest ideas.

Wait a minute. Is this a bracket about movies or a faux-epic retelling of Wrath of the Titans? Did that one even have a Kraken? We bet it had, like, 10 Krakens; that’s the way sequels work, but it’s not like anyone saw it and can tell us. Anyway. Let’s just get to the trolling, shall we? 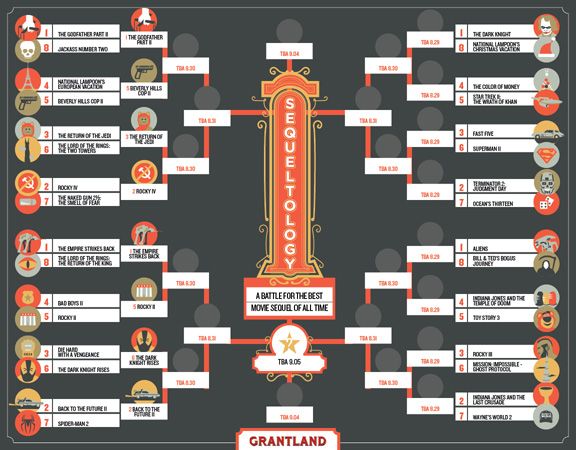 The no. 1 complaint about these things involves sins of assumed omission. How can they have forgotten about X? Haven’t these dummies ever heard of Y? Z is the best one ever! But since we did vote on pretty much all of your favorite movies (plus a lot more that aren’t on that list), the ugly fact of the matter is that we are, in fact, harboring weird vendettas against many of them. And so in a continuing spirit of openness, we’re going to shine some disinfecting sunlight upon the dark machinations of the Sequeltology Selection Committee, revealing some of the reasons we defrocked the Whoopis, disassembled the Johnny Fives, and de-schwinged the Austin Powerses you’d hoped to see better represented (or better seeded) in the round of 32.

Sister Act 2: Nothing with Whoopi Goldberg was eligible; it’s only the second-best musical nuns sequel of the early ’90s.

Lethal Weapon 2: Didn’t actually solve apartheid. Exploding toilets made us afraid to use the bathroom for a good portion of 1989. Lingering grief over Patsy Kensit’s death seems responsible for all of Mel Gibson’s problems.

Low seeds for the Lord of the Rings sequels: Simmons is deathly afraid of hobbitses; also blames powerful wizards for the Carl Crawford, Adrian Gonzalez, and John Lackey contracts.

Toy Story 2: Didn’t have the courage to kill off Buzz Lightyear when it still would have meant something.

Austin Powers 2: The Spy Who Shagged Me: Gave us Mini Me, but also later gave us Mini Me making strange noises and urinating inside our television sets.

Wayne’s World 2 only a 7-seed: During a peyote-induced vision, the Naked Indian told us that The Love Guru has retroactively devalued all of Mike Myers’s career except for the first hour of So I Married an Axe Murderer.

Short Circuit 2: Everyone had pretty shitty taste when they were 10.

D2: The Mighty Ducks: We needed to teach Rembert the harsh realities of the world, and this seemed the most cruelly effective way to do so. He hasn’t stopped sobbing and checking Expedia for flights to Iceland in over 24 hours.

Mission: Impossible II: Tom Cruise could have done a lot better on the custody arrangement; torso not nearly as weird as in Ghost Protocol.

Before Sunset: Beautiful, heartfelt, arguably superior to the original. But there’s a French person in it.

All the Harry Potters after the first one: Basically Twilight with pasty Copperfields.

Indiana Jones and the Kingdom of the Crystal Skull: JKJK, no one wanted this. Crystal LOL.