Ten Years of Facebook, and Almost Four Awkward Years of Mom Being a ‘Friend’

It was the defining moment of my near-decade on Facebook. And on this, the 10th birthday of the social networking platform, it seems appropriate to take a look back at this point in history.

Chances are that you spent years on Facebook without a chaperone. I had almost five years. And not five calm, mature years — the summer before freshman year of college through my first year as a post-collegiate “adult” in New York City.

If there was ever a time to not document every moment of your life, it’s that exact stretch. But it was done. All of it. And during that time, Facebook and I grew up together and grew on each other.

What does that even mean? We’re “friends.”

The next day, after my mother became my friend, I communicated publicly with my friend Mom, via her Wall.

But she did not get out. And while I understand that she signed up only to “get in contact with people for her high school reunion,” that event took place two years ago and she’s still on Facebook.

Because it’s a trap, one not even my beautiful, intelligent, dignified mother could avoid.

Over time, I’ve grown to appreciate her presence, as a way for her to keep up with the reputable things I’m doing. But there’s still a great deal of does-not-compute-mailer-daemon-one-divided-by-zero when considering your mother on Facebook.

For instance, my mother and I currently have 24 mutual friends on Facebook. Again, what does that even mean, the idea of us having “mutual friends”? Mutual friends are like, “Oh, you work with Tim, that’s trés cray, he was on my freshman floor, how is he?”

My mom and I don’t have any of those. Because she’s my mom. We’re “related.” We’re so related, in fact, that I’m not here without her. Yes, some of my friends for whom she’s made grits and eggs and biscuits over the years are friends with her on Facebook, and some of her high school classmates who remember me as a 3-year-old have requested my friendship, but these aren’t “mutual friends.”

But here we are. Twenty-four and counting.

We didn’t “meet.” I “happened.” Here’s the story of how I happened, however, if that’s what you’re really asking, Facebook. 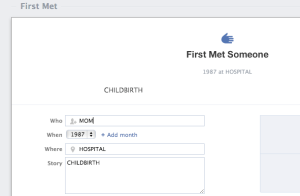 Facebook is weird. But it made it to its 10th birthday, and that’s a milestone that deserves a blue thumbs-up. And, as much as I hate to admit it, it’s made my relationship with my mother better. You have no idea how much I hate admitting it, but it’s true.

But we aren’t friends. I mean, we are friends. On Facebook. But in real life, calling my mother a— never mind.

An Imbalance of Power: The Woody Allen and Dylan Farrow Controversy