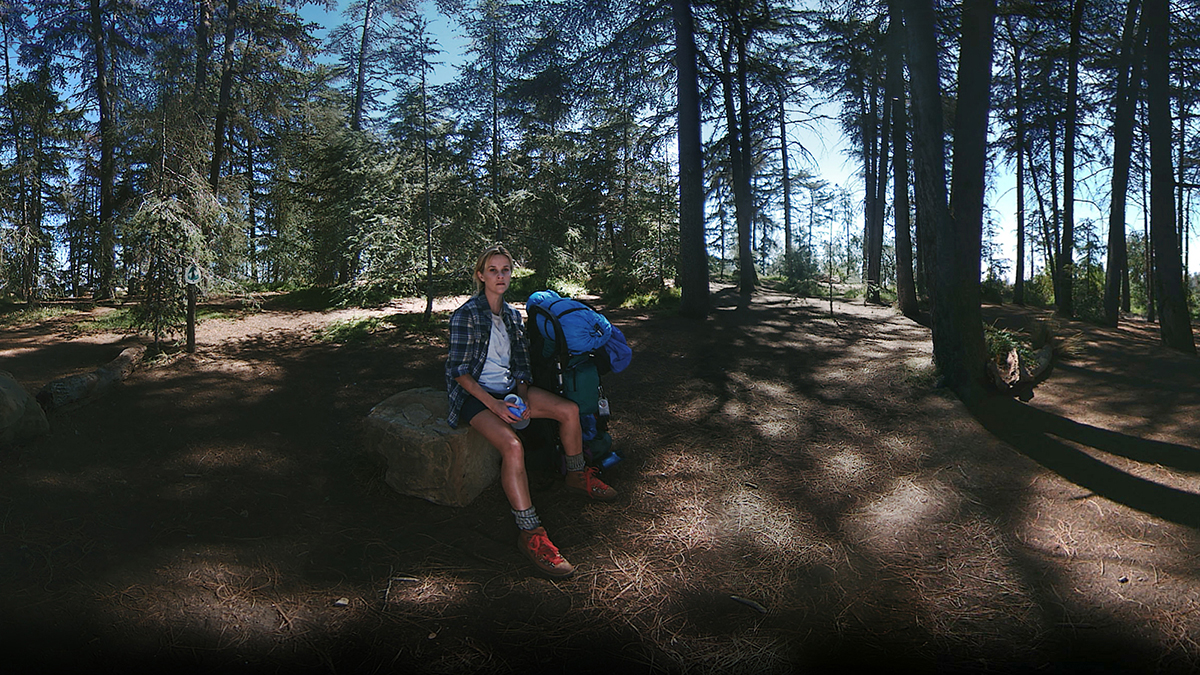 Picture this: Darkness dissolves, revealing a serene forest. You’re standing on a dirt road. A wooden sign specifies: “Pacific Crest Trail.” To your left, a log cabin. To your right, trees, trees, and more trees. Cresting over the horizon is a hiker hauling a backpack twice her size. She comes into focus. It’s Reese Witherspoon, in character as Wild author Cheryl Strayed, trekking a few more yards in her 1,100-mile solo hike. Witherspoon topples onto a nearby stump, whispers her venturing fears aloud, and summons the spirit of her recently deceased mother, appearing behind you in the form of Laura Dern. You stand between them, detached yet present, like Ebenezer Scrooge without the spiritual accompaniment. Memory tells you this is Wild, but perception goes a step further. You’re living it. You’re there. A rustling branch above distracts you long enough for the Dern mirage to disappear. This is Witherspoon’s cue to leave, strapping in and walking onward toward the dense woods. Your sight fades to black. Goggles come off. Eyes adjust to dimmer light. You’re in a loft space — the “real” world.

Filmmakers Félix Lajeunesse and Paul Raphaël caught Wild during its festival rounds last fall. The film’s nesting doll sensibility, introspection and intimate memory tucked inside the lush, Northwestern locales, set fire to their imaginations. Director Jean-Marc Vallée anchored Strayed’s story to environment. What changes when you put the audience there? Only a few months after conceiving a virtual-reality spin-off to the film, Lajeunesse and Raphaël are at the Sundance Film Festival premiering Wild — The Experience, an immersive three-minute short composed of new, 360-degree footage. The film is basic and rigid, but there are choices: If the viewer doesn’t look away from Dern as she urges Witherspoon to continue marching on, she remains onscreen, locking eyes with the camera’s POV. A participant could theoretically miss the V.R. story’s ending, its point. It’s up to the eyes in charge. Wild — The Experience is not a film, not a game, and barely something in between. Traditionalists, brace yourself: V.R. is finally ready for its cinematic close-up.

The days of ’90s retro-futuristic virtual reality — those literal “memory” cards in Strange Days, The Lawnmower Man’s educational gadgetry, and that creepy guy watching porn at work in Timecop — are both gone and present. It’s a thing of the past because today’s V.R. isn’t operating on MS-DOS. But it was prescient because, yes, we’re sticking with the helmet for now, and everything will be exploited in the virtual world. Lajeunesse and Raphaël’s Wild project is part of the “New Frontier,” a Sundance section that traditionally welcomes the year’s “experimental” films. The 2015 edition is V.R.-heavy, the rare lineup putting artists in company with recognizable brands (Fox Searchlight, VFX company Digital Domain, and Google are all involved) preparing for the gold rush.

V.R. technology has been floating around for decades, and media companies are making plays for screen space; Facebook purchased V.R. hardware company Oculus for $2 billion last March; Vice News and hotshot producer Megan Ellison’s Annapurna Pictures both signed deals with director Chris Milk to create V.R. content; Google’s V.R. product is on the market right now. Google Cardboard is exactly what it sounds like. Buy the company’s brown paper headset or build your own out of scraps, align it with the corresponding Android app and — voilà — you’re in the 3-D world.

Google previewed Cardboard at Sundance with two films: Kaiju Fury! thrusts viewers into a stark, Pacific Rim–like monster movie, with elaborate battle sequences, crumbling debris, and human characters that move around 360-degree stages. The resolution won’t eclipse your HD TV, looking more like a spiffy version of arcade-favorite Area 51. Evolution of Verse, Milk’s first collaboration with Annapurna, gives viewers the chance to live inside a screen saver, painting crisp landscapes that erupt with butterfly swarms in a dimensional dance across the sky. And remember: It’s all digested through a cardboard box and a pair of headphones.1 The future will be shinier, but no less accessible — Oculus Rift headsets displaying films still used cell phones to project their images. 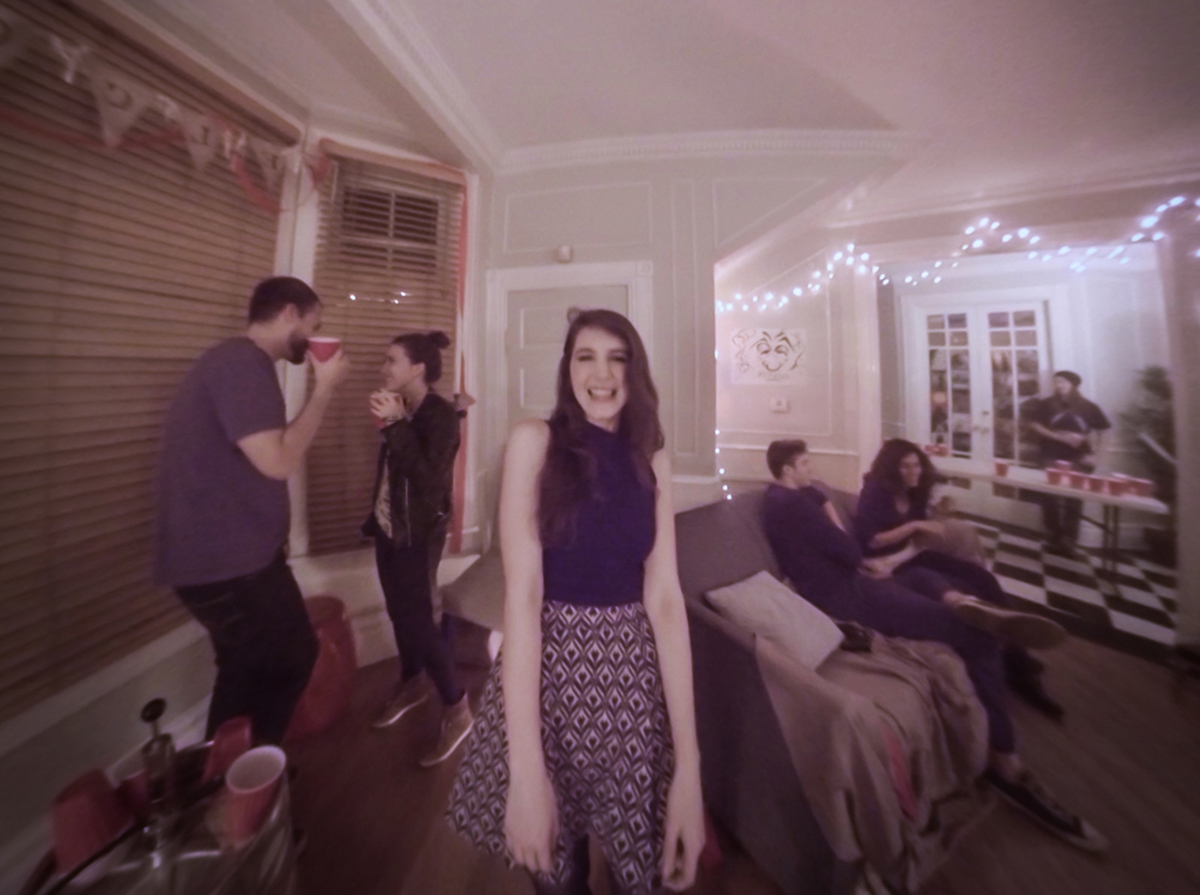 If this sounds like a World’s Fair–style gimmick parade, well, it is. But the hooky demos ended with skyscraper-size beasts. Perspective; Chapter 1: The Party is something else — it injects the tech world’s virtual-reality obsession with 100 ccs of moral weight. Designed as two back-to-back short films, the collaboration between director Rose Troche (The Safety of Objects) and special-effects veteran Morris May (The Amazing Spider-Man 2) simulates his and her perspectives during a terrifyingly casual rape case. As the male, the POV floats through a college party with red Solo cup in hand, flirting up a storm, stumbling drunk into a bedroom, and misinterpreting a nonreply from the object of his desire. The young woman entertains a similar experience, ending in a blackout. When she awakes, the boy and his buddy hover over her, antsy for confirmation, too horny to wait.

Digesting emotional information through an Oculus headset is like watching The Hobbit at 48 frames per second — the brain isn’t used to processing it this way. The fourth wall protects us. V.R. shatters it like a wrecking ball. This isn’t stopping designers from digging even deeper, where “experience” starts resembling memory, dream, or even phosphene. Oscar Raby’s Assent melds all three into an impressionistic documentary, chronicling a gruesome historical event. In 1973, the artist’s father — then a 22-year-old army officer stationed in the north of Chile — witnessed the execution of a group of prisoners captured by a military operation known as the “Caravan of Death.” An epistle illustrated with shattered Sims renders, Assent unravels history in first and second person, a thrill that jump-scare-laden found-footage movies could only dream of achieving.

In addition to Wild, Lajeunesse and Raphaël arrived with two documentary films: Herders, a fly-on-the-wall look at nomadic yak herders in Mongolia, and Strangers — A Moment With Patrick Watson, which sits you piano-side for an intimate performance from the Weezer collaborator. Simple and subdued, the duo’s exercises transport exactly as one would hope, a vacuum effect that falters only when unaccustomed users fidget with the wrong button. The inexperience won’t last long: Like the Google Cardboard demos, Lajeunesse and Raphaël’s films require only a smartphone in addition to the Oculus Rift, snapping into the viewfinder and launching with the tap of a touchscreen. There’s a not-too-distant future when new experiences arrive daily, a visceral accompaniment to the morning news. Renegade-friendly camera rigs, built from rewired GoPros (and other secret contraptions that Lajeunesse and Raphaël won’t reveal) make it easy to shoot, process, and turn around footage with little time. Vice’s interest in V.R. is all about news — imagine instead of reading about an erupting protest from afar experiencing it on the ground. There’s that empathy thing again. 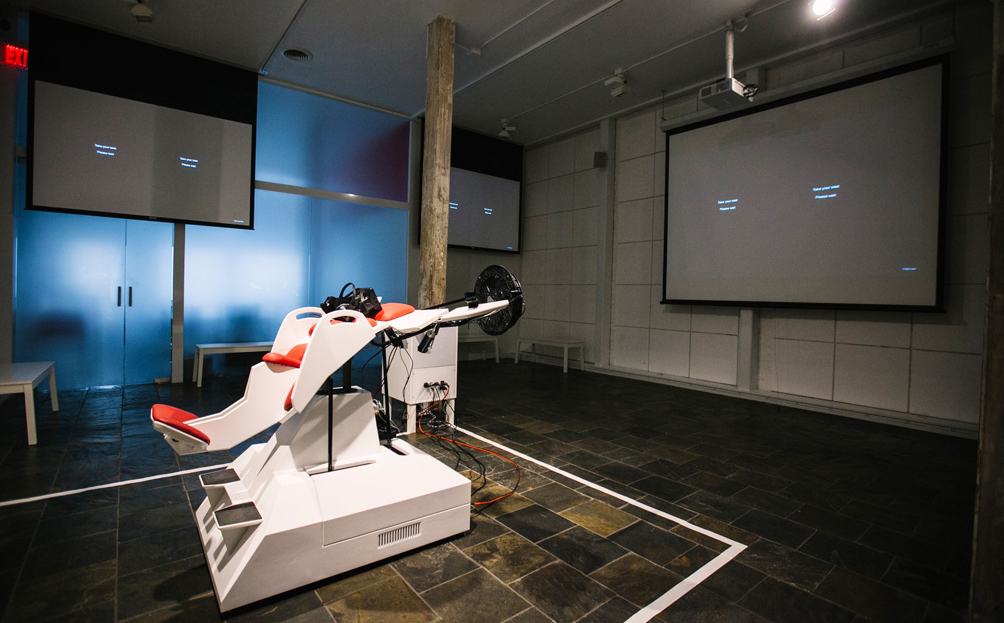 The New Frontier programming acknowledges that fluff is an essential fuel for any budding format. When Microsoft announced the HoloLens, an interactive hologram device, earlier this month, its buzziest potential use was playing Minecraft. The technology behind Sundance’s premieres is a key to V.R.’s future — yes, it can simulate dire situations, but it’ll play Candy Crush too. The crass truth is that Timecop gets something right: When porn goes virtual, there’ll be a V.R. helmet in every home.2 And there’s room for must-watch V.R. that draws audiences out of the home. The installation Birdly takes a fundamental dream concept, soaring through the sky, and extrapolates it with V.R. There’s no home model for this one. To re-create the sensation of ornithological flight, a viewer straps into a mechanical bird contraption, seen above, flapping wings and plastic feathers manipulating the in-simulation action. Not friendly on the crotch, but impossible to re-create on the phone.

Just as video enabled the ’90s Sundance generation, terraforming the indie-film landscape, New Frontier’s virtual-reality programming could be an early marker for a dominating art form. It’s hard to imagine V.R. remaining in the festival’s amorphous sidebar for much longer; with Oculus Development Kits aplenty and apps opening the V.R. star gate, a groundbreaking V.R. film could emerge and sell just as quickly as “the next Little Miss Sunshine.” Some stories demand the format. Reese Witherspoon traversing the Pacific Crest Trail amounted to awards-worthy drama. A film that could put the viewer on that same trek, soak up the elements, inhabit the character … well, picture that.

Faces of Defeat: The Screen Actors Guild Awards Through the Eyes of the Conquered