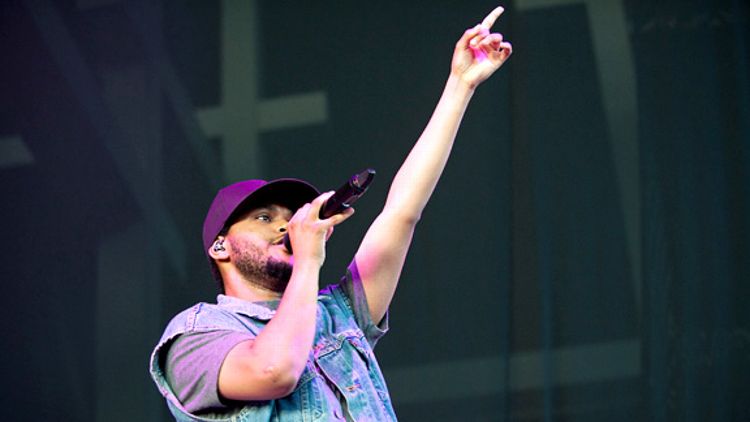 Earlier this year, the music world was batting its eyes and doing embarrassing pelvic grind moves to the music of the new darlings of R&B. Frank Ocean of Odd Future fame dropped his gem Nostalgia, Ultra in February. A few weeks later, the Weeknd (born Abel Tesfaye) made everyone peel their panties off with the first installment of his mixtape trilogy House of Balloons. Some were like, “Oooh, don’t look now, y’all, but this might be The Next Generation of R&B.” From the primordial ooze of Twitter the term PBR&B (nice one!) was coined. Some of the young traditional-minded connoisseurs of the genre were like, “I don’t know about all that hipster R&B, but it’s good music.”

But that was the spring and now it’s almost the fall, where spring things go to die. Frank Ocean shed the cocoon of Odd Future, along with the underground stigma, when he got to spread his wings with royalty. He’s currently swimming good somewhere.

On Friday, The Weeknd, continued his run of sexy music for vampires with Thursday, the second part of his mixtape trilogy. The blogs and twitter were abuzz. I listened to it over the weekend but couldn’t get you these thoughts until right now. XOXO.

Sunday: Labels, Why Again?
It’s been the case a for a while now that anyone hot is hot off that free download. “Respect first, then money — basic shit,” as Jadakiss said. Last week I swear I used to remember why labels existed. But now I think we’re getting close to only needing: Do you make music? Send me your links. Annnd Scene. That’s it. Oh, And PayPal and a secure server. The politics and bureaucracy of the label system are starting to outweigh its benefits. Ocean’s album was buried in a vault, and now after being released as a mixtape, is being reissued. Label fail. The-Dream, tired of red tape, is putting out his 1977 for free. I got $11.99 says that’s label fail (both Def Jam, btw). Lupe Fiasco started an online petition to stymie Atlantic’s label fail. Even the king of the label system, Jay-Z, said he’s done. (The best thing he could do is a mixtape right now anyways. Another S. Carter collection would hit the spot.) Artist liberation, combined with pressure from itunes and amazon, has record labels on notice. Give me your money, stay out of my way.

Monday: American Psycho Music for 2011 (or, Who Got that Urban Coke Music)
Entourage used the Weeknd’s “High for This” in a recent trailer, and of course this is the music Entourage wishes it could use for its entire half hour. Coked-out, panties to the side, we all young, hot with money in here. Let’s party like we mean it. And whoever today’s Patrick Bateman from American Psycho is, he probably listens to this urban coke music at high volume when he’s having sex, while he’s working out (which is having more sex), and definitely while he’s tweeting after killing you.

Tues: Weed, we off that
It used to be coke for the indie-rock scene and hipsters. Weed for the hip-hop and R&B set. But now it’s starting to feel a bit like, “weed, we off that”. Cocaine ain’t just for selling anymore. Earlier this summer, Kanye partner No I.D. released that free EP under the name Cocaine 80s. So if the Clipse and Rick Ross are selling, Abel Tesfaye is buying. Sometimes it feels like hip hop is just doing coke for the first time and on some awwwwww shhhh. If that’s true, weed over coke was about innocence or naivete rather than choice, and this urban coke music might be about to go out of control. The new-age cokehead R. Kelly is coming soon. Get excited, but hide your daughters.

Wednesday: Three Weeknd cover girls could fit in the ass of the average video girl
Since the days of Jay’s, “Your chances skinnier than that chick in calvin klein pants,’” I’ve wondered: friend or foe, skinny heroin-chic white girl? State your biz.

We have to see how Tesfaye’s career unfolds, but he wouldn’t be the first in this country with a heroin-chic white-girl fetish, am I right, sisters? That’s why they call it heroin-chic white-girl fetish, am I right, brothers? I do remember a time when thick video girls seemed to make the waif model look a thing of the past, or a thing confined to runways. But with the American Psycho lifestyle music and the coke, I don’t know if anything else would sustain the illusion as effectively. The angsty sophisticated wasp style almost feels like Kanye-meets-Noah Baumbach in tone. When you go with such a uniform skinny white girl look, it also has a twee element. Like Michael Cera on Viagra.

Thursday: I have devoted all my Thursdays to the Weeknd.

Friday: Mystique matters
I don’t know much about Abel Tesfaye. Pics of him are just starting to roll out. But I’m always fascinated when I don’t know much but remain intrigued. When I feel destiny pulling me like I’m Donnie Darko and find myself not resisting, it’s usually a date with disappointment. But then again, the Weeknd makes disappointment sound pretty good. At least you went out with a buzz. And he certainly allows us to project our own fantasy through his enigmatic persona, flickering Internet presence, intermittent appearances, and cryptic Twitter. it’s all shadows, fog, and falsettos. For this loud noisy culture, the cliché remains true that it’s better to be a silent fool and thought dumb than to start yapping and prove it. Call it pacing. Or being himself. Either way. Shhhh. Good job, Weeknd.

Saturday: The Album Covers … Hmmmmm
Take a look. I wonder if it’s a little too heavy on the American Apparel vibe. I’d like someone to tell me what’s up.

Previously: A Field Guide to the B-Boys You’ll See at Sunday’s Rakim and EPMD Show in Central Park
‘Otis’ Video: Kanye and Jay-Z Get Happy

YouTube Hall of Fame: Stevie Nicks Combs Her Hair, a Comedy Film From Nigeria, and the Least Sexy Video on the Internet