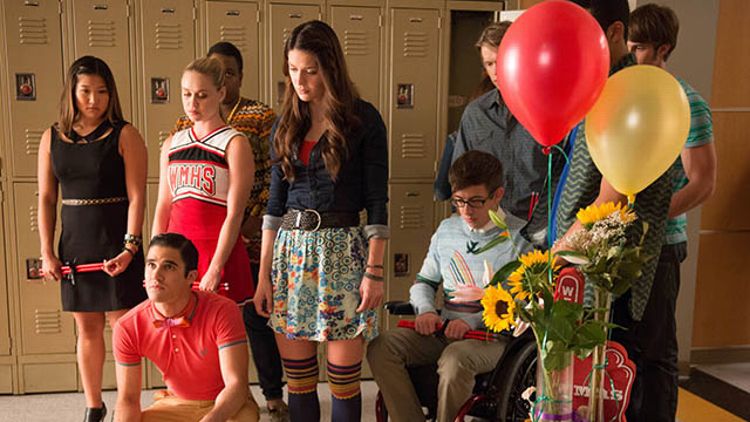 Coming off of its tear-jerking tribute episode to deceased lead actor Cory Monteith, Ryan Murphy announced this week that Glee’s next season will be its last. Its current fifth season has been a rebuilding year, shuffling out several original cast members for new faces as it moved some of its leads out of the Midwestern high school setting into a New York collegiate one. With the news that the show will end after Season 6, it seems those new characters probably shouldn’t have bothered getting too comfortable at McKinley High. It certainly feels like Glee has been on longer than five years, so dominating was its ascendance and reign. Murphy has an unparalleled knack for taking lowbrow genres nobody else has touched in years and making them into phenomenons. Murphy’s involvement in Glee started to dip around the time he began shepherding his multi-season horror miniseries American Horror Story, although his now-cancelled sitcom The New Normal probably also took some of the focus he’d once devoted to his army of Gleeks.

Maybe Murphy thought it was in poor taste to continue on with the show after Monteith’s death, but something being in poor taste has never, ever stopped Murphy from going forward with something. Possibly the preordained end dates of shows like Breaking Bad and Mad Men inspired Murphy to cut Glee off after its sixth season, but probably not. Glee seemed like it was in the process of a massive cast reboot that would have allowed it to carry on for at least a few more years, so what gives? Even if everyone from the original cast except Chris Colfer bounced, all they would have to do is make Kurt the new glee club teacher and just bring in a new class of aspiring little Patti LuPones and Mandy Patinkins to ham it up and explore issues of popularity, sexuality, race, class, and other after-school specialties.

Did Murphy decide his replacement a cappella drones simply didn’t live up to the originals? Did they run out of classic Broadway songs to cover? Or did he just get burned out on his former favorite baby, having moved on to bloodier, more Emmy-laden pastures? Who knows. The Monteith tribute episode, called “The Quarterback” after his character Finn’s position on the football team, already lacked a single appearance from Dianna Agron’s cheerleader character Quinn. The absence of Agron demonstrated what fans of Glee have had to begrudgingly accept these past couple of years: It’s not really the same show anymore. It’s nearly impossible to transition a high school show into the college years. Rather than following the divergent paths of the original cast, Glee’s split focus on the teachers back home and Rachel Berry’s Broadway dreams just muddled what had already been a very muddled and disjointed show from the start.

Or maybe Murphy just realized what anyone who has watched one episode of Glee knows: There’s only so much a capella music you can take before your ears fall off your head. Glee dominated the charts with its sugary takes on pop songs and Great White Way stalwarts alike. An insane rehearsal schedule was required to nail Glee’s mix of singing, dancing, and comedic melodrama. Coupled with a grueling offseason tour, cast members were already complaining about being burned out by the end of the first season. Sure, some of them were just hoping to take advantage of the show’s first rush of white-hot buzz to try to lay ground for their inevitable post-show film careers, but compared with a typical TV rehearsal schedule, Glee was undeniably a lot of work.

Murphy has a habit of front-loading his projects with controversy and spectacle, then getting bored with his own creations and abandoning them for the next gig. Nip/Tuck, in particular, suffered from this, running through its major plotlines at warp speed and then running out of breath toward the end. It’s a problem he has worked his way around with American Horror Story, which reboots each year as a matter of course and therefore lets Murphy indulge his briefer attention span and throw-everything-in-but-the–kitchen sink style via finite endings. But there is already trouble on the AHS horizon: The show, which reuses cast members year to year, may lose its grande dame of Grand Guignol, Jessica Lange, after Season 4. Maybe she could shuffle over to the sixth season of Glee? You could trade her for Jane Lynch’s coach Sue Sylvester, who’d fit right in with AHS’s devilish divas. And we already know Lange can sing.

Maybe Donald Glover Is Having a Harder Time Than We Realized