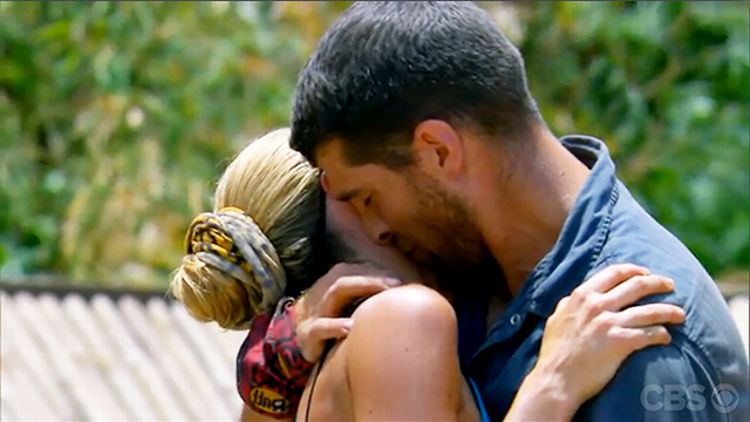 I was worried there wouldn’t be enough meat on the GRTFL bone with only Survivor in the rotation, but I was wrong. This week, Survivor gave us Zen mountaintop yoga, hellish attacking insects, and the revelation that Brad “Not Daunte” Culpepper is a lawyer. In real life.

But before we get to all of that, we need to take some time to reflect on a marriage disintegrating in front of a national audience.

Watching marriages turn into divorces is kind of what the reality-TV medium has morphed into nowadays. When you tune in to Real Housewives or Basketball Wives or Kardashian Whateverthefuck, you can’t go a season without seeing at least some cracks spreading through marital bonds. But you don’t expect to see it on Survivor.

Enter the soon-to-be-divorced-but-currently-very-good-looking doctor couple. When I first predicted that this couple was headed for divorceville after watching the first episode, it was really just an expression of my own weakness and jealousy. I mean, who doesn’t want bad things to happen to model-hot doctors? But episode after episode, something just didn’t seem right. The way they didn’t kiss when reunited on Redemption Island; the way John spoke about Candice in interviews; and, oh yeah, the way they barely spoke to each other.

Now that Candice has finally been bounced, it’s time for a retrospective. It’s time to reflect on the moments these two provided. It’s time for the GRTFL Top Five. This week’s GRTFL Top Five is the Top Five Moments When You Could Tell This Marriage Was Headed For Divorce, listed from “No big deal, I’ve done that in my relationship” to “Is there a place that is like the opposite of Vegas, where you can get quickie divorces? Because they need to go there.”

Obviously, Plan A should be for the two of you to win and send your competition home. HOWEVER, you have to have a Plan B. John and Candice had neither.

I was watching this with my wife, and when John rushed through and finished in first place, she immediately blurted, “Why didn’t he just not finish and wait to see if she was going to beat Brad?” Think about it. That’s what a couple working well together would do. Instead of winning and landing in first place, John could have held the final piece of his puzzle an inch above where it needed to go to see if Candice would beat Brad. If she managed it, all good, just drop the puzzle piece in. If she didn’t, then husband and wife could sit there and discuss who would go home. That’s how a couple should work together. But what did John do? He won as fast as he could, raised his arms in celebration, and then watched as his wife was wiped out.

2. John didn’t have Candice’s back in an argument: I covered this last week, but in short: Candice was in an argument with Brad, and John testified as a witness against her. For real.

1. The last thing that Candice said to John on the way out was: “No more tears, OK?”: NO MORE TEARS! That was her advice. Those were the words she wanted ringing in John’s head during his time on national television. Of course, he cried (20 points).

When Monica saw that Brad had been voted out of his tribe and was now on Redemption Island, she wiped her tears (5 points) and the two had the following exchange:

Brad: “Monica, you’re my rock, I adore you. You are never going to take my spot. I will battle back.”

Now, that’s a real couple. Loving each other, willing to sacrifice for each other, communicating about the game. Plus, Monica wasn’t even that worried about Brad because “He’s not just a dumb jock, he’s a lawyer too.” What? This dude is a lawyer? I don’t want a lawyer with bad tattoos. The authorities should take away your law license or whatever if you have more than three tattoos.

Speaking of things on people’s skin: This season’s blood-versus-water format twist has caused the contestants extra stress, but there can’t be anything more stressful than living with this many bug bites. I mean, LOOK AT CIERA’S BACK:

How does she not walk off the show? How does she not tear off her own flesh? If I get three mosquito bites, it’s all I can think about for the entire day. If I looked like that, I’d take a cheese grater to my entire body and attempt to live without skin. And oh yeah, the bug bites aren’t the only scary physical ailment. LOOK AT KATIE’S FEET — THEY ARE FUCKED:

“From wearing wet shoes all the time I got tinea,” Katie said. “It’s like athlete’s foot, so it burns. You get, like, little sores and it can be very painful when you walk, and it, like, gets under your toenails.” AAAAAHHHHHHHHHHH!

If you said I could have a one-in-10 chance at winning a million dollars, but that I would get tons of bug bites and tinea under my toes in the process, I would tell you to go fuck yourself. People are always scared of getting eaten in the wild, but you don’t get killed by sharks and panthers; you get killed by wet shoes, microbes, and little berries that look delicious but are actually poisonous. Now, I don’t know this from firsthand experience. As a matter of fact, I don’t know this at all; it just sounded cool when I said it to myself before I wrote it.

Candice cried (5 points) as she exited, but former junkie and current yoga instructor Vytas didn’t cry. He got Zen. When Vytas decided it was important to be in Caleb’s good graces after Caleb blindsided Brad, Vytas wasn’t exactly subtle. While he and Caleb, who is gay and engaged to former contestant Colton, were out on the water in a boat, Vytas said: “It’s crazy how my skin is reacting out here, like the little rashes I’m getting. I need a lot of exfoliating. Your skin looks great.” It was like Vytas went into his “gay people” mental manila folder and the only thing he found was a piece of paper with the words “compliment” and “exfoliating” on it.

After his boat bonding, Vytas headed back to land for some me time:

I think I’ve seen a stripper do this before:

I’ve definitely seen a stripper do this before:

Peaceful yoga scenes like this might make you think that being on Survivor isn’t that bad. Don’t forget the bugs, man. There’s no sunrise or sunset beautiful enough to make me endure bug bites like that. None.

Check back next week for more Survivor, plus a couple other shows. As I write this sentence, I’m half-watching Preachers of L.A. Enjoy your weekend.