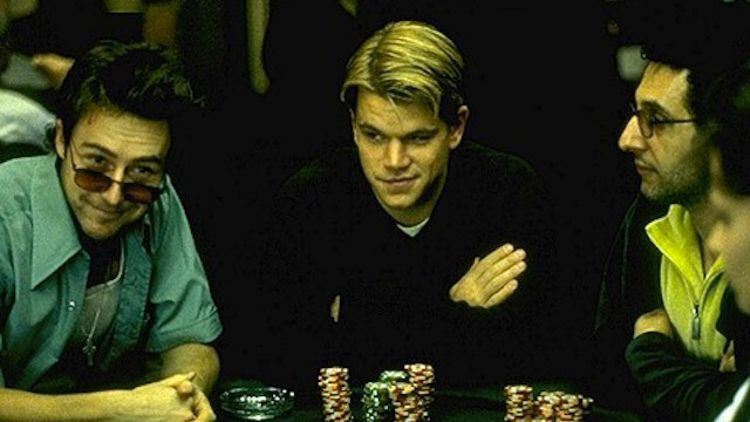 When queried about the Friday Night Lights movie recently, Tim Riggins himself put the hammer down: “I’ll just say no. [Slams fist on table.] No, period. I’m not doing it. I’m never gonna be in that movie. There was already a movie! And the show ended fuckin’ spot-on. We’re good.” And, like — right? For as much as we pine for sequels/revivals/movie adaptations of beloved TV shows, the truth is, we know not what we ask for. Generally, really, why muck about with something that was spot-on? Slams fist. We’re good.

The exception? When the original has been left perfectly open-ended for a sequel, the amount of time that has elapsed since the original means a sequel now only makes more sense, and the writers of the original have been kicking around a sequel idea for years. To finally get to the point here: Rounders 2 looks like a go, and you’re goddamn right that’s something you should be excited for.

That it might happen now, 15 years after the first go-around, is an offshoot of some larger industry doings. As you might recall, in 2010, Disney sold off Miramax, for $663 million, to the investment firm Colony Capital. At the time, Colony had just established a new entertainment fund, which was the idea of the company’s CEO, Tom Barrack — and his good buddy, Rob Lowe. Also of note: The purchase of Miramax was largely backed by the sovereign wealth fund of the government of the tiny, oil-rich Arabian Peninsula country of Qatar.

Apparently, Harvey and Bob Weinstein — who’d founded the company in 1979 (naming it after their parents, Miriam and Max), built it into an indie powerhouse, sold it to Disney in 1993, and left it in 2005 to create the Weinstein Company — had angled to buy it back in 2010, with the backing of supermarket billionaire don Ron Burkle, but weren’t willing to pony up that kind of scratch (their offer topped out at $575 million). Well, here’s the happy ending for Harvey and Bob: Today, Colony and its partner Qatar Holdings announced that the brothers were back in the fold, via a newly minted 20-year partnership that will task them to develop new projects off the rich Miramax catalogue. As Harvey told THR, “It’s like opening the treasure at the end of Raiders of the Lost Ark but actually having the keys to the treasure. The deal is structured for 20 years, but we hope it lasts forever.”

Already being bandied about: a sequel to Shakespeare in Love; TV adaptations for Good Will Hunting, Flirting With Disaster, and Swingers; the restart of mid-development projects from the likes of the late Anthony Minghella and Sydney Pollack. And, YEP, Rounders 2. And with quite a bit of detail!

Says Harvey, “I’ve discussed making Rounders 2 with Matt Damon and I would say that’s going to be instantaneous. [Editor’s note: INSTANT-goddamn-TANEOUS!!!] The guys [writers David Levien and Friend of Grantland Brian Koppelman] have a great idea, a way to make it more international where you start the card game in Paris, that’s all I want to say.” [Editor’s note: That is not all he wants to say.] “There might be a certain beautiful Parisian actress involved in it, and then we’re off to the racetrack and Vegas with Matty and Edward Norton, and a new supervillain to replace John Malkovich.” Says Deadline: “Weinstein is eyeing Robert De Niro for that role.” Such an embarrassment of information riches after years of dribs and drabs? I know. It’s a lot. Let’s all process it together, nice and slowly.

In a recent appearance on the B.S. Report, Koppelman actually broached the subject. He preached patience, pointing out that Paul Newman didn’t make The Color of Money until 27 years after The Hustler; he said Damon and Norton are down, and Malkovich and Turturro would probably show up too. Basically: “We have the idea. We’re all waiting for Harvey Weinstein to figure out how to put it together. And when he does, we’re all ready to go. I know that Harvey in the last month has made some noise behind the scenes that maybe he’s ready to figure this out … I’m happy to wait for the minute he says ‘Let’s figure it out. Let’s go do it.'” Aaaand … the time is now! Harvey figured it out! Never, ever doubt that man.

For more on what that aforementioned idea is, there’s this, from a mailbag from this April:

“Q: Where does Worm go when he leaves Binghamton?
—Jeff, OKC

SG: I’ve only been wondering this for 15 years. That’s why I couldn’t resist asking the guys who wrote Rounders, Brian Koppelman and David Levien, for the answer. Here’s what they e-mailed back:

“Worm meant it when he said ‘highway time.’ But he needed to fill his pockets for the road. So he found his way to a backroom game in the Bronx, far away from KGB’s territory. Unfortunately, he forgot that he’d heard about this game from the guy he’d fleeced for the cigarettes in the prison hearts game. That guy had been released too, saw Worm and chased him halfway across town on foot. We actually shot that scene, edited and screened it too, but it ended up on the cutting room floor.

“Here’s what happened after: Worm took full advantage of all the scamming opportunities presented by the Moneymaker/online poker boom. He joined up with a series of dodgy sites in distant locales, promoted, ripped off, profited like mad. After that … well, that’s where Rounders 2 will pick up. In fact, Jeff from OKC, if you and other Rounders fans want to see what happened, e-mail Harvey Weinstein.”

I’ve always loved how Rounders ended. Sure, yeah, redemption at Teddy KGB’s and all that, but that Worm announces “it’s highway time,” and then we actually never see him again? So restrained. So tough. So perfect. That it wasn’t the original ending, though, is fascinating, especially now, when all relevant parties are apparently off and running toward the monumental reunification of Worm and Mike McD.

In a statement today, Koppelman and Levien add, “For years we have been talking to Matt, Edward, [Rounders director] John Dahl and Harvey about the movie we’d all want to make. Rounders was completely life changing for us. We all respect the world of the original film immensely and want to do it proud.”