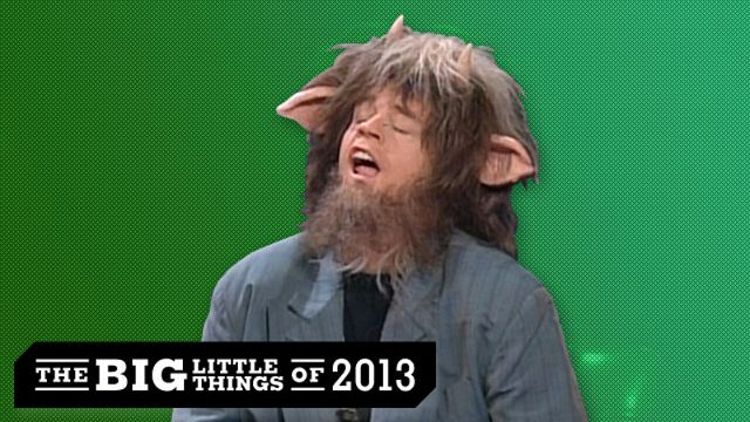 From the premier episode of his podcast WTF, he dove in, broke down barriers, owned his own bullshit, asked the guests to own theirs, and by example, asked us to do the same. Which is why the first 50 or 100 episodes of WTF are unlike anything that existed before. Maron was so real and open and raw that he forced his guests to be the same way, and this led to revelations, breakdowns, stories of suicide attempts, coming-out moments, and feuds settled and begun anew.

I know there’s no shortage of paragraphs, articles, and disquisitions about Marc Maron and WTF on the Internet. Shit, without even doing a search, I’d bet he’s been mentioned at least half a dozen times on Grantland in the past 24 months. (He has. OK. Fine. I did do a search.) Yet here I go. But hang on, because this isn’t really about Maron. It’s about why I still think it’s worth dealing with him, even as he has evolved and as WTF has shifted to something a little more stable most of the time, a little less frequently amazing, a little more like a regular old chat show with a famous host.

Because one thing has not changed. Maron is still the most fascinating figure in podcasting: brilliant, sensitive, and gentle one moment; grating, self-centered, and self-absorbed the next. And when he gets his teeth into something, he does not fucking let go. As a result, he has the capacity to give the listener something rare: genuine, authentic moments between people; honest, bracing, even moving interactions that have the power to actually induce an emotional reaction, to cause the listener to reevaluate a long-held belief, idea, or opinion about the person sitting across from Maron or about Maron himself.

A prime example of this is Episode 435 of WTF, Jim Breuer in the garage with Marc.

Let me start by sharing a long-held opinion of my own, one I would’ve bet I’d never shake.

Goat Boy is my all-time least-favorite recurring character in the history of Saturday Night Live. Jim Breuer’s creation — half boy, half braying goat — was lowest-common-denominator humor, prime drunken, stoner, physical humor, always going for the easy, overt laugh. This was the opposite of everything I loved about SNL, a show I began watching in its first season, when I was 8 years old. SNL’s ironic spirit and subversive tone in my early years had an enormous impact on my sense of humor and worldview. I’ve stuck with the show through all its iterations, including the bad years, so when I say I hated Goat Boy more than any other character, I’m really saying something.

And since Goat Boy was the signature Jim Breuer piece on SNL, I’m also pretty much saying I hated Jim Breuer. Not personally, maybe, but as a comedian and television personality. I assumed that to create such a repulsive character and embody him, you had to be at least a little like him. And that therefore Breuer himself must be a boorish, annoying mook. Sure, he did killer impressions of Joe Pesci and a few other people, and sure, he’d made me laugh a couple of times during appearances on Howard Stern’s show. But still. If you’d have asked me to describe Jim Breuer before listening to WTF no. 435, I’d have said, “He’s a goon.”

Here’s the thing: Breuer knows that’s what smug-ass New York writer guys like me think of him. And he knows why, too. “People make assumptions about you,” Maron tells him at the top of the podcast.

Breuer isn’t surprised. “I look wrecked all the time,” he says. “My eyelids cover half my face.” He doesn’t excuse the brand of humor he rocked on SNL, either, stating that he was the energy guy, the Chris Farley, and he knew that what he was doing was not going to be critic bait.

In the WTF era, that’s all pretty standard comedian-on-a-podcast stuff. You always find out the guy in the chair isn’t exactly what you pictured. That’s a huge part of why it works. But in Breuer’s case, we were just getting started.

Hold up, let me backtrack for a sec, in case you don’t listen to WTF. You need to know going in that there are certain themes, ideas, strands of Maron’s life, usually slights or relationships that went awry, that still haunt him and that he has returned to again and again throughout the run of the podcast.

For a while, he’d go back to these on almost every episode. Things like: slick, good-looking, crowd-pleasing hack comics who didn’t know he was their better; his two ex-wives who never understood him; his parents who didn’t love him the right way; his old manager who didn’t believe in him enough; and, most prominent of all, the Lorne Meeting.

By now, with his place in the culture finally and firmly established, Maron seems to have moved past most of it. He rarely brings up the ex-wives, hardly ever mentions the manager. But the Lorne Meeting remains. Lorne Michaels is the white whale Marc was never able to bring into the boat. Years ago, the story goes, Lorne was considering Maron for the “Weekend Update” chair. And they had the meeting. Which did not go well.

Anytime anyone even tangentially involved with SNL shows up in Maron’s garage, he grills them about Lorne. So of course, with Jim Breuer, an actual ex-cast member, that’s where the conversation has to start.

And Breuer comes through with insight about the Lorne Meeting. It turns out Maron was much closer to getting the job than he ever thought. That Lorne really thought about it. That if the meeting had gone even a little better, the entire course of Maron’s life might have been different. Maron slurps it up.

During the telling, Breuer does an absolutely stellar Lorne impression that turns into a series of Lorne and SNL stories. This is when the podcast gets compelling. As Breuer begins talking about his time at SNL, he reveals that he never really felt welcome there, never felt he belonged. He was a blue-collar kid from a family of half-siblings and an abused mother — all his relatives are either cops or nurses — and the Harvard-educated writers at SNL looked down on him and never wanted to give him a chance to shine. Breuer had to fight for every second of airtime and decided that when he got it, he was going to do everything in his power to make an impression.

Listening to it, I warmed to Breuer the guy, sided with him against those Ivy League jerks (whose genteel tastes probably reflected my own, sadly). Why should these fancy swells get to sit on hardworking, up-from-nothing JB? And why should they have eventually won, as they did, getting him moved off the show despite the huge audience response he got whenever he did manage to get himself on the air?

I need you to understand something. I’m complaining that it’s unfair. But Jim Breuer is not a complainer. He tells his stories with a kind of native intelligence and an understanding of human nature. He knows who those Harvard guys are and why they would never like someone like him. And besides, it’s not like losing SNL was the first career disappointment he ever experienced.

The year before he got SNL, Breuer tells Maron, he had been cast as one of two leads on a network show. The show had been picked up to series, commercials were running on the air, and he was at a hotel with all his lifelong buddies, carpenters, cops, etc., celebrating. Then he got a phone call to come down to his manager’s room, where he found out he was fired, that there was no show.

Imagine for a second the kind of embarrassment that would be. Forget the pain of losing a job. This is national humiliation. And you have to go back to your celebrating buddies and give them the news that the party’s over. Go listen to the podcast and let Breuer tell you how it ends. I’ll say this: I’d never have handled it half as well as he did.

I was walking in the cold as I was listening, on Lexington Avenue in the Forties. I had an appointment to get to, but I was transfixed. I didn’t want to go inside. So I just kept walking and listening; it was worth it. Because Breuer finishes with a story of creative rebirth that ties together caring for his sick father and his decision to do different types of jokes and to write books, which he made after a series of conversations with Bill Cosby. Cosby exhorted him to go out into the world and “Inspiiiiiire your audience. Because your audience wants to be inspiiiiiiirrred!” Breuer’s Cosby impression itself is inspired, warm, and accurate — and as uplifting as the man himself. After speaking with Cosby, Breuer effected huge changes in his life and artistic direction, and as he tells Maron all of this, Maron relates, gets it, gives him an Attaboy! Listening, I wanted to give him an Attaboy! too.

I’ve been in show business a long time. Even did stand-up for a couple years. How could I have made such an amateur mistake in assuming Breuer was just some doofus who’d stumbled onto television to portray this stupid character? Of course it took work, dedication, failures overcome, mountains climbed. Because that’s what it fucking takes. Grit. And to dismiss that, to forget that, is to become like those sports fans who think the players are all overpaid, lucky accidents of talent. It’s to become a douche bag.

WTF is important and vibrant and still must-listen entertainment because Marc Maron knows how to do this to us, how to drag the narrative out of someone, how to find what’s there and bring it to the surface. How to get us to reevaluate not only the performer but ourselves.

By the end of the interview, I didn’t hate Jim Breuer; I kind of loved him. I was ready to admit I was wrong about not only the man but also his work. I went online, found a Goat Boy sketch, and settled in. And I have to tell you …

Fuck Goat Boy. That character still sucks. I mean, one podcast episode, no matter how great, can only do so much.