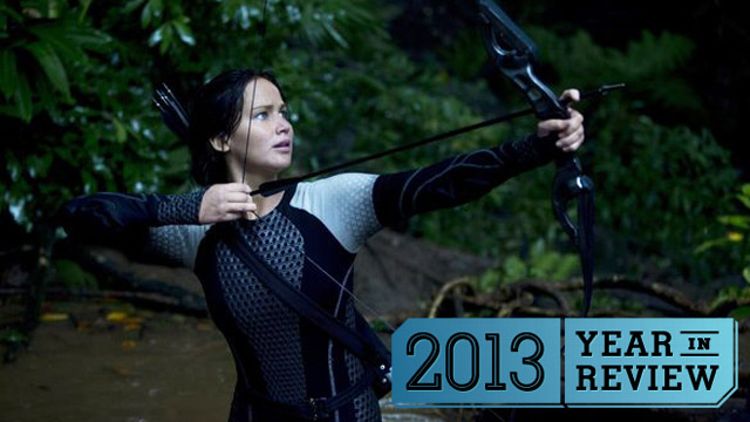 While taking out the trash last month, I passed a beetle hovering in the air. It was big, the size of an avocado pit, and had the chitinous, iridescent hide of a museum specimen. There was something about the way it hung there, almost immobile, the thick buzz of its wings: I immediately took it for a drone.

It was the first, I imagine, of what will be many such moments in my life, instances that will increasingly tip my assumptions of normal away from the natural world. The beetle flew away after a few seconds, and I snapped back to reality. It wasn’t a drone — but in a few years, it might be.

We flocked to the multiplex this year to watch superheroes and space explosions. Depending on where you draw the line, either most or all of the highest-grossing movies of 2013 were science-fictional in affect. It was a boom year for the genre across all media — from Under the Dome to Agents of S.H.I.E.L.D, sci-fi has officially mainstreamed. It makes sense: In this age of cryptocurrencies and Chinese lunar landers, science fiction feels closer than ever, as broad as it is personal. A robot I call Kevin vacuums my living room. We half-live in an Internet rich with simulations, full of algorithms designed to anticipate and emulate human users. Teenagers and celebrities alike measure self-worth in clicks.

The media theorist Kevin Kelly calls this growing bubble the “Technium” and defines it as a “self-reinforcing system” of technological creation that can’t be curtailed any more than life itself. The Technium, Kelly argues, has a kind of will, although it isn’t sentient. And it’s so pervasive as to be invisible — that is, until you suddenly can’t tell the difference between an insect and a sensor.

In one of the first big sci-fi offerings of 2013 — the stylish but middling Tom Cruise vehicle Oblivion — an alien artificial intelligence has cloned the few remaining humans on Earth. Each certain of their individuality, dozens of identical Tom Cruises jet around the planet repairing the very drones that enslave them. Our primary Tom Cruise wrestles with the cognitive dissonance of his implanted memories; like some postapocalyptic Little Mermaid, he collects books and other human artifacts found among the wreckage of civilization.

At the end of each day, the Tom Cruises return to their high-tech homes and dutifully remind the robot overlord that they remain “an effective team.” Actual reality, meanwhile, is hidden from them by the technology they believe sustains their existence. Once the deceit is revealed, it’s a fait accompli that our PTC must enter the mainframe and blow the intelligence, called the Tet, to kingdom come. This same basic rubric took many forms this year. In Neill Blomkamp’s Elysium, the Tet — or Technium — is Elysium itself, a toroidal space colony with physics, and laws, enforced by a single operating system.

And in Ender’s Game, it’s a simulation protecting young combatants from the horror of war. Children train on tactical video games, only dimly aware of a real conflict somewhere beyond the perimeter of battle school. The simulation is so much part of life that when its veil is lifted, the truth — a destroyed planet and the raw responsibility of genocide — takes time to compute. The enemy was never the aliens, but the machine of war itself. By assuming it to be natural, the children were complicit.

When everything is mediated, there’s a thin line between complicity and coercion, particularly when it comes to children. In Catching Fire, the Technium is the hexagon-paneled dome of the Hunger Games arena. Although as much a prison as the Tet and Elysium, its walls can be mapped only through protest: Katniss must shoot an arrow into the sky to see the ripples in the force field.

It requires a leap of faith to shoot that arrow in the first place. You must be extremely resistant to propaganda and willing to question not just the mediated regime, but everything that appears real. As in Ender’s Game, the simulation of war conceals war, technology veils the truth — and children suffer until they learn to be cynical.

Science fiction rides the world. Its authors are archaeologists of the now: The better they are, the more skillfully they can identify the essential anxieties of our moment. Both Catching Fire and Ender’s Game explicitly call out the Technium — and the powerful adults controlling it — as the “real enemy,” something that facilitates our darkest tendencies and seduces us into a convenient denial of reality. That’s what we’re afraid the Technium will become: not a tool to amplify our children, but a vehicle to oppress and delude them.

These movies articulate similar misgivings: that we feel culpable when we see an infant — a human being not yet capable of using language — intuitively pinching to zoom on an iPad. The human mind is extremely plastic, and children pour themselves into whatever technological mold we present them with. Being the future, they inherit our normal. But when normal changes so quickly that we don’t have time to assess it, our children become guinea pigs, and their unblinking trust in the technology we foist into their hands — though it silences car seats the world over — illustrates a future we might not be comfortable with.

In this year’s science-fiction crop, we broke through the Technium to get a glimpse at the other side. In the case of Catching Fire, that breaking-through was literal: a charged arrow right into the technological force field, which, once broached, tumbled away into a ruin, letting the sunshine in. Ender, on the other hand, needed to dance with the demon to sate it. Only then, in the last moments of his story, could he ride the game interface into a profound connection with an extraterrestrial being. They straight-up reboot the computer in Elysium; in Oblivion, it’s entered, virus-like, and annihilated from within.

Films allow us, vicariously, to smash the Technium — or at least rearrange things so we can jostle more assertively into its midst. That’s what storytelling is, of course: a way to write ourselves into the future. It might not reflect, in a one-to-one manner, what’s actually happening in the world, but if it did, it wouldn’t be sci-fi. It’d just be the news, which is why William Gibson and Neal Stephenson don’t even write the stuff anymore.

With the massive popularity of science fiction this year, we seem to have defined our unease with the Technium. Film has teased its contours from our latent, collective paranoias. Like most nightmares, it’s a bit formless, and its boundaries ebb into normal life. While watching Naked and Afraid on the Discovery Channel, it’s hard to tell whether the show is cribbing from The Hunger Games or prophesying it. Either way, I tune in, stirring with inklings of the bloodlust that science-fiction villains find effortless.

It’s not clear what lies on the other side. Once the machines are silenced, we vaguely remember a simpler life, but it’s no utopia either. Outside the Hunger Games arena lies revolution, more problems, sticks and stones. In the real world, technology’s seductions are manifold, and sometimes the only thing preventing it from being an unequivocal force for good is our own weakness. So it envelops us, even as we anticipate being suffocated.

For the three seconds I thought the beetle in my driveway was a drone, I lived in a different world. It was the world my children might inherit. The rules were different. Nature was bigger, with new definitions for life and intelligence. It was a world I was suddenly afraid of letting myself become too comfortable living in.

I looked at it good and hard, though. It was shiny, and then it flew away. For now.

Filed Under: Oblivion, The Hunger Games