Apocalypse Fever, Sausage Fests, and the White House Under Siege: Thoughts on the Summer Movie Season 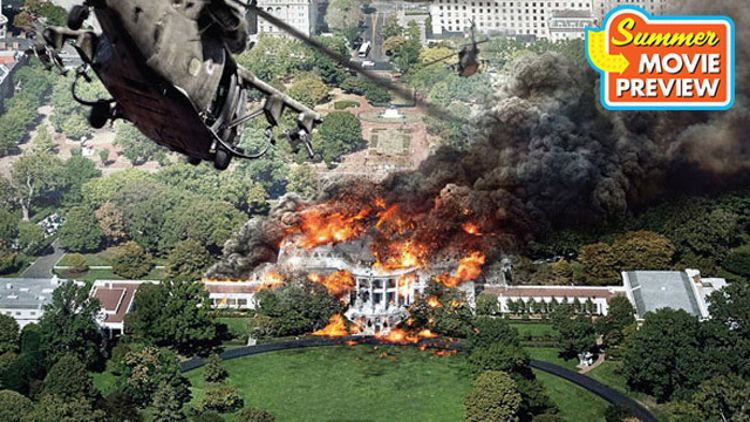 Summer is always an endurance contest: week after week of Movies You Have to See. Once upon a time the season was four months, like actual summer. But climate change has managed to monkey with the Hollywood release schedule. Now summer starts whenever a studio says it does; last week Universal called summer first. So the season pretty much began in the middle of April, with Oblivion, which delivers Tom Cruise as the last man on Earth. The movie industry is hoping you like the end of the world. It’s the source of the season’s other endurance contest: seemingly endless months of planetary devastation, alien invasion, and surviving. Armageddon is the new Avengers.

Maybe it’s foolish to wonder whether the bombing of the Boston Marathon and the subsequent citywide hunt for the perpetrators wasn’t summer movie enough. Maybe this should have been the summer Mark Wahlberg partied with the vulgar teddy bear. We are strong, however. Absentminded, too. So if Brad Pitt wants to race around the globe in the name of stopping a zombie pandemic, we might be helpless not to watch. But there’s something going on when even the comedies are horning in on that action. I saw the poster for This Is the End, with the faces of all those funny people — Seth Rogen, Jonah Hill, Danny McBride, Craig Robinson, James Franco, Jay Baruchel — and assumed it was about a bunch of man-children graduating from night school or getting drunk at a wedding or something. It might still be about that. But it’s also about how a disaster has hit Los Angeles and left them stuck with each other. I’m going to go ahead and predict that Robinson dies first.

Even though they all deal with the same themes, each of these movies might manage to say something about who we are. Neill Blomkamp’s Elysium feels like an even sharper social allegory than his District 9. The 1 percent have their own planet, while the hoi polloi live on a blighted Earth. Matt Damon is the 99-percenter who dares to create class harmony. Jodie Foster is the mayor of the 1 percent, and she’s not having it. M. Night Shyamalan’s After Earth puts Jaden Smith and his dad, Will, in great-looking space suits with webbing that lets them fly. They get stranded on a distant planet, but wind up fending for themselves on a people-less Earth. They’ll fight wild animals and somehow keep their fades tight. But even though I smell a tale of evolution, you watch the trailer and yearn for a little maternity. It’s pointless. This might as well be After Jada.

It would be nice to see a woman really get in on the action, and this isn’t to suggest that women wouldn’t want to see, say, Star Trek Into Darkness, Man of Steel, or The Wolverine (also known as Man of Adamantium). Who doesn’t want to see J.J. Abrams’s camera drift toward Chris Pine’s crotch or watch Hugh Jackman’s furry pecs (that really doesn’t get old) or see a very fit fellow whip off his eyewear and start flying? It’s just that if it’s going to be another sausage fest, some people are going to become vegetarians.

It’s true that Amy Adams is sure to make Lois Lane a little steely, and Guillermo Del Toro does appear to have devoted half of Pacific Rim’s badassery to Rinko Kikuchi. But still: Respectively, it’s Superman and a movie that looks extremely fun and like Transformers at the same time.

If it makes good on the promise of its predecessor, Fast & Furious 6 should belong to the revivified Michelle Rodriguez. Sofia Coppola brings us The Bling Ring with Emma Watson and friends breaking and entering in Beverly Hills. The Heat brings back Sandra Bullock and plunks her beside Melissa McCarthy for law-enforcement shenanigans. I hope these movies will be big hits, because at some point even boys are going to start forgetting what a leading lady looks like.

But if this is the season of doom, it feels weird that no one has the gumption or maybe just common sense to put Bullock, Adams, Viola Davis, or Angelina Jolie at the center of one of these super-duper productions. Instead, the closest we get is Foster doing some kind of Margaret Thatcher–F.W. de Klerk two-for-one for Blomkamp. I’m betting she’ll be terrific. But she’d have been just as interesting as the leader of the 99 percent.

It’s not as if the blockbusters don’t have their fingers on some kind of political pulse. It’ll be hard to resist rubbernecking at a movie starring President Jamie Foxx, even if that movie — White House Down — is the third this year in which the commander-in-chief is under siege. Whatever President Obama’s legacy turns out to be, the movie industry’s reaction to him has been dismaying. This planet has been invaded, trashed, and totally fucking abandoned more than it has during anybody else’s presidency — not to mention the number of times the White House has been terrorized. Hollywood has turned “hope” to “nope.” Make of that what you will. But we used to call it summer blockbuster season. This year we’re going to have to give it a more depressing name: the Barackalypse.