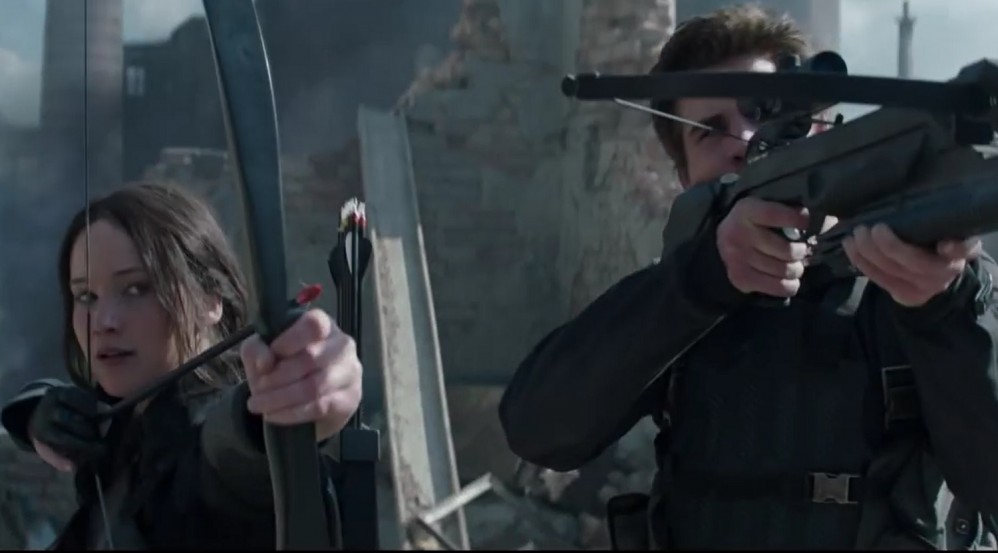 For most of us, Thanksgiving’s just a federally sanctioned excuse for tryptophan-laced gluttony and awkward political conversations with your extended family. (Or, if you prefer blood sport, setting up a pup tent in your local Best Buy parking lot and practicing your right hook.) For Hollywood, it’s the last stop before the final reckoning, when everyone rushes the box office horn of plenty, fattened by a five-day mega-weekend during which the most any of us hope to accomplish is to roll ourselves toward the cineplex and pass out in front of all of those pretty superstar faces.

Yes, Thanksgiving is the movie industry’s Stalingrad. Tides are turned, fortunes made, causes lost or won on the backs of 3-D animated penguins and one charismatic young archer. So, how did they do? Well, Miss Everdeen battled valiantly — and The Hunger Games: Mockingjay — Part I somewhat redeemed itself for that “disappointing” $123 million it earned last weekend — but, alas, it wasn’t quite enough. This year the total box office dropped 20 percent compared to Thanksgiving 2013. Even though the feast has passed, let’s rummage through the fridge and see which leftovers have stayed fresh and which we better toss in the trash if we know what’s good for us.

There was little doubt that whoever wanted to see Mockingjay (but had somehow avoided all 4,121 theaters where it was playing last week) would catch up over the Black Friday weekend. Thus, the District 12 crew took the biggest slice of pumpkin pie this Thanksgiving with almost $57 million domestic Friday-to-Sunday and $82.6 million over the extended five-day weekend, dropping only 53 percent from its simultaneously stunning and underwhelming opening. That’s the fifth-best Friday-to-Sunday (and third-best overall) Thanksgiving haul of all time. In reality, Katniss is just chasing herself: Catching Fire captured the title with $109 million last year. And honestly, the reason T-day 2014 lagged so far behind is that 2013 featured the perfect storm of Fire and Frozen, incidentally the second-biggest Thanksgiving movie of all time.

Still, that side-by-side comparison with Catching Fire isn’t particularly flattering, even if we’re talking about all-time records. Even though Mockingjay the First has already scored $225.7 million in North America, Catching Fire had $296 million domestic by its 10th day, which means Mockingjay probably won’t get anywhere near Fire’s $423 million domestic total, let alone the original’s $408 million. Thus, Mockingjay is officially the disappointment in the family; expect her to turn up on cable next Thanksgiving, reeking of cheap pot and making out with her unemployed boyfriend at the dinner table.

Nonetheless, the only partially mind-blowing returns at the domestic box office have all but put the final nail in 2014’s coffin. The Black Friday bonanza just wasn’t big enough, and year-to-date 2014 stands at $9.44 billion compared to 2013’s $9.86 billion. Not even an avenging Hobbit can save us now. After that brutal summer, the domestic box office is likely to give Hollywood a big old lump of coal for Christmas in the form of a 4 percent percent profits cut instead of its usual annual raise. All of which means no swimming pool for the Griswolds this year.

But America is so 20th century, man. These days you have to think big picture: Go through the international looking glass and it’s a box office wonderland. Mockingjay conquered the world for a second week in a row with $67 million, pushing its global total to $480 million in just two weeks. And it won’t even open in China until 2015, so it might at least beat the original’s $691 million worldwide total, even if it doesn’t hit Catching Fire’s $861 million. Interstellar also looks a whole lot better on a global scale: Even though its $147 million domestic tally feels less than IMAX-sized, Christopher Nolan’s cinematic lecture on the theoretical physics of love has earned $543 million worldwide. Even Penguins of Madagascar, which got schooled by Big Hero 6 and underwhelmed with $36 million over the holiday period (one of the lows for a Thanksgiving animated film), comes out a winner internationally. It’s already earned nearly $100 million worldwide. Hell, it opened in China before the U.S., which gives you an idea of who’s buttering Hollywood’s bread these days.

The one certified loser this weekend was Horrible Bosses 2, by all accounts the sloppiest of seconds scraping the bottom of an already shallow barrel. It debuted at no. 4 with $23 million for the holiday. That’s technically the highest opening for an R-rated comedy over Thanksgiving, but it’s below both expectations and the $28 million opening of the original on a plain vanilla weekend in 2011. Nonetheless, the sequel cost only $43 million, even with Chris Pine and Christoph Waltz on the payroll, so if it indeed drops like a rock next weekend, Dumb and Dumber To–style, it’s more a box office faux pas than an outright turkey.

Shakespeare in Love, Chicago, The Artist, The King’s Speech: Time to welcome a new kid to the club. The Imitation Game opened with the second best per-screen average of the year (after The Grand Budapest Hotel), making $482,000 in only four theaters. And you need exactly two words to explain why: Harvey Weinstein.  The man knows the math behind the Oscar formula better than anyone. Take one prestige biopic, add a sexy leading man, preferably with a British accent, and divide by World War 2. Even if the script plays a little too fast and lose with Alan Turing’s life for some, Benedict Cumberbatch is something to behold as the closeted math genius (and godfather of the digital age) who broke the Nazis’ unbreakable Enigma code. Since no one plays the Oscar game better than Harvey, this auspicious start is just the opening salvo in a long awards-season campaign that will inevitably storm the Academy’s ramparts and empty out middlebrow wallets across the country. But the Oscar formula proved a good recipe for the Thanksgiving holiday in general; The Theory of Everything expanded into 800-plus theaters and grossed $9.6 million while Birdman stayed in the top 10 with $2.4 million over the five days, bringing its total nest egg to $17.2 million. Not bad for a movie about a delusional, narcissistic actor adapting Raymond Carver for Broadway.

'Do You Like Prince Movies?' Podcast: 'The Hunger Games,' 'Foxcatcher,' and Remembering Mike Nichols

Lightning Round: Notes on Our First Thousand Viewings of the ‘Star Wars: The Force Awakens’ Trailer