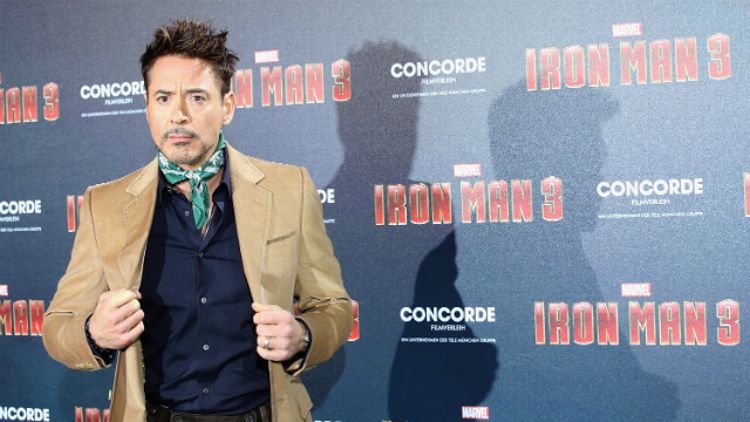 Ahead of his next just-like-clockwork blockbuster Iron Man 3, Robert Downey Jr. invited GQ’s Chris Heath to his Malibu mansion for a bit of a chat. The results are illuminating, invigorating, and well worth your time in full. But just to get you started (you really should read the whole thing), we plucked out some interesting bits.

1. OK, first of all: that ridiculous $50 million number The Hollywood Reporter threw out as Downey’s paycheck for The Avengers? Totally true! Because of a prescient deal Downey made when signing on for the first Iron Man, he gets a nice slice of profits from the various Marvel franchise installments he’s involved in. So when The Avengers became the third-highest grossing movie of all time (not accounting for inflation; hold your head up high, Gone With the Wind!), our dude got paid. Here’s Heath, quizzing him on it:

Is that number about right?

2. Now let’s not forget Downey was always a long shot for Iron Man (apparently Marvel originally said “Under no circumstances are we prepared to hire him for any price”), and the fact he’s even at this world-conquering point is a bit of a shocker. And the lesson? Work hard, kids, and anything is possible.

The way Downey describes what happened in that period [before the audition] seems itself like an origin montage from a superhero story: a time of focused preparation and of “spiritual/ ritualistic processes” that he still considers private and prefers not to detail. He worked on the scenes over and over: “The missus says she could’ve woken me up in the middle of the night and I’d have recited the audition dialogue in double time.” “It was all shock, awe, conquer—it was about devastating the competition.”

3. He’s been Oscar-nominated twice, for two very different performances: 1992’s Chaplin, and 2008’s Tropic Thunder. As for the possibility of him ever winning one, he’s typically humble. Ha, no, just kidding, he’s not that at all:

How much would you like to win an Oscar?

“Well, I know it’s going to happen … I, personally, would be shocked if we went to the end of the tape now and I didn’t have at least one.”

4. Other projects kicking around: The Judge, which shoots in June, and stars Downey as a lawyer whose father is a superior-court judge, with Robert Duvall playing pops; a Pinocchio project that he pitched to Warner Bros., with Geppetto “as a cross between Jake LaMotta and Chico Marx”; a possible directorial debut on another one of his own ideas, this one an enigmatic Halloween movie in which he’d also star, as a “Village Voice reporter on the run.” Project not happening: the Inherent Vice adaptation, which his pal Paul Thomas Anderson decided to do with Joaquin Phoenix instead. RDJ: “I think he told me I’m too old … which I love when people tell me.”

5. OK, and now the big reveal — Downey wants to retire at 50. Well, no, just retire from Iron Man movies. Probably. Referencing his father, the director Robert Downey Sr., Junior says “there’s this kind of legacy of souls from what I consider to be a very particular time in entertainment, and I’m sensing a return to that … It’s not unlike: I heard Brady signed on for three more years with New England, and then he’s done being a QB, because he’ll be 40. I’m 47, and I’ll be 50.”

So that’s the line in your head at the moment?

So what stops at 50? Superheroes?

“I don’t know. I don’t know. Right now I don’t have a contract to do anything, and I did for the last five years.”

But how will he support his family?! Oh, right, right: $50 million.