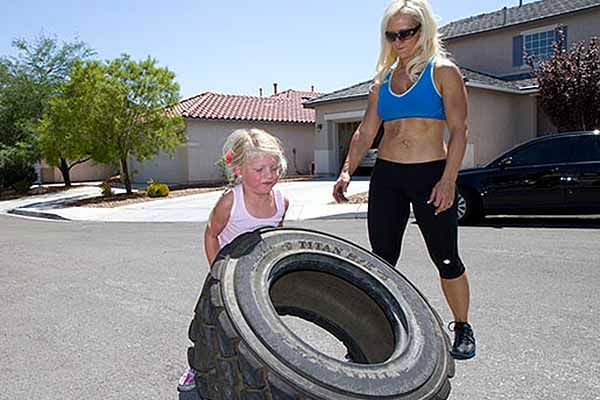 Who Is This Now? The Best family.

Why Are We Watching Them? They claim to be the strongest family in the world.

How Did They Get Here? When father Nick was in high school, he was short and skinny, and apparently the emotional scars remain; he started seriously lifting weights about the same time he went through a huge growth spurt, and the rest is history.

What’s the Grossest Thing We See? The Bests have also involved their young children in their weightlifting. Even though “experts” recommend that little children not lift weights heavier than a pound each, the Bests’ daughter Jessica, who is 5 and weighs 46 pounds, can lift 100 pounds. Seems healthy.

What Have We Learned? Nick: “You’ve really got to hate yourself to make yourself want to hurt that bad.” If you like yourself, you should have a cookie.

Why Are We Watching Them? Father Jim Bob and eldest son Josh have entered in a not-at-all-contrived weight-loss contest.

How Did They Get Here? Evidently, they have gained a lot of sympathy weight during their respective wives’ many pregnancies.

What’s the Grossest Thing We See? When Jim Bob and Josh go on a double date with their wives, Michelle and Anna, it is understood that Michelle and Jim Bob’s eldest daughters will be doing the babysitting, even though their son Joseph is 17, still lives at home, and is perfectly capable of pitching in. Later, when we learn that Josh’s BMI puts him in the medically obese category, Anna mentions her concern about how his health might decline in the years ahead: “Ten years, maybe five or six more kids …” The couple already has two children and, as of filming, is expecting its third; in 10 years, Josh will be 35. And maybe have nine kids.

What Have We Learned? The second generation of Duggars is also hard at work on exhausting this country’s natural resources via overpopulation.

Why Are We Watching Him? He’s hoarded his house to such a dangerous degree that at least two of his children suspect that if there had been proper paths to egress in the home, EMS might have reached his late wife Tammy Jean more quickly when she died of a heart attack in their bedroom last year.

How Did He Get Here? Kelly has suffered a number of serious losses — Tammy Jean’s was just the latest, preceded by the death of his partner Kate, the mother of several of his children, and the mysterious disappearance of his daughter Tiffany — so the consensus is that he clings more tightly to his things because the loss of loved ones has imbued them with significance for Kelly.

What’s the Grossest Thing We See? A thick pile of dust and dirt on the kitchen floor features a couple of bones. I hope they are bones from discarded food. I really, really want to believe that they are.

What Have We Learned? If you have a photo of yourself with Paul McCartney (Kelly used to be a member of the Canadian band Crowbar), don’t keep it in a suitcase in a school bus in a snowdrift in western Canada, because it will end up damaged by moisture and rodents, and the Canadian music archivist won’t want to take it and might also judge you a little. If he can even find it, which he probably won’t.

Who Is This Now? Anthony.

Why Are We Watching Him? He’s telling us about his distinctive ink.

How Did He Get Here? When he was about to turn 40, he had “a midlife crisis” and decided the best way to address it would be to tattoo his entire head: face, crown, skull, neck … everything.

What’s the Grossest Thing We See? The premise behind his tattoo is that a clown’s had his face ripped off, and then sewn onto Anthony’s face. So basically the answer to “How do you make clowns EVEN CREEPIER?” is permanently inked onto Anthony’s head.

What Have We Learned? The only thing worse than being 40 is being 40 and unemployable because of the terrifying tattoo you got all over your entire head.

In 10 years, Tara Ariano will still have zero children.