Freak Show & Tell: ‘Doggie Palm Reader’ Is a Job That at Least One Woman Has 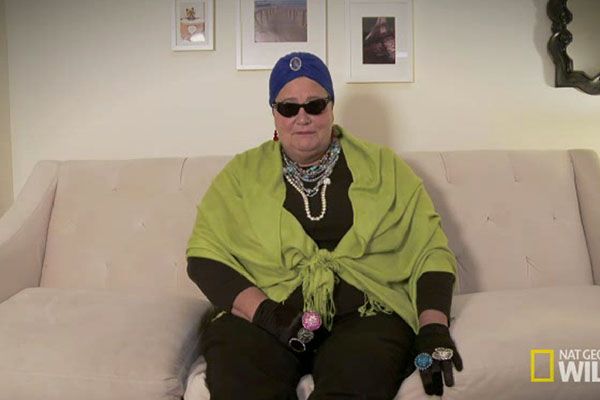 Who Is This Now? Cynthia.

Why Are We Watching Her? She’s letting us watch while her dog, Toto, meets with a unique expert.

How Did She Get Here? She’s “a very spiritual person,” and if she regularly consults with psychics, shouldn’t her dog get the same kind of attention?

What’s the Grossest Thing We See? Madrette, a “paw reader” who purports to tell the future by interpreting dogs’ paint paw prints. I mean, honestly. Madrette. Look at your own life and please make some better decisions. THE OUTFIT ALONE.

What Have We Learned? I will never stop being shocked by the totally idiotic ways people waste their money.

Who Is This Now? Olivia.

Why Are We Watching Her? She disagrees with her father about how to spend her infant daughter Eden’s first Halloween.

How Did She Get Here? Olivia had a hard-partying late adolescence, during which she got pregnant (and only recently determined, with the help of a DNA test, which of two possible candidates had actually fathered her baby). Now she’s living with her mother and church pastor father while she raises Eden.

What’s the Grossest Thing We See? Though Olivia is excited about taking Eden out for some completely innocent trick-or-treating fun, Olivia’s father, Mark, is determined to reclaim the day as some kind of autumn worship gathering he just made up in order to be a wet blanket on Olivia’s cute plans. In the end, even though Mark wants members of his congregation to “pray for freedom from demonic oppression,” in that he’s “been given the authority to deal with the demonic on the earth,” Olivia still dresses Eden up in a totally adorable lamb costume and goes trick-or-treating with one of her sisters. And Mark still tries to make her feel guilty about it afterward.

What Have We Learned? Given the way that Olivia’s parents accepted her and the product of her accidental pregnancy from premarital sex, I had thought they were pretty cool for church people. Turns out they’re not!

Who Is This Now? Phyllis and Patty.

Why Are We Watching Them? They are under serious pressure from their municipality to clean out the house they’ve hoarded past livability.

How Did They Get Here? When they were 10, their 19-year-old brother, Donnie, was killed in the Vietnam war. Their mother wouldn’t allow a funeral for him, so the twins never really got closure. And for the past 40 years, their daily routine has begun with them going out shopping for anything and everything. Donnie’s death “just kind of left a big hole,” says one of the twins (sorry, I didn’t learn to tell them apart!), “so we might’ve started buying more.”

What’s the Grossest Thing We See? Here’s how code-enforcement officer Robert O’Rear describes the scene in their bathroom: “We have material in the bathtub, but I can only guess — It looks like mostly cat fecal matter, but I would not be surprised if there were human waste in there as well.” Here’s O’Rear’s warning to the twins about why they should no longer live in the house: “You could contract a number of diseases just from contamination that’s in there.” And here’s a clean-up expert listing the diseases the haulers are told they might risk by cleaning out Patty and Phyllis’s house: e. coli, typhoid, paratyphoid, cholera, Hanta virus, gastroenteritis, and Hepatitis A.

What Have We Learned? You and I might be concerned about whether we have enough money in our retirement accounts to keep us in the style to which we’ve become accustomed once we’re old. Yet somehow Phyllis and Patty — even though they’ve hoarded two houses so badly that they’ve had to be demolished — have accumulated enough money to buy a new home for themselves. So maybe you and I will be fine.

Why Are We Watching Her? She’s showing us all the fun she has with her pet squirrel, Sugarbush — kissing her, talking baby talk to her, dressing her up in tiny little costumes and shooting photos of her.

How Did She Get Here? One day, when Kelly was a little girl in Georgia, her dad brought her home a flying squirrel as a pet, and she’s been way into squirrels ever since.

What’s the Grossest Thing We See? “Over the past 12 years, Kelly has lost five pet squirrels — all named Sugarbush.” Guys.

What Have We Learned? This loon is married to a man who works three jobs (to her zero) to finance her Sugarbush habit, which she estimates amounts to “maybe half a million” dollars. So if you are still single, maybe you need to raise your standards!

Who Is This Now? Carol.

Why Are We Watching Her? She’s trading places with Marie, a wife and mother who’s Carol’s opposite in almost every way.

How Did She Get Here? Carol had struggled with her weight since she was a child, but in recent years lost 80 pounds and is grimly determined to keep it off. Marie, the matriarch of a large Italian family, has a very different philosophy: “In our house, we count our blessings, we count our love. I don’t need to count pretzels.”

What’s the Grossest Thing We See? On the occasion of her last meal before presenting her own rules, Carol takes the opportunity to needle Marie’s daughter Gianna about the heavy Italian meals their family routinely eats, asking, “You don’t have any fears that it’s going to catch up with you later?” Leo, Marie’s husband, pointedly interrupts: “She’s too little to understand what you meant by that.” Gianna is 8.

What Have We Learned? Carol is ensuring that her daughters will inherit her own self-loathing body image later in life, if they haven’t already, which they probably have.

Who Is This Now? Jessa and Jinger Duggar.

Why Are We Watching Them? They’re spontaneously volunteering to work a day at a local coffeehouse, which they’re doing impulsively and not at all for the benefit of the cameras or the show’s producers.

How Did They Get Here? The owner of the coffeehouse uses the proceeds of the business to fund an orphanage in Guatemala, so the cause is dear to the girls’ hearts.

What’s the Grossest Thing We See? The girls’ help is not actually that helpful, given that they have no coffeehouse experience and require a great deal of training for a one-day gig, but that’s more annoying than gross. What is gross is when their father, Jim Bob, arrives to support them (along with the rest of the Duggar brood, who take 10 full minutes to place their order), and notes that his pretty daughters are attracting a lot of male attention. But all the Duggars know that if any young men want to ask out Duggar girls, they have to ask Jim Bob’s permission, even though Jinger is 19 and Jessa will turn 21 this year.

What Have We Learned? The Duggar girls might have dowries?

Who Is This Now? Heather.

Why Are We Watching Her? She’s letting us watch while she gets a pair of tattoos covered up.

How Did She Get Here? One boozy night, she had some friends draw a couple of silly cartoons: a cowboy boot filled with anthropomorphized french fries, and a guitar-playing hot dog sticking out of a pocket with “I ♥ Nashville” on it. She was so charmed by them that, the very next day, she decided to get them tattooed on her breasts (one design per breast). Now she’s not so crazy about them. (And if my description of the french fry boot sounds familiar, it might be because she was on What Not To Wear earlier this year.)

What’s the Grossest Thing We See? Heather is accompanied to her cover-up appointment by her fiancé, Will, who has maybe the biggest, most stomach-turningly grotesque ear gauges I’ve ever seen.

What Have We Learned? While we’ve all heard tell of “drunken mistakes,” apparently “hungover mistakes” are a thing, too.

Tara Ariano has also been given the authority to deal with the demonic on the earth.