Freak Show & Tell: ‘It Was As Though a Large Christmas Tree Was Growing Out of Her Upper Body’ 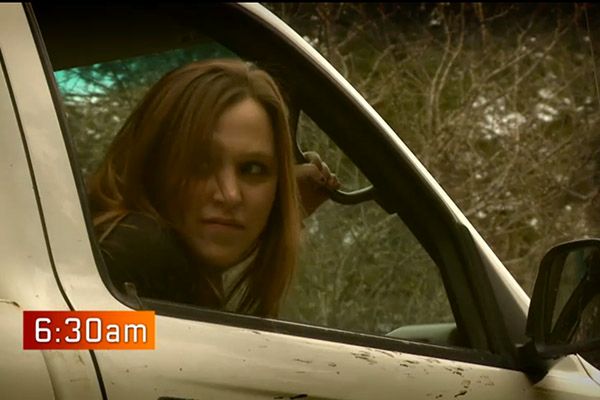 Why Are We Watching Her? Against all odds, she’s survived a unique injury to her neck.

How Did She Get Here? Driving along a remote forest road with her husband, Michelle got impaled by a two-foot spruce tree branch that caught her throat through the truck window.

What’s the Grossest Thing We See? “It was as though a large Christmas tree was growing out of her upper body,” says Tony, one of the EMTs who helped to stabilize Michelle before taking her to the hospital. And it does. That’s exactly what it looks like. Horrifyingly.

What Have We Learned? When Michelle’s husband, Danny, describes the hour-long drive over rough roads just to get Michelle from the site of the impalement to the nearest marker of civilization — the hunting lodge that’s still a 20-minute helicopter ride from the nearest trauma center — one can’t help but reflect that there are some real pluses to city living.

Who Is This Now? Michael and Sarah Pope, and their son Samuel.

Why Are We Watching Them? They’ve come for dinner with mega-parents Jim Bob and Michelle Duggar.

How Did They Get Here? Samuel was born prematurely, so Sarah ended up in the same NICU pod with Michelle when her youngest daughter, Josie, was born (also premature).

What’s the Grossest Thing We See? It’s a tie between the preparation of Tater Tot Casserole (ground beef, Tater Tots, and “a creamy sauce” of indeterminate composition) and the sight of both toddlers walking barefoot on the kitchen counter where dinner is being assembled.

What Have We Learned? Hygiene is the first casualty of an absurdly oversize family.

Who Is This Now? Pelinsu.

Why Are We Watching Her? She’s facing a tough fight for prom queen at her Miami Beach high school.

How Did She Get Here? She cut 35 days of school and gained a reputation as a hard partier.

What’s the Grossest Thing We See? Pelinsu is definitely a spoiled dick — her own mother, Tara, tells the camera, “She’s, like, so mean!” and then laughs as though Pelinsu’s lack of character isn’t partly Tara’s fault — but that doesn’t excuse the narrator’s rude remarks about Pelinsu’s (great) figure, particularly given the pressures teenage girls face with regard to their body image. To wit: “It’s been two months since Pelinsu’s tried on her dress. Let’s hope she’s been skipping the ice cream sundaes! … Suck it in, girl; you only have to wear it once! … Maybe that dress would fit better if she lost a few pounds of attitude!” It’s not OK.

What Have We Learned? Calling itself “Television for Women” evidently doesn’t preclude Lifetime from broadcasting sexist “no fat chicks” BS.

Filed Under: 19 Kids and Counting, I Was Impaled, Lifetime, Reality TV, The Lunatic Channels, TLC