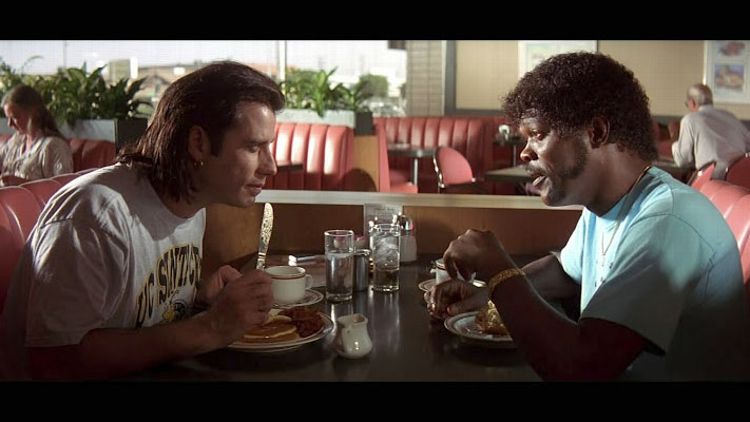 The life and times of Quentin Tarantino have gotta be great, right? Sure, making ambitious, super long movies must be taxing. But QT in the offseason? Just listening to albums both obscure and classic, watching all the best old films and all the worst old films, and eating good food. That’s probably basically it. The music and film connoisseurship has been sufficiently noted in the 21 years since Reservoir Dogs. But what about Tarantino’s love for grub, his propensity to set scenes in that heart of domesticity and good times, the kitchen? My DVD of Pulp Fiction included a fake menu to a fake restaurant, for chrissakes. (Were you aware JackRabbit Slim’s serves three flavors of pie?) The amount of impeccable dialogue exchanged over some form of meat product is a marvel. This side of Tarantino is something of an underdocumented phenomenon, so on this day of Django Unchained’s DVD and Blu-ray release, we’re looking back at the 20 best Tarantino scenes where kitchens and foods factor in. Spoilers for Django and many other films herein.

Nothing of much consequence here, no real additions to The Quotable Tarantino, but there’s a commendable amount of chewing happening on Randy Brooks’s end of the booth. The man is never not chomping or handling his food. The fact that this scene involved eating was important enough for Tarantino, in his screenplay, to write — only for his own edification — that Holdaway “digs into a Denny bacon, cheese and avocado burger. He sits in a booth all alone. He’s waiting for somebody. As he waits, he practically empties an entire bottle of ketchup on his french fries, not by mistake either — that’s just how he likes it.”

Candie’s last meal before getting blasted by Schultz. It’s a pivotal moment in the story, but a little less memorable thanks to the unapologetically intense dinner scene prior and the gore fiesta that follows. Candie’s face upon finding out Alexandre Dumas was black, though?

If off-brand Pop-Tarts didn’t eject from the toaster so aggressively, Vincent Vega might still be alive today. (Side note: Butch’s story line has always felt like the least inspired of the Pulp Fiction vignettes, and perhaps it’s no coincidence that food is only tangentially involved. Toaster strudels and a mention of blueberry pancakes and pie — that’s it.)

Tarantino’s nomenclature here hasn’t gotten any less lamentable. But the scene did give us the phrases “you don’t wanna fuck my shit up you’re fuckinmyshituprightNOW!” and “serious gourmet shit.”

In which De Niro and Bridget Fonda engage in a most atypical love scene. Budd’s kitchen takes up roughly a third of his mobile home. It’s where we get a glimpse of his life (lots of margaritas slopping into mason jars), and the full viewing of his snakebitten demise. It’s not the way anyone wants to go. Rest in peace, Budd. You were loved. (And apologies that your brother gets such a more dignified scene in his own kitchen.)

The camera circles a little differently, but this is the Reservoir Dogs opener updated for 2007, with the male badasses ushered out and the female badasses ushered in. It’s written through with a long account of a made-up, inconsequential story instead of instantly relatable pop culture jabber, but Tarantino’s dialogue is still music. These seven minutes of nothing-talk remain almost entirely transfixing. It’s just a pleasure to have a seat at this table.

Forgive the Shakespearean dialogue (“I beseech you on behalf of my daughter” — what the fuck?!), a thing that seems to fizzle out as quick as it kindles (plus, possibly as recompense, Uma Thurman winks at everyone who remembers her drawing-a-square-in-the-air bit from Pulp Fiction). The movie hasn’t even been rolling for 15 minutes and a woman’s using a box of cereal to conceal a gun and then she’s getting daggered in the chest in front of her kid daughter. Thanks for the heads up and everything, Tarantino. Shame on us for expecting two characters just to have a cup of coffee and catch up (ketchup? Anybody?) for a minute.

It begins as the Reservoir Dogs diner shot again, only with a poodle at the table. There’s a comedic/nightmare-giving cutaway to screechy monster Goebbels’s screechy monster sex. The conversation’s more plot-oriented than these hovering roundtables tend to be, but it’s a serviceable scene. UNTIL Hans Landa shows up five minutes in, and that kind of Kill Bill fuck-shit-up mental alarm bell music starts thrumming. Tarantino does an achingly patient slow zoom on Mélanie Laurent’s face as she realizes she’s about to have a sit-down with the man who had her family machine-gunned. Christoph Waltz says “attendez de la crème‬.” The camera smooches the cream, then the strudel, then the cream again — both shots that will make it into the requisite (but brief) supercut of Tarantino food and beverage close-ups someday. Waltz’s smug, conspiratorial delivery appears a complete afterthought as he savors the strudel — praise every higher power that Landa was never taught to chew his food before speaking. There’s a bold insistence, both Landa’s and Tarantino’s, that we enjoy this delightful dessert in the midst of this loaded face-to-face.

All Jules and Vincent’s misadventures have taken place in the course of a single morning. It’s time to downshift into a little philosophical exchange over eggs and bacon — whether eating pork is vile, where a dog ranks on the filth scale, how far personality goes with a pet, etc. Beyond just being quirky, it’s a great way of showing how we too often yak about bullshit when we’ve got earthshaking stuff on our minds. The reveal that Jackson and Travolta at the same diner from the film’s start, the place Honey Bunny and Pumpkin are seconds away from terrorizing, is terrific. The finale — “say it, SAY ‘BITCH BE COOL,’” “I’m tryin’, Ringo, I’m tryin real hard to be the shepherd” — is even better.

We get to see Bill for what he is: an Ordell Robbie, a True Romance Drexl — just another megalomaniacal but charming snake. Bill makes a sandwich. Bill shows off his parenting skills and his bond with his daughter … while probably trying to create a tender moment for B.B., knowing on some level that she may never see her father alive again. David Carradine also gets to drive a spellbinding sequence about life and death. For all the shit Tarantino gets about his short attention span, it’s incredible he’s created so many characters who are deeply interesting enough to rivet us no matter what the hell they’re talking about, or what kind of chow they’re preparing or devouring.

The scene is barely about food. Till Vince Vega goes, “Royalewithcheese” all suave and knowing, like this:

And Jules goes, “Royyyale with cheese!”

And then they say “Le Big Mac” and “Iawno, I didn’t go into Burger King” and “I seen ’em do it, man, they fuckin’ drown ’em in that shit” even though they’re on their way to do some A.M. murders. Another seminal moment in Tarantino showing you how hard he’ll subvert your expectations of how a movie’s supposed to go.

A scene about a nonexistent restaurant written solely so Tarantino could imagine a pop culture museum where people can also eat, a wax museum with a pulse, the kind of place any Elvis man would love. OK, the scene’s not really ABOUT that, but it kind of is. The restaurant’s character is as important as the musings Vince and Mia are going to bat around at the table. In an 80-second tracking shot of Travolta entering the building, the restaurant’s character gets established better than that of many humans in many full-length films. The attention to detail is immaculate. The $5 shake discussion ages wonderfully comically for anyone who’s lived in/entered an American city anytime after the year 2000 or so. The scene gets bonus points for donating generations upon generations of future viewers small, specific patches for their worldview quilts — the bit about knowing you’ve found someone special when you can just shut the fuck up and comfortably share a silence, the bit about how much you just love coming back from the bathroom to find your food waiting.

Welcome to the cinema of Quentin Tarantino. We open on a bunch of suited crooks in skinny ties, concluding a meal with cussing and pop culture chatter. We slowly circle their breakdown of “Like a Virgin,” replete with a questionable reference to bubble gum. We see worldviews (“I don’t tip”) seamlessly plugged into a conversation about nothing. It’s so luxuriant — nearly eight minutes’ worth of luxuriant — and mesmerizing, despite the fact it holds no bearing on the film’s barely-there plot. Plot’s not necessarily the point, friends.

5. Jackie and Max in the kitchen, Jackie Brown

There’s no better morning than listening to the Delfonics with Pam Grier. Five completely lovely minutes, so subtly played. Something about being in a diner screams “LIFE-CHANGING MOMENT TIME” to Tarantino. Is it the way the light bounces in through the blinds? Is it the interchangeable waitstaffs and what they say about the human condition? Dunno, but this diner scene transcends Reservoir Dogs’ career-tone-setting, pop-culture-obsessed banter. Tim Roth and Amanda Plummer dance through a deft mix of heist film homage, stand-up comedy act, philosophy seminar, cigarette commercial, lesson in criminal success, and rom-com. And then the way Tarantino freezes Plummer’s lips as “Misirlou” kicks in … it’s just … so goddamned endearing. Pressing “play” on Pulp Fiction is an identical sensation to pushing “play” on a favorite album and hearing that flawless opening song and how alive it makes you feel.

Our introduction to Colonel Hans Landa, a.k.a. the Jew Hunter, a.k.a. Christoph Waltz. He’s the most simultaneously morally repulsive and charming character Tarantino’s ever written (perhaps barring Calvin Candie, but I’m inclined to vote Landa), so it’s only right we get to know him at the kitchen table. No food is ingested, but a beverage (glass o’ milk) is certainly drained in a Pulp Fiction throwback. The sneakily escalating situation, the language-hopping, that strange ability Denis Ménochet has to convince us he actually isn’t Liev Schreiber — this scene is essential. It’s also a great opportunity to see if you can keep your eyes from blinking for more than 16 minutes.

How did we get from Madonna to phrenology? Excepting a couple of cuts into the kitchen and a quick dip into the study, we’re at this fucking ulcer-giving table for 23 harrowing goddamned minutes. DiCaprio, who actually smashed his hand while filming, is horrifying on so many levels (OK, at least three levels). It’s the most uncomfortable moment in Tarantino’s catalog, and it builds with a supernatural knack for tension. Tarantino’s newest classic.

Something about a burger being in the center of the scene inspired Samuel L. Jackson to delivery every line as memorably as possible, peaking with the immortal, “MMhmm — this is a tasty burger.” Never have more pedestrian words felt more like a key to all life’s questions. (Theory: It’s the Big Kahuna Burger itself that drives Jules to such a grammatically irate, murderous rampage.) Forget “I drink your milk shake” — I drink your Sprite, and damn, that hit the spot. Travolta pacing and smoking in the kitchen, mumbling “ain’t hungry,” adds a final veneer of perfection to a scene already lacquered with it.

Zach Dionne (@ZachDionne) thinks of Budd every time he drinks from a Mason jar. Reach him at zachdionne@gmail.com.