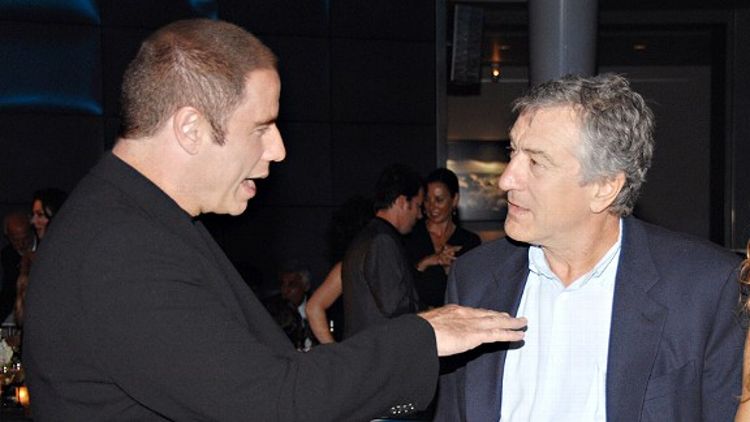 Robert De Niro and John Travolta will co-star in the thriller Killing Season, to be directed by Ghost Rider’s Mark Steven Johnson. It features De Niro as a retired military guy living in a cabin in the woods and Travolta as a European tourist who befriends him; eventually, it turns out Travolta is a Serbian soldier seeking revenge. That actually sounds pretty cool, but let’s not forget that the last time De Niro teamed up with a fellow legend with whom he’d never shared significant screen time, it with was with Pacino for Righteous Kill, and we all agreed that was an utter disaster. [Deadline]

Soul of the South Network, a new channel targeting African-Americans, plans to spend $10 million to be in 50 markets by early next year. The full slate of programming hasn’t yet been announced, but it will feature a show about family reunions, a show about music at mostly black colleges, and a daily five-hour news block. When reached for comment about the new competitor on the block, BET CEO Debra L. Lee just squinted while slowly running her index finger across her throat. Grade: B [HR]

CBS will adapt Life Isn’t Everything, a long-running Israeli sitcom about a divorced couple who can’t help but continue to be involved in each other’s lives, with original show creator Daniel Lappin onboard to co-write the American version. This is part of a mini-streak of Israel-to-U.S. adaptations, including In Treatment, The Ex List, Traffic Light, Homeland, and, of course, the massive hit Moshe and Avner’s Happy Hummus Fun Time Variety Hour. Grade: B+ [Deadline]

Fox is bringing back In Living Color next season for two half-hour specials with the option to pick up the show to series. Keenen Ivory Wayans will return to produce; also, the new cast of “fresh, young talent” will be made up entirely of second generation Wayanses. Grade: A [HR]

Kirsten Dunst and Orlando Bloom have joined Clive Owen in Cities, a thriller with interweaving storylines — including one about a Mumbai policeman and one about a New York City hedge fund manager — set before the stock market crash. Not really clear on the details here, but considering the movie’s financial crash association, let’s go ahead and assume that Dunst plays Lloyd Blankfein? Grade: B- [HR]

Joel Kinnaman is moving on up! The Swedish star of AMC’s The Killing has landed a high-profile movie role as Lancelot in Wedding Crashers director David Dobkin’s Arthur & Lancelot. Kinnaman, who wrapped a sequel to his 2010 Swedish hit Snabba Cash, is also doing a second season of The Killing and the Denzel Washington movie Safe House. Watch out, Bjork: Joel Kinnaman is coming for that “World’s Most Famous Scandinavian Pop Culture figure” belt. Grade: A- [HR]

Bill Murray will join Roman Coppola’s A Glimpse Inside the Mind of Charles Swan III, the indie starring Charlie Sheen as a successful, womanizing graphic designer undergoing a breakdown. As Showblitz points out, Murray is very selective when it comes to movie roles. That either means Bill thinks Charles Swan is going to be great, or Bill thinks Charlie Sheen still has the best cocaine. Grade: A [Showblitz]

Trailers of the Week: Mission Impossible 4, The Muppets, and Into the Abyss