Rick Ross Got Shot At, Crashed His Rolls-Royce Into a Building, Had a Birthday Party 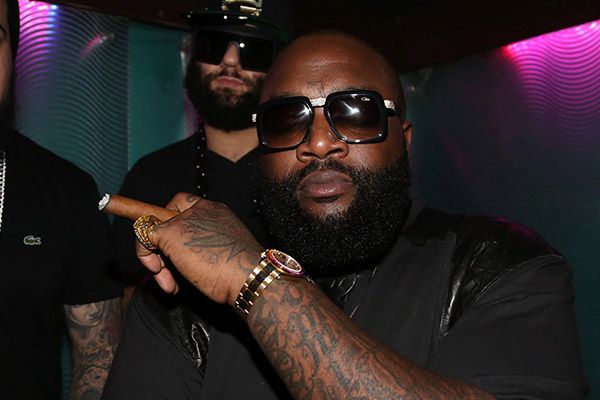 You gotta wake up pret-ty ear-ly in the morning to outdo Rick Ross. In the hours spanning, roughly, from “late last night” to “real late last night” to “early today,” Ricky managed both to throw a star-studded Club LIV birthday extravaganza and survive a drive-by shooting completely unscathed. This is a news story that is simultaneously violent, preposterous, factually muddy, and as peculiar as it is entertaining. In other words, it’s consummately Rozay.

Hours before the shooting, Ross was celebrating his 37th birthday at LIV, in Miami, alongside such friends and luminaries as Diddy, Fabolous, and French Montana. (DJ Khaled’s presence has not been accounted for, but I would bet the naming rights to my first-born child that he was among the assembled bottle-poppers.) Later, at around 5 a.m., Ross was reportedly in his Rolls-Royce, driving himself and the designer Shateria Moragne-El (who is apparently his girlfriend) through Fort Lauderdale. Another car pulled up alongside the Rolls and unknown assailants opened fire. Dozens of shots were fired but, somehow, all missed the car; meanwhile, while swerving to avoid the gunfire, Ross crashed his car into a building. And yet, somehow, both Ross and his lady walked away with no reported injuries. Either Ross has years of Mario Kart experience to thank, or he’s one lucky bastard.

Here’s the local news report on the incident:

As you can see, they don’t name Ross, identifying the driver only as a “famous rapper.” That’s true, and also way too reductive. Because, of all the galaxy’s “famous rappers,” Ross — he of the tenderly constructed identity — is probably the one for whom a post-birthday shooting/car wreck is trickiest to parse. Like, if Jay-Z crashed the whip with Beyoncé in the passenger seat at the break of dawn after getting shot at — well, that’d be insane, and we’d be talking about it forever. (Where was Blue Ivy? Who was watching Blue Ivy?!) But it’d ultimately be a binary thing. Is Jay-Z living a double life full of criminal elements and nefarious intrigue and backrooms flooded with cigar smoke? Or was the crash a bizarre but explainable aberration, one that echoes his past lives but ultimately does not contradict his position as the upstanding titan of hip-hop industry? With Ross, though, we’re back again to trying to point out the squidgy lines of his fiction.

50 Cent, both a veteran Rozay combatant and a master troller, was first out the gate with the unfounded allegations — via Instagram, of course. 50 put up an image of the crashed Rolls, with the caption “Hahaha fat boy hit the building? lol it looks staged to me. No hole’s in da car.” The theory being floated is that Ross, forever looking to boost his gangster cred, would fake the whole thing. Like the famed behatted gangsters of yore (or like Israel’s Nissim Alperon, who just walked away from a mind-boggling ninth assassination attempt), the more times he cheats death, the bigger of a bawse he truly is.

There’s no particular reason to believe the conspiracy theory. For one, the lack of holes in the car is explained by the initial reports that say the shooters missed, as Ross swerved away and into a building. For two, our source is 50 Cent’s lol-riddled Instagram. This is more about how we’d want to believe that it’s true.

The last time Ross + Violence came up, it was Ricky canceling a tour shortly after threats from the Gangster Disciples. That whole thing was about Ross appropriating the name of GD leader Larry Hoover, to the chagrin of Hoover’s, uh, Disciples. Ricky was already caught up in the threat of real violence for borrowing details to burnish his fake stage persona. Is it that crazy to think the next step in persona-crafting would be staging a real (fake) incident?

I mean, I’d love if that were true — seeing Ross take his act from the studio to a The Game/Synecdoche, New York–like real-life-as-movie-set place would be incredible! But, wait, what the hell are we talking about? No. That is not what happened. Ross got shot at, presumably by someone trying to carjack him, or possibly by some representative of the aforementioned and aggrieved Gangster Disciples. It’s a scary and nearly tragic incident, and I hope Ross takes all proper precautions to remain as safe as possible going forward.

And now (via Jonah Weiner), here is an image of Bart Simpson as Rick Ross: