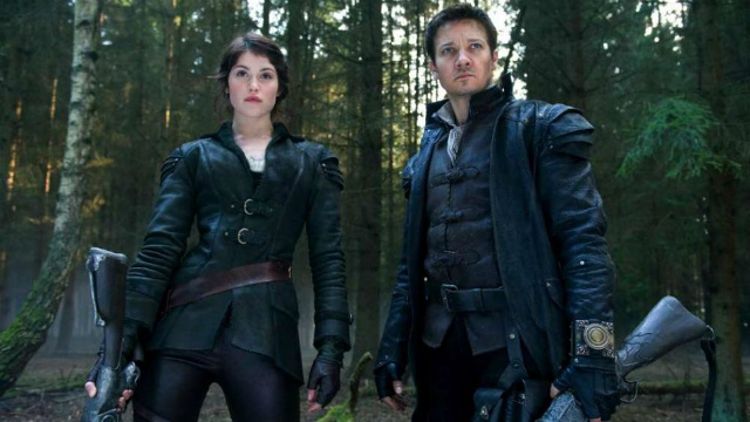 With few exceptions, such as the mid-January release of Best Picture nominee Zero Dark Thirty, the two-month period between the New Year and the Oscars is Hollywood’s wasteland, a long stretch of bad cinematic road where it casts out its unloved misfires, its low-achieving genre fare, and, occasionally, its hidden, wolf-punching gems. We call this time “Dumpuary,” and from now until the Academy’s final statuette is handed out, our Dumpuary Movie Club will shine a light on the soon-to-be-forgotten films cruelly languishing in the shadow of awards season. This week: Hansel and Gretel: Witch Hunters.

I know that we all probably would like some time to peel back the many beautiful layers of what we’ve all just experienced together and ruminate upon its meaning, but I feel like there’s also value in jumping in while it’s still fresh in our minds, and before our opinions can be colored by the many, many “worst movie of the year” pieces we’re about to read.

Shit, they’ve already gotten to him. I better send this e-mail right now.

[Sigh.] I guess I let myself develop higher hopes for something that began with two children stumbling upon a mossy, candy-encrusted death-vagina in the middle of the woods, then burning a witch to death inside it, just like in all my favorite fairy tales.

Dan Fierman: One crucial lesson I hope we all learned: If local government weren’t so soft on witches, we wouldn’t have issues with broom theft, child kidnapping, and steampunk-driven crypto-plots that go absolutely nowhere.

What a waste. I know the word “reimagining” is second only to “Billy Crystal” in the Hollywood Hell Lexicon, but there was actually potential here. I’ve got a 5-year-old and I’ve started reading him the old, wrath-of-God, no-seriously-don’t-go-into-the-woods, here-there-be-monsters fairy tales — and I have to say, that shit is SCARY. I think what they were aiming for here was Evil Dead 2/Army of Darkness–era Raimi. Where they ended up was in a hellish intersection between camp, gore, and straight-to-video action. My head hurt by the end.

Alex Pappademas: I think you’re all willfully ignoring the important message this movie has for all of us, which is that witches (i.e., women) are deceitful monsters, and when the Coming of the Blood Moon brings out their true dark evil selves — and we all know what that’s like, right, guys? — it’s incumbent upon us to kill them with our anachronistic Gatling guns.

(No, seriously, there is actually an exposition-exchange in this script where we learn that there’s a phase of the lunar calendar when all the witches start acting extra-witchy and it’s called the Blood Moon.)

I could go off about how this is an example of Late Tim Burton calcifying into its own genre, but I have given Burton enough wedgies on this site already, and anyway, nobody cares. Instead I’m just going to ask you guys a question: Who is this movie for?

My theory about quippy and in-your-face-violent “reimaginings” like this is that what they’re generally selling is a reconciliation between our infantile desire to go on playing with our childhood toys and the shame we feel about that desire now that we’re adults who recognize that those toys were shitty plastic things manufactured by slaves and designed to break, by people who cared so little for their audience that they’d sign off on a Han Solo figure that looked like an anorexic Ken Burns. Anytime a movie or TV show or other licensed entertainment property trumpets the fact that it isn’t your daddy’s Batman or your older brother’s G.I. Joe or your creepy uncle’s Star Trek or you-from-five-years-ago’s Spider-Man, what it’s really telling you is to ignore the inner voice that says “I’ve outgrown this.”

The whole this-isn’t-some-uncool-older-person’s-whatever genre, the whole practice of rebooting things to bring them in line with contemporary standards of effects-realism and meanness and moral ambiguity — that’s occasionally the result of people trying to do good work with the corporate trademarks that compel them and maybe even interrogate that compulsion a little in the process, and on really rare once-in-a-blood-moon occasions it produces something on the level of a Dark Knight Returns, but most of the time it just leads to this dumb, performative “edginess” without an ounce of sense or feeling behind it.

And I totally understand why it’s comforting to have someone sort of spackle over the gulf between our desire for comfort food and our desire for things that make us feel like cool, edgy nihilists. I understand Don’t worry — this superhero comic isn’t children’s entertainment, somebody gets raped on page 8, because this superhero comic knows you’ve learned a thing or two about how this cold, harsh world really works since the last time you checked in with the Micronauts as a marketing strategy. But I still have a hard time picturing the person whose needs this movie was supposed to meet. Did market research somehow point to the existence of a secret underground of real tough manly MMA-watching dudes whose love of fairy tales has heretofore dared not speak its name? Or are we purely in “bacon-flavored Sprite” territory here, where the existence of the technology to make something leads to the thing being made even if nobody’s ever wished for it?

Honestly, “adult Hansel and Gretel saying cool trailer lines and blasting the shit out of witches with steampunk sawed-offs” feels like a Ben Stiller Show parody of reboot-o-mania, and there were moments when I almost wanted to honor this movie’s errors as hidden intentions and let myself believe it was a cranked-to-absurdity send-up. But minus a couple of deliberately Shatnerian line readings on Famke Janssen’s part, there’s nothing in it as funny-on-purpose as the Ye Olde Missinge Childrene flyers wrapped around the probably-also-anachronistic milk bottles, and that’s like five minutes in. By the end I hated myself for agreeing to go see this almost as much as Jeremy “Look, Me and My House-Flipping Partner Are Underwater on a Three-Bedroom Spanish Colonial In Pasadena, Just Get Me Something That Shoots This Month” Renner clearly hates himself for agreeing to be in it.

Lisanti:For the record, when Alex says “agreeing to go see this,” what he really means is, “I was the one who suggested we see this, and I am full of shame and regret over that suggestion.”

And I wouldn’t refer to it as a “best” thing, but I was mildly amused that all the witches looked like Norwegian black-metal front men in desperate need of facial moisturizers.

(I just ran the numbers again, and it turns out that the moviegoing experience was actually 98.75 percent unbearable. If we’d gone to Movie 43, at least we would have seen some A-list actors actually enjoying their debasement. Halle Berry probably had fun jamming her breasts into that guacamole. Renner looked like he was calculating every scene in terms of how many square feet of Italian marble backsplashes he was going to buy the minute he wrapped.)

Robert Mays: I agree that the franchise-setting ending was the best part, but I have a very important question about that last scene (which, for anyone who’s curious, involved Hansel, Gretel, and the Ron Perlman troll finding witches in a sand castle): Why the hell wasn’t this the entire movie? I don’t know how many complaints I would’ve had if this had been 90 minutes of stylized, increasingly creative witch deaths mixed with Jeremy Renner occasionally, and accidentally, remembering what movie he was in.

Also, can any of you guys explain to me the gaps in technological advancements going on here? Renner is blowing away legless witches with a Gatling gun, but the kidnapped children are being kept in wooden cages? Was Hansel actually da Vinci? I need answers.

I shared Alex’s assumption that this was the result of some underwater real-estate investment or a bit of self-flogging involving not ending up in The Master as originally planned. But this performance wasn’t slumming. It wasn’t even going through the motions dreaming about the infinity pool that it would buy. I got the distinct and troubling sense that Jeremy Renner was TRYING in this movie.

Sean Fennessey: Forty-eight hours of my life have now passed since this screening and I am still unwhole. But as we recount witch limbs exploded, line readings Shatnered, leading men felled, and homes in balmy climates purchased and flipped, let us not forget where this movie came from. As we exited, I wondered aloud about the budget. I thought I’d heard it cost joint producers Paramount, MGM, MTV Films, and Will Ferrell’s Gary Sanchez Productions (um, how are all of these places responsible for this?) $75 million. I was wrong; it was $50 million. And I find myself wondering not just why, but where the other $49 million went (after that pretty sweet fake-Matrix slo-mo desert sand castle witch den shootout ending). And yet, as we mock the possibility of a follow-up, this thing came in first at the American box office with $19 million. Even more notable, it opened a week earlier in Russia, where it earned nearly $8.5 million. That is the 50th-highest grossing opening weekend in Russian history. The history of all the movies that ever played theaters in Russia since, well, there was a Russia. Let that sink in for a minute. I can think of a few reasons for this — the Russians do hate a witch — but none more reasonable than Jeremy Renner, International Movie Star. (Unless there’s some sort of Famke Janssen thing happening in the former U.S.S.R., which I’m not prepared to rule out.) As for the overseas box office bona fides, let us not forget that the writer-director, Norwegian auteur (!) Tommy Wirkola, is best known for the 2009 film Dead Snow, which is about a battalion of ZOMBIE NAZIS IN SS UNIFORMS. (This at least clarifies the tonal issues in H&G — Wirkola thinks he’s hilarious, but he’s actually just an odd genre bro.) Everyone hates zombie Nazis, just like everyone hates witches. Know your audience, etc.

All this is to say, Hansel and Gretel Colon Witch Hunters is a hit. It’s already made back that budget. And what’s coming for it next weekend? Only that fresh tomato Sylvester Stallone. Good luck, Sly. Gatling Gun Renner (his important new nickname) is coming for you witches.

Lisanti: We can’t pretend to know what’s in an actor’s heart. But at the risk of impugning his dedication to a clearly doomed endeavor, I’d say that Renner’s was not thrumming with the passion of a craftsman aching to create; if you pressed an ear to his chest, you’d probably hear the faint beep of the Home Depot self-service register ringing up a box of travertine tiles. (And that, officially, is our last Jeremy Renner: House Flipper joke. It’s been a good run, everybody. See you at the open house on Sunday.) But some real Hansel talk here: He couldn’t even be bothered to affect the Official Period Movie British Accent required of the fairy tale setting, forcing Gemma Arterton, an actual Brit, to adopt a totally nonsensical American one. (Though, to be fair, it did lend some anachronistic punch to that “Eat hot lead, you fuckin’ hillbilly” line she delivered after splattering her first witch.) Even Costner’s quarter-assing it through his Prince of Thieves dialect coaching sessions seems like a Herculean achievement in comparison. Renner put more effort into shining his marble zombie eyeballs in The Avengers, but one imagines that was only after a heart-to-heart with Downey on the ways A-listers are expected to comport themselves during franchise filmmaking, even when dancing in front of a green-screen in a bodysuit speckled with Ping-Pong balls.

Renner, Renner, Renner. We could go on all day. And have. But now we’re in danger of putting more effort into this movie than did anyone with their name above the title.

Let’s stop right here and roll end credits. Stick around for them, they’re great. There’s a crossbow and everything.

Rick Ross Got Shot At, Crashed His Rolls-Royce Into a Building, Had a Birthday Party