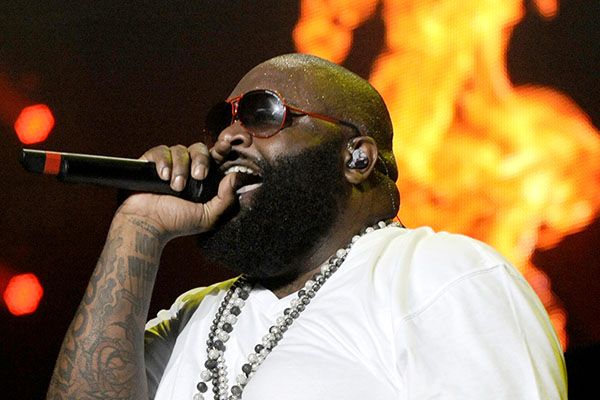 On Friday afternoon, Rick Ross announced he was canceling the remainder of his current Maybach Music Group tour. The official reason, according to his reps, is “apparent lack of organization and communication on the part of the tour promoter.” The unofficial reason is a lot scarier than poor logistics.

The MMG tour launched November 2, was scheduled through December 2, and was intended to be extended through December 16. And its cancellation came, Billboard points out, “a day after Ross canceled two shows in North Carolina … [reportedly] due to threats from the Gangster Disciples street gang.” You can see the threats online — because this is 2012, and even gangsters beef on YouTube — and they’re not pleasant.

In the video, a series of men and women, most with bandannas covering their faces, mean-mug the camera, throw up their hand signs and chant their crew name, and make it clear that Rick Ross should fear for his life. Ross’s offense, as is tangentially explained in the video, is his 2010 smash “B.M.F.,” on which he boasts: “I feel like Big Meech / Larry Hoover.” The latter, currently serving out concurrent life sentences at the supermax prison in Florence, Colorado, was the leader of Gangster Disciples, a multi-state criminal operation.

I have, you might well be thinking, seen this episode before. And I hear you. Ross’s complicated fabrications have been well documented; it’s the kind of thing that was fascinating once, but now just feels like an obligatory mention. Yes, he worked as a P.O. Yes, he makes a bunch of shit up. No, it hasn’t hindered his career. Let’s keep it moving.

But so far, the closest Rick’s come to actual retribution for his gangster appropriation is a courtroom. And when “Freeway” Ricky Ross — the infamous drug dealer from whom Rozay nicked his stage name — lost a lawsuit in 2010 (“Plaintiff alleges that his name was well known in the drug trade … This illegal activity … [does] not provide support for Plaintiff having a valid trademark for his name”), it seemed like the bearded one was set to enjoy his rap largesse, free and clear. His beef with Young Jeezy stemmed over “B.M.F.,” too — Jeezy really does know Big Meech, and he’s made it clear, “it’s over for you clowns as soon as” his dude “hits them streets.” (Demetrius “Big Meech” Flenory is currently scheduled for release in 2032.) But that never want further than some not-particularly-high-profile diss tracks. Now, though, Rick Ross is being threatened with a punishment of the physical kind. It’s the Alabama chapter that has called out Ross, although they make it clear he should be vigilant for threats throughout the country.

In his statement, Ross doesn’t mention the threats as a factor in the tour cancellation. All he said was “I want to apologize to all of my fans who I missed performing for due to the cancellations and want to let them know that I will get back to their cities. I enjoyed my experience with my little bros Wale and Meek Mill and I’m ready to get back in the studio to make good music.” And so it might very well be true that the Gangster Disciples have nothing to do with the cancellations. But if this is about Ross taking the threats seriously, I’m glad he’s made that choice. No one wants to see anyone get hurt. This should be about security, not looking tough.

And so, a story line we thought was fully chewed and digested has just gotten an odd new twist. Peculiarities have always trailed Rick Ross’s career: This is the man who managed to turn a double-seizure into a WingStop promo opp. But now he’s basically living out the plot of CB4. Gusto’s out of prison, and wants his damn money.

It’d probably be fruitless to try and point out the nuance in “B.M.F.,” but in all fairness, he is being upfront about his appropriation. Ross only said he thinks he’s Larry Hoover.