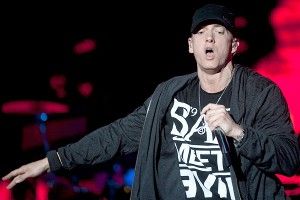 The fests, going down in August, don’t traditionally shy away from throwing a non-Brit act in the mix at the top of the bill. Along with Blur, Black Sabbath, and Arctic Monkeys, another rumored 2013 headliner is Green Day. In 2012, also atop the bill with Kasabian and the Cure were Foo Fighters. But Em getting the gig is notable in two parts: First, Reading and Leeds haven’t seen him play any part of the bill since 2001, the year of The Marshall Mathers LP. That night, he brought out Marilyn Manson to do “The Way I Am,” which is just a very 2001-y thing to do. (Side note: Hope they’re not expecting 2001 Eminem!)

Second, rap doesn’t usually get this kind of showcase at these British super-fests. When Jay-Z was booked for Glastonbury in 2008, Oasis’s Noel Gallagher slagged off the choice, saying “I’m sorry, but Jay-Z? No chance … Glastonbury has a tradition of guitar music … I’m not having hip-hop at Glastonbury. It’s wrong.” Of course, Jay ended up winning the day. He came out at Glasto with a guitar slung around his neck and led the crowd in a shaky “Wonderwall” singalong. Wonderful.

Clearly, Jay’s triumphant performance that night changed some minds about exactly where rap “belongs”; now let’s hope Em can follow in his footsteps, and keep it moving forward. I guess what I’m saying here is, Marshall, do you know “Cigarettes and Alcohol”?