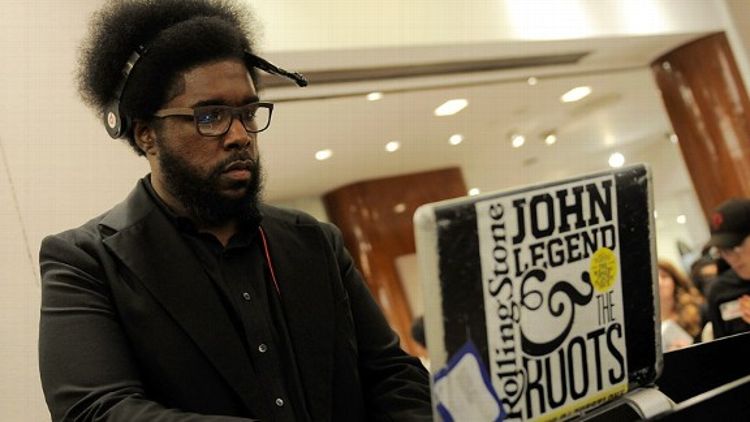 In the last eighteen months, all while very much under employ of Late Night with Jimmy Fallon, the Roots have managed to write and record three albums. The latest in that string, the upcoming undun, is also their most ambitious ever: it’s a concept album inspired by Sufjan Stevens, the Guess Who, and a list from a 1999 issue of SPIN, about a young man corrupted into a world of crime. (There are also weekly video accompaniments dropping). And the amount of content that has actually seen the light of day, by the way, only scratches the surface. In the new issue of Rolling Stone, drummer and band leader Questlove explains that during downtime on Fallon, while working in a studio space at 30 Rock, the band makes “On average … between three and 11 songs every day.” Yes, that is a shame-inducing amount of work and achievement! Which only makes Questlove’s latest trick all the more impressive.

As the New York Times points out, by dint of his hard work (and, OK, the fact that he randomly happened to be at a particular spot at a particular time), Questlove was able to alert the Occupy Wall Street movement in advance to the police crackdown that took place Monday night. Late Monday, he tweeted “Omg, drivin down south st near #ows. Somethin bout to go down yo, swear I counted 1000 riot gear cops bout to pull sneak attack #carefulyall” In response, movement organizers tried to explain it away as a shift change, or possibly as action from the Dark Knight Rises set. But Questlove, diligent in his journalistic ways, pressed on: “ok once again. South St in NYC. blocks from #OWS. saw a GANG (like at least 500+ geared up) standing in line gettin ready for somethin.” Also: “@OccupyWallStNYC if its shift change so be it. they always watch yall in the thousands like that?” And finally, when the sneak attack he reported did in fact take place, and was then broadcast via mainstream media, sweet vindication for Q: “@OccupyWallStNYC wait. so i was right? #ows is being raided? told yall! tryna make me think i was crazy! i knew i saw what i saw.”

So, what’s next for the accomplished musician/producer/DJ/TV band leader/comedy sidekick/reporter? Taping a “how to chiffonade” YouTube tutorial?